Compared to the G1 and G2 molds, the G3 Walking Arabian hasn't been used much, but it still has a good number of look-alikes. 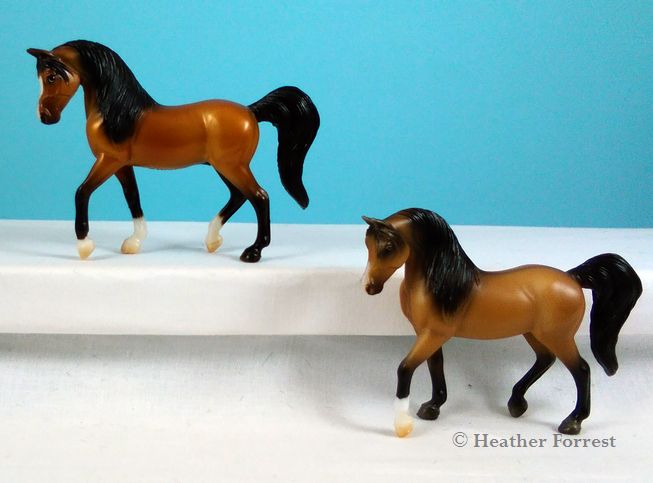 Stablemate Assortment #5906 Arabian - Bay (2006-08) was also released in the Horse-A-Day Calendar (2009-2010) which was sold through various retailers, especially large chain book stores. This model is a clear, golden toned bay with three socks (not near-hind), star, snip, and eye-whites.

#5962 Mystery Foal Surprise Gift Set (2012-Current) is similar in colour to #5906, but is lighter, more tan, and is not metallic. It has a sock on the near-fore leg and a large snip. This model also has a dorsal stripe, so you could call it a bay or buckskin with counter-shading or bay dun. 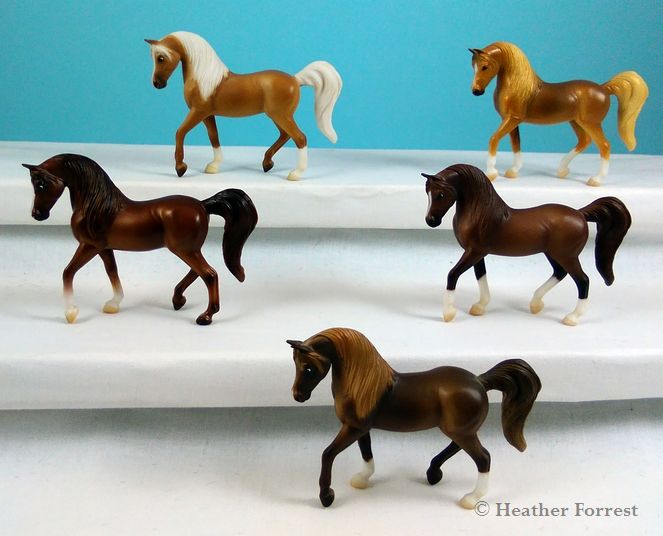 JCPenney #410176 Stablemates Parade of Breeds - Arabian (2006) is a metallic, orange-toned flaxen chestnut with golden highlights. This model has a blaze and four socks.

Play Set #5503 Stevie & Belle Set: Found Horse - Garnet (2008-11) is very similar in colour to the model above, but the colour is more brown-toned and is matte, not metallic. It has four socks, a blaze, and eye-whites.

Stablemate Assortment #5907 Arabian (2009-11) was also released through Rural King in #701850 Stablemates Country Stable Barn (2010). This model is a flaxen liver chestnut with off-fore and near-hind socks, snip, and eye-whites. 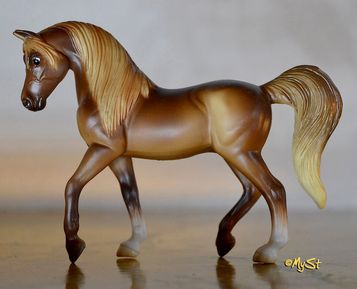 Gift Set #5397 Horse Crazy Gift Collection (2015-Current) looks almost identical to #5907, but the gap between releases and the airbrushed socks means that these are not the same model, just similar.This model is a flaxen liver chestnut with snip, eye-whites, and air-brushed off-fore and near-hind socks. 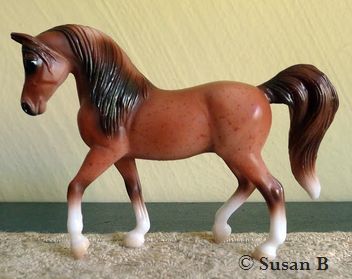 Tractor Supply Co. #701733 Open Road Adventures (2015) is the only roan G3 Arabian thus far. It is a strawberry-coloured roan with shaded mane and tail, four airbrushed socks, eye-whites, and blaze. 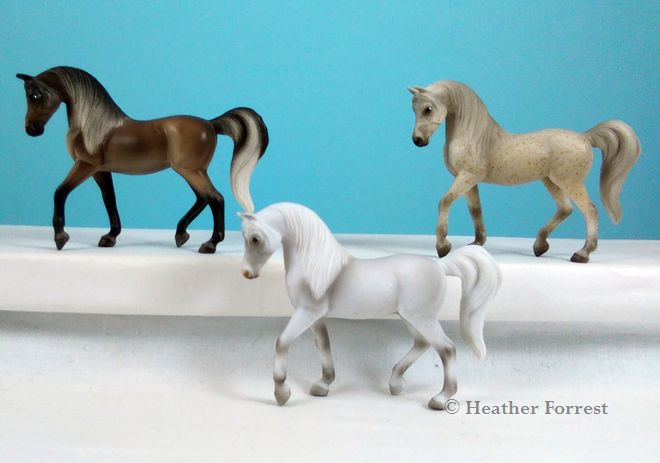 #5601 Rose Grey Arabian and Foal (2008) was sold through Tractor Supply Company and other retailers and is a rose grey with shaded white mane, striped white tail, four black legs, snip, and eye-whites.

JCPenney #410436 Stablemates Parade of Breeds - Arabian (2008) has a slightly grey body with chestnut flea-bites, grey shading on the joints and in the white mane and tail, and eye-whites.

Stablemate Assortment #6027 Arabian (2015-Current) is a white grey with slightly darker grey shading on the body, joints, and tail. 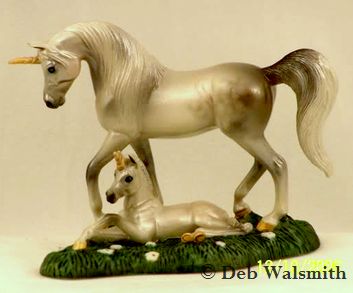 BreyerFest Breyer Store Special #711075 Isabel and Chloe (2005) is pearly white grey with darker shading and dapples on the hindquarters and a gold horn. This set is porcelain.


Many thanks to Deb Walsmith, Susan B, and MySt of My Stablemates for providing pictures for this post!