The G1 Seabiscuit had a whole lot of brown going on which made for quite a few look-alikes. 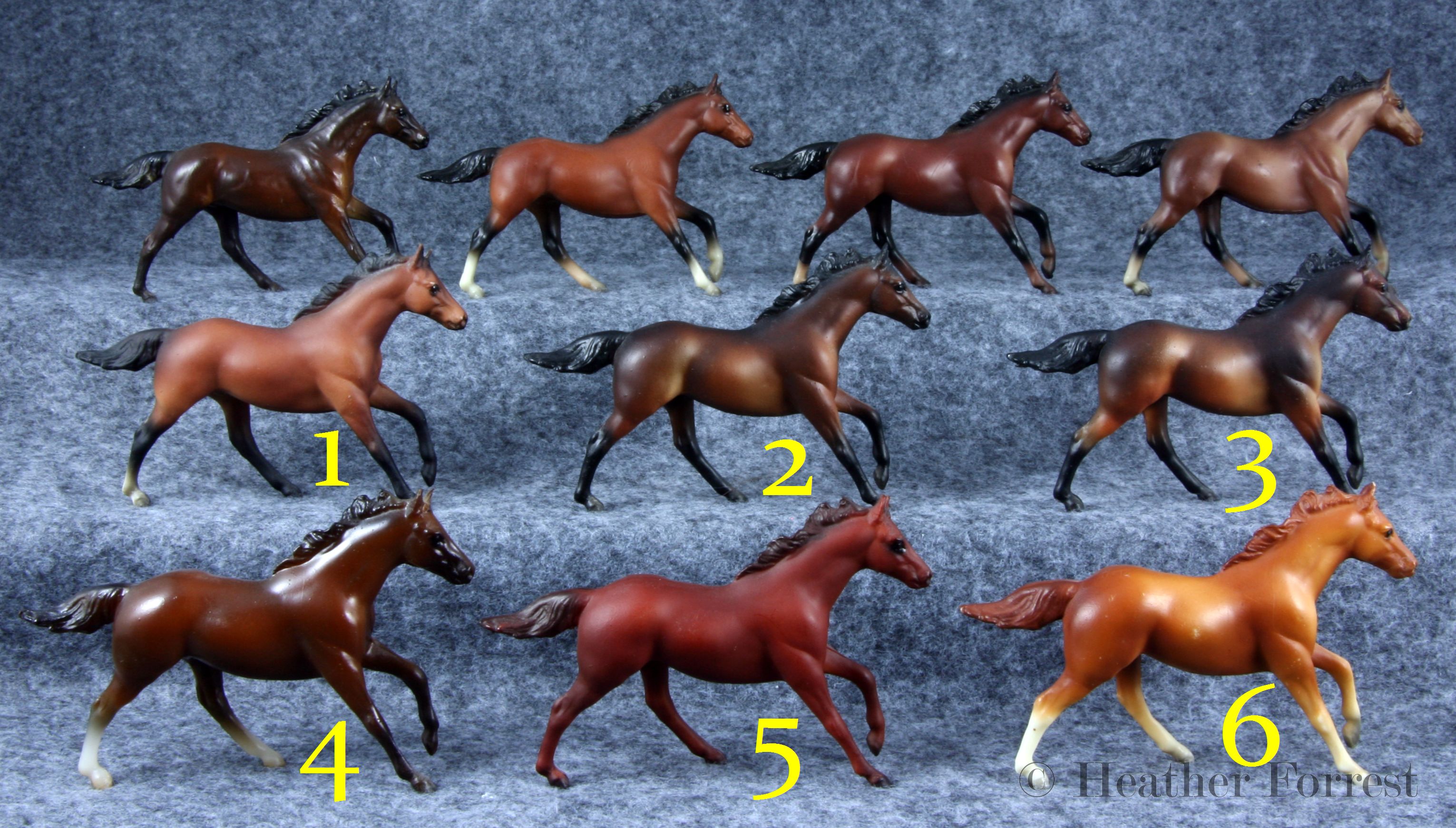 The top row consists entirely of variations of the original Seabiscuit release. Colour ranged from light to dark, semi-gloss to matte, none to four leg markings, and the bay coat could be gold, tan, or red toned. All models were made with old plastic.

#1 looks as if it could be an original Seabiscuit variation, except for one small detail, this 1996 JCPenney special run is made with new plastic.

Numbers two and three are basically the same model: one was released as a Blockbuster special run and the other as a regular run in 2003. There really isn't a way to tell them apart as they were painted in batches at the factory and randomly packaged as either the RR or SR. The reason they look a lot like the Seabiscuits above is that they were the modern Seabiscuit release produced to capitalize on the popular new movie.

The bottom three models are all a shade of chestnut. #4 is shown in the catalogue as a highly glossy, I am not sure if matte variations exist as I have never seen one. This 1997 new plastic SR should be a dark red-brown chestnut with darker points and hind socks. My model is translucent, though opaque models probably exist.

Number five is the only old plastic chestnut, the 1989 Sears SR. The mane and tail should be darker than the brick red body and the model should be no white markings.

The leg markings on number six can vary quite a bit. My model shown here has very high whites while the leg markings on my other model are very low and vague. The chestnut colour of this new plastic Regular Run is much more orange than the others and is generally better shaded.

Though both the grey releases on the G1 Seabiscuit mold are new plastic special runs, there is really no confusing them. The 1992/94 Sears/JCPenney special run on the left is a cool-toned, rather stark alabaster while the 1998 Sears special run is a warm-toned, nicely shaded chestnut going grey.
No comments: Links to this post

The splatter technique used to put spots on the blankets of these appaloosas ensures that each model is slightly different from the others in the run.

The original ceramic Hagen-Renaker mold, #10 Mini Seabiscuit38, was sculpted by Maureen Love Calvert, and leased from the company by Breyer for production in plastic. The Seabiscuit mold was released in 1976 and was discontinued along with the other Generation One molds at the end of 2005.

During this time, Breyer released five regular runs and eleven special runs on this mold, making him one of the middle runners in the G1 mold popularity contest.