Last summer we got a look at some of the metal G1 Stablemate copies that are floating around, this time we're going to check out some of the plastic knock-offs. Over the years I have seen many, many fake Stablemates, unfortunately I usually didn't take any pictures.

One G1 Citation copy some may be familiar with is the Micro Mini-sized Ertl horse (scroll down a ways) from the early 90s. This little horse was made with rubbery plastic and came in a few simple colours. I have a few of these models, but they currently reside in my Lego bin in a storage unit in Houston.

Lori Ogozalek provided this interesting group of micro-mini scale copies. They are of a hard plastic like Britains figures and some of them are marked made in China. The standing Saddlebred Mini Whinny and the metal G1 Morgan Stallion copy are to show scale.


The poses are mirrored and altered slightly, but their inspiration is clear: 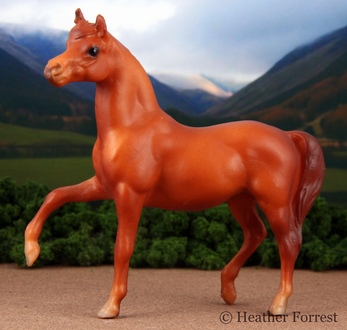 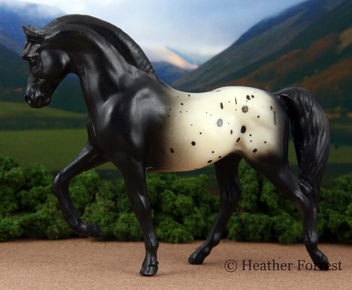 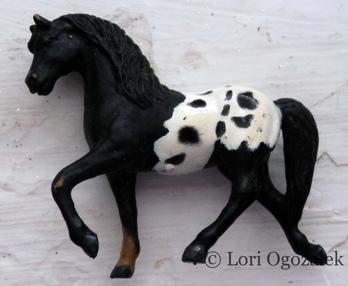 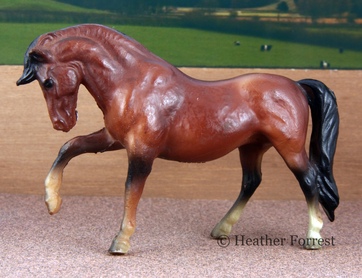 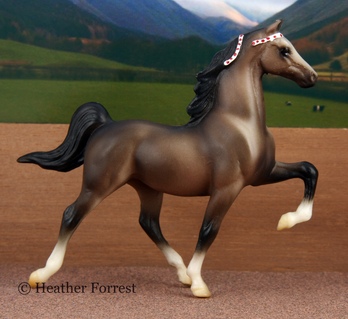 Model and picture owned by Heather Forrest.   Models and picture owned by Lori Ogozalek and used here by permission.
There are a bunch of G1 Saddlebred copies floating around eBay. In addition to the grey and the black shown below, I have also seen a dark grey with white underside, golden bay, and red bay. They are slightly smaller than the original and are made of a firm, slightly bendy plastic. 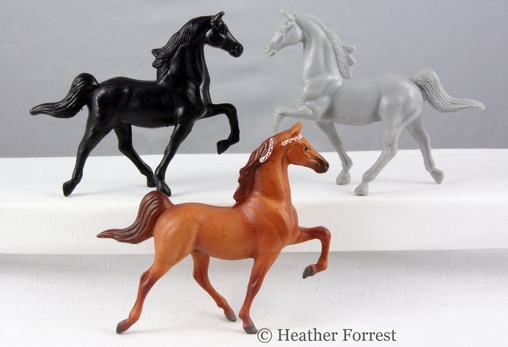 The following models came together in a pack of ten labeled "Party". They are still available on Amazon.com if anyone is interested in some rather weirdly coloured Stablemate copies. These guys are slightly larger than micro-mini scale and are a bit more bendy than the Saddlebreds above. Like the earlier copies, these guys have been altered enough to skirt the copyright law. 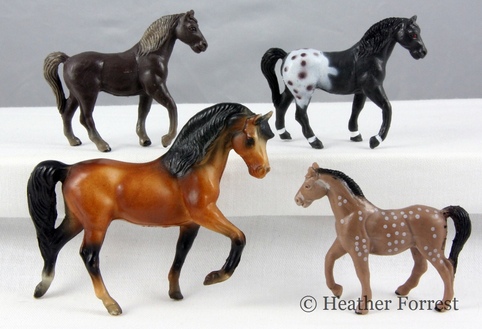 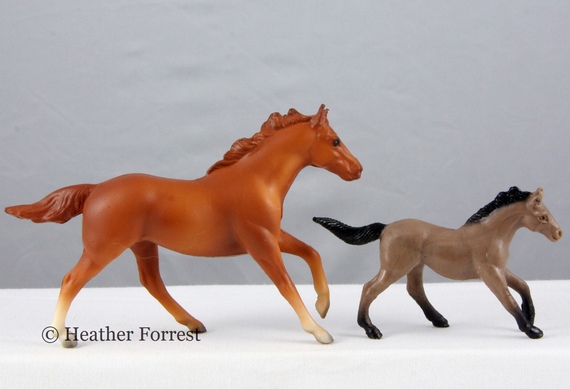 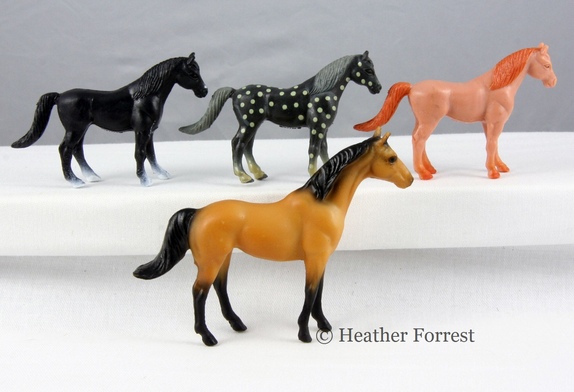 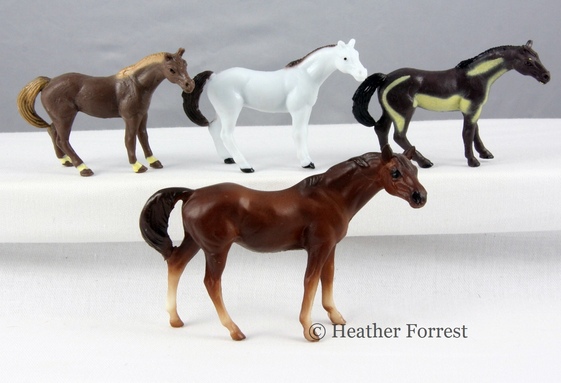 These guys aren't copies of Stablemates, but they are mini copies of some other Breyer models. Anybody recognize them? 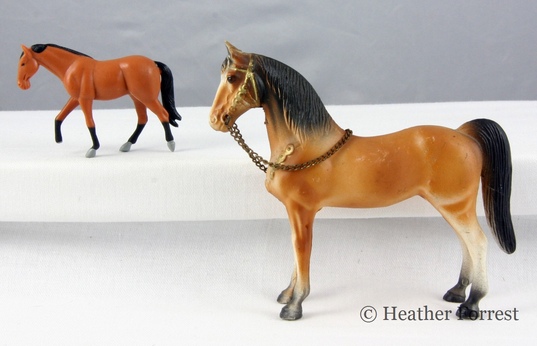 The Mini John Henry is slightly larger than Micro-Mini size and the Mini Western Horse is a big bigger than Stablemate Scale.

Many thanks to Lori Ogozalek for sharing her plastic knock-offs!

The G1 Swaps came in a fairly wide variety of colours, but he still manages to have some confusing look-alikes. Most of the look-alikes are different enough not to cause more than momentary confusion. The black blanket appaloosa from the 2005 regular run play set and the 2004 special run gift set is not included below because the 2005 run was simply a re-release of the 2004 model.

The chestnuts and bays are fairly straight forward. Plastic type for the most part is a simple identifying feature and the colours are dissimilar enough to be distinctive. 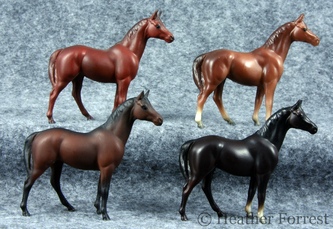 The first model is the 1995 regular run. Compared to the regular run original Swaps next to him, he is very red and usually without markings. The original Swaps can be found with a variety of leg markings, rare facial markings, and is usually brown-toned in colour. He also comes in old or new plastic while the 1995 release is only found in new.

The fourth model (bottom right) is technically chestnut as, if one looks closely, he is lacking black points, but from a distance he make a fine bay. This model is the 1991 special run and is only found in old plastic and should have a pair of fore-socks. The bay model to the left is also a special run, this time from 1996. He is of new plastic and should be without any markings. 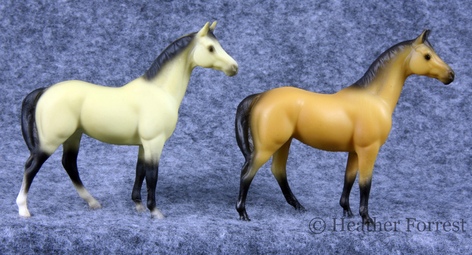 The buckskin models are both special runs, and are both only found in new plastic. The first model is the 1997 special run and is a rather shocking keylime pie yellow. He should have hind-socks, white fore-feet and may come in the full range of 1997 plastic types - normal and chalky have been seen, we are still looking for a translucent example.

His companion, the 1992/94 special run, is significantly darker, though still yellow. This run should be a nice dried mustard colour with no leg or facial markings.

These two special runs fall into the creamy/greyish/dun category. 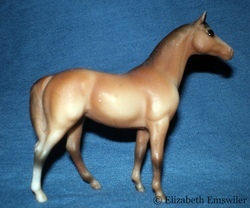 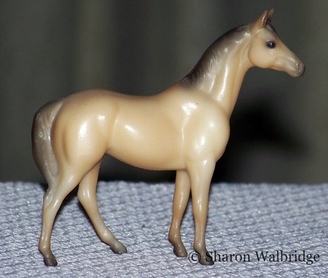 (left) Model and picture owned by Elizabeth Emswiler and used here by permission. (right) Model and picture owned by Sharon Walbridge and used here by permission.
The model on the left is the new plastic 1996 Inroads Interactive special run. Like the models above, he may be referred to as dun, but unlike the other models, he has soft grey-ish chestnut points. He should have one off-hind sock and a soft bald face.

The 1990 special run is, of course, old plastic. It usually has a semi-gloss finish and was called rose grey. Though this model looks more like a slightly off-colour alabaster, others can be more heavily shaded. All models should have some quantity of soft, peachy shading and a grey mane and tail.

The remaining greys are much darker than the models above. 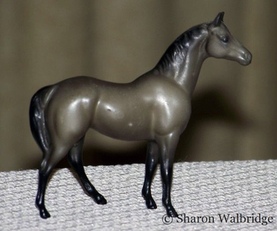 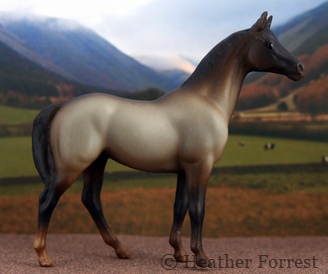 (left) Model and picture owned by Sharon Walbridge and used here by permission. (right) Model and picture owned by Heather Forrest and used here by permission.
Though both models are dark grey, the new plastic 1995 special run is more of a roan with his dark head and lighter body. He should have black points and a brown tone to his shading. His hooves and lower legs should be a reddish brown. The 1990 special run is only found in old plastic and usually has a semi-gloss sheen. He should be a uniform steel grey with black points and no white markings.

Many thanks to Elizabeth Emswiler and Sharon Walbridge for providing pictures of the missing Swaps!