The original ceramic Hagen-Renaker mold, #457 Mini Swaps36, was sculpted by Maureen Love Calvert, and leased from the company by Breyer for production in plastic. The Swaps mold was released in 1976 and was discontinued along with the other Generation One molds at the end of 2005.

During this time, Breyer released four regular runs and thirteen special runs on this mold, putting him around the middle of the pack in the G1 mold popularity contest.

Gift Set: What's With All the Fanfare?

In 2000 Just About Horses subscribers were offered the opportunity to purchase an exclusive special run on the Traditional sized Iron Metal Chief. The run consisted of the big four decorator colours (Wedgwood, Florentine, Copenhagen, & Gold Charm) which would be distributed as a gambler's choice - you wouldn't know which one you had until you opened the box. All four models went by the name of Fanfare and were in celebration of Breyer's 50th anniversary. 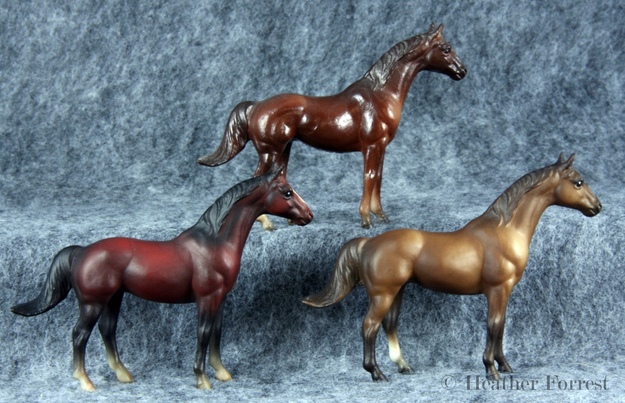 At the top is the only old plastic model out of this bunch, though it can also be found in new plastic. It's the original chestnut Silky Sullivan portrait and can be found with a variety of leg markings and with a finish ranging from matte to glossy. Colour can be lighter or darker than the one shown though they all tend to stay in the brown-chestnut range.

The red bay on the bottom row is from the Saddle Club II set. The body colour is usually that deep red wine colour. The model should have a blaze and four-ish white hooves and/or socks. This model is always new plastic.

Also only available in new plastic is the JCP/Sears SR. This model is a chestnut or bay going grey, though many folks call him grulla (black dun). The body colour is a rather smokey brown-grey with darker points and should sport a near-hind sock.

This is the other bay Silky Sullivan, the 1991 Sears SR. Though he is a red bay like the other, the colour is much brighter with a bit of an orange tint. He is also an old plastic model and should have a pair of bright white hind socks and black hooves all around. 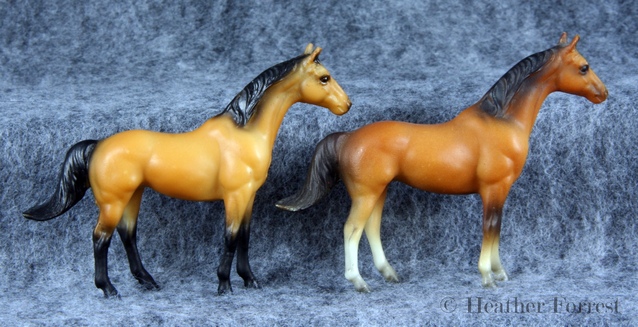 The other two old plastic models aren't difficult to identify. They are both Sears special runs - the buckskin from 1989 and the chestnut from 1990. The yellow buckskin can range from a darker tan to a much lighter yellow cream. The points should be inky black and there should not be any leg markings.

Some people call the colour of the second model chestnut, some sandy bay. Whatever colour one chooses to call it, it should be a light tan with darker points. The forelegs usually have socks below dark knees while the hind legs are usually white fading into the body colour. 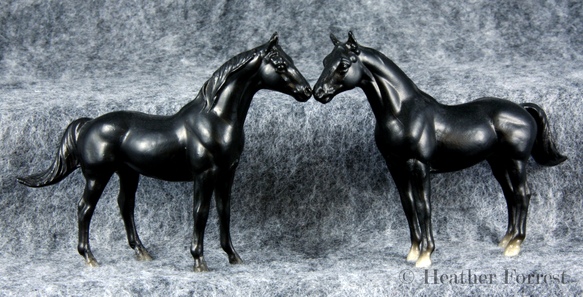 The black releases on the Silky Sullivan mold are a right pain. The first model with the black hooves is from the 1995 Stablemate Assortment while the model with the white hooves is from the 2003 Doctor's Buggy. For a long time I thought the hoof colour was the identifying feature, but I have since seen NIB (New in Box) models with "incorrect" hoof colours, forcing me to conclude that the 1995 model can have white hooves and the 2003 can be solid black. *sigh*

The 2003 model is likely just a re-release of the 1995 model. Models used in some of the other play sets at the time were also recycled from other assortments and sets, a practice which has become more common in the past couple of years (see a few of the 2015 play sets for the latest recycled issues).


Many thanks to Christine Ethier for providing a picture of her 1991 SR Silky Sullivan!