The G3 Jumper hasn't seen as many releases as some of the other molds. It still manages to produce a few look-alikes though.

#5907 Dutch Warmblood (2009-11) is an extremely dark, plum-toned chestnut. Though many people call it bay, it doesn't actually have any black on the legs. Marking-wise, the model has a small star, eye-whites, and four airbrushed socks.

JCPenney Special Run #410176 Stablemates Parade of Breeds - Selle Français (2006) is a gold-toned medium bay with a metallic glitter to the coat. It has eye-whites and a stenciled off-fore sock.

K-Mart Special Run #6126 Stablemates Gift Collection (2008) is a softly shaded wild bay or buckskin. It has a short blaze and eye-whites.

Target Special Run #720227 Pony Gals - Swedish Warmblood (2009) is a shaded brown chestnut with three stenciled socks (not near-fore) and a small diamond-shaped star. The tip of the self-coloured tail has some flaxen shading and the forelock is flaxen in contrast to the rest of the self-coloured mane.

#5501 Jump Off: Carole and Starlight Gift Set - Starlight (2008-11) is a light buckskin, though it could also make a passable amber champagne. The model has eye-whites and a stenciled blaze ending in a snip.

BreyerFest Breyer Store Special #711080 Stablemates 20th Anniversary Commemorative Set - 1990 Dr. Peaches (2009) is a red bay with golden undertones and inky black points. He has a broken blaze ending in a snip and eye-whites.

#9115 The Eight Disciplines of the World Equestrian Games - Jumping (2010) is an even-toned red bay with eye-whites, a small star, and three stenciled socks (not near-hind). 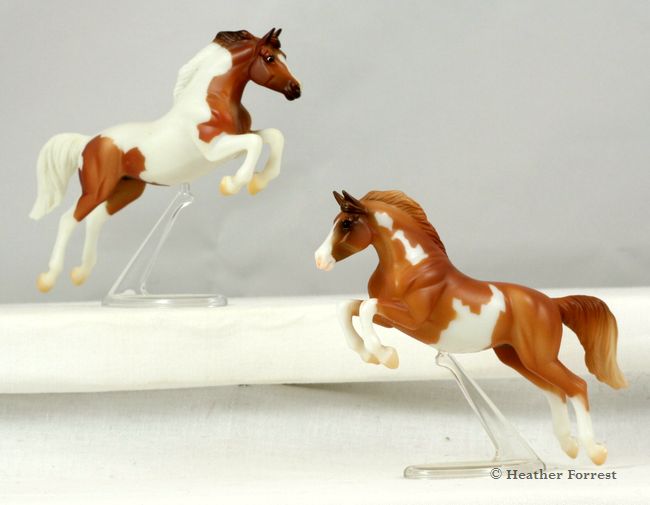 JCPenney Special Run #410436 Stablemates Parade of Breeds - Dutch Warmblood (2008) is a chestnut tobiano with four white legs, eye-whites, and a blaze ending in a snip.

#5908 Sport Horse - Chestnut Pinto (2011-14) is a chestnut splash white with flaxen shading in the mane and tail, four stockings, and a large blaze ending in a white muzzle.

The G3 Jumper, mold #5620, was first released in 2006 and was sculpted by Jane Lunger. This mold is also sometimes called the Jumping Horse or Jumping Warmblood.

The Stablemate Collections continued after the introduction of the G3 Molds with regular and special run sets. 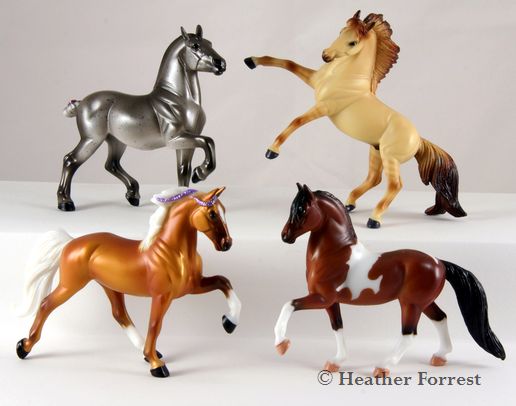 The G3 Highland Pony has a fair number of look-alikes and a couple of re-releases, too. 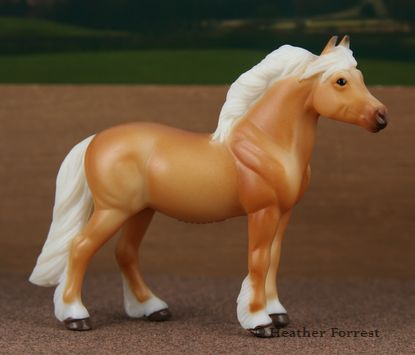