The darkest is the foal from the #5655 Stablemates Fun Foals Gift Set - 6 Pieces (2000) and also #5994 Stablemates Fun Foals Gift Pack (2001). These models are identical, the only difference in the sets is that the G1 Thoroughbred Lying Foal was removed from the later sets. This model is a very dark grey, not black, and has black points, four socks, and an elongated star.

The second foal, which could be found in Tractor Supply Company stores and at other retailers was part of the surprise release #5601 Rose Grey Arabian and Foal (2008). The colour is a slightly odd, greenish, brownish, grey. This colour could be a bay or a buckskin going grey. It has black points, socks on the near-fore and off-hind legs, a star, and eye-whites.

The shaded grey foal from #5406 Kittens & Foals Play Set (2008-09) and #5413 Horspital (2013-2014) is essentially a re-release, but the gaps in production time mean that it's not just a case of the same model being put into two different sets, but a new model being painted to look like a previously used one. The 2008-09 foal is slightly lighter in colour with a lower contrast between the grey and the white, is more blue-toned, and lacks the eye-whites of the older model. 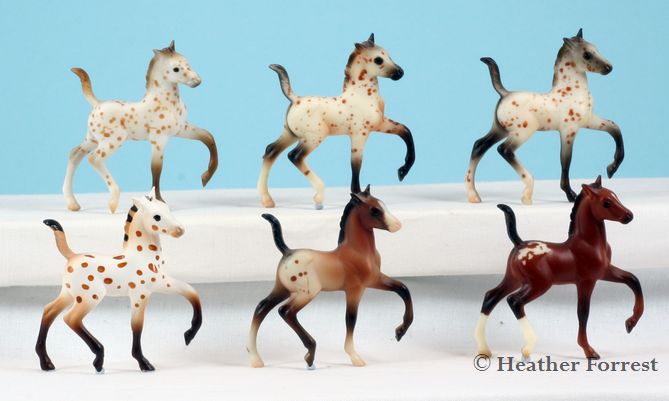 The foals along the top are all from the #59979 Horse and Foal Gift Set - Bay Blanket Appaloosa Mare and Leopard Appaloosa Foal (2003-06). The colour ranged from chestnut to bay and the splatter spots could be numerous to sparse. The shading on the mane, tail, and legs could be light or dark, chestnut to almost black. The dark forelegs and light hind-legs were fairly standard, although exceptions are possible.

#5308 Dude Ranch Play Set (2001-05) is similar in colour to the above foal, but s much more consistent in appearance. The body is painted white and covered in somewhat glossy hand-painted spots. The legs are shaded dark brown and the muzzle has just a hint of shading. The mane and tail are tan and striped with black.

The blood bay from the #5982 Stablemates Fun Foals Gift Pack (2002-06) is the most subtly marked of the foals with a tiny, lacy hip blanket and a thin blaze. It also sports a pair of hind stockings. With more of a brown-tone to his colour, the foal from #5972 Stablemates Fun Foals 5-Piece Gift Pack (2007-08) is less shiny, more matte to satin, and has a small blaze and hind stockings.

The bay tobiano from the #5412 Stablemates Horse Lover's Collection Shadow Box - Trotting Foal (2011-Current) has a "cape" style marking over his back and withers, four socks, and a star. The finish is satin to semi-gloss.

There are two minimally marked frame overo G2 Trotting Foals, the model from #5980 Show Stoppers (2012-14) is a light bay to buckskin and has white patches on the neck and barrel on both sides, a star, off-hind sock, and eye-whites.

JCPenney #410436 Stablemates Parade of Breeds - American Paint Horse (2008) is the most intricately marked of the pinto foals with a large, lacy frame overo pattern, bald face, three stockings (not off-fore) and rather startling eye-whites. The bay colour of this foal looks more like a realistic baby bay as the points are a reddish brown instead of black. 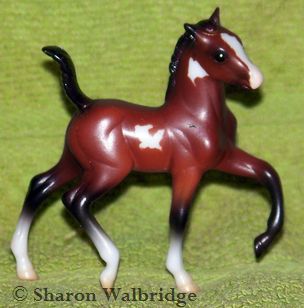 #5885 Mystery Foal Surprise Gift Set (2015-Current) looks fairly similar to the Show Stoppers foal, but it is a red bay instead of sandy bay/buckskin. It has a a large blaze, three socks (not near-fore) and smaller, more delicate markings. On the off-side the spots are on the neck and barrel, and on the barrel and stifle on the near-side. The placement of the markings can vary slightly due to human error while placing the masking stickers. Despite the age gap, the light chestnut tobiano from the #59977 Pinto Stallion and Foal (2000-02) and #300455 Truck and Gooseneck Trailer (2005) appear to be the same. Perhaps they had left-over stock they decided to use up in the later special run set. 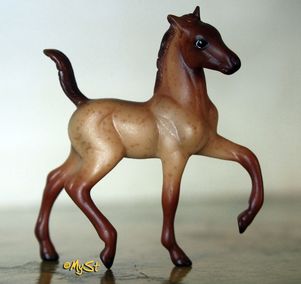 Target #720599 Horse and Foal Set (2006) and K-Mart Gift Set #6127 Stablemates Fun Foals Gift Pack (2008) are both roan foals. The Target model is a bay roan with black mane and tail, red legs, and a pinkish body with delicate, misty roaning. It has a white muzzle, blaze, and socks on the near-hind and off-fore legs. The hooves on the dark legs are grey; they're tan on the light legs.

The K-mart foal is a more brown-toned chestnut roan with a significantly darker head, darker points, and larger roaning spots. It has no markings besides eye-whites.


Many thanks to Sharon Walbridge and MySt of My Stablemates for providing pictures for this post!