As with the G1 Morgan Mare, the G1 Morgan Stallion has a whole lot of brown going on. Due to the mold's irregular release history, there are a few runs which are pretty much impossible to tell apart. Looking at the mold stamp may provide a clue in some cases, but even so you're more than likely to be left guessing at best. 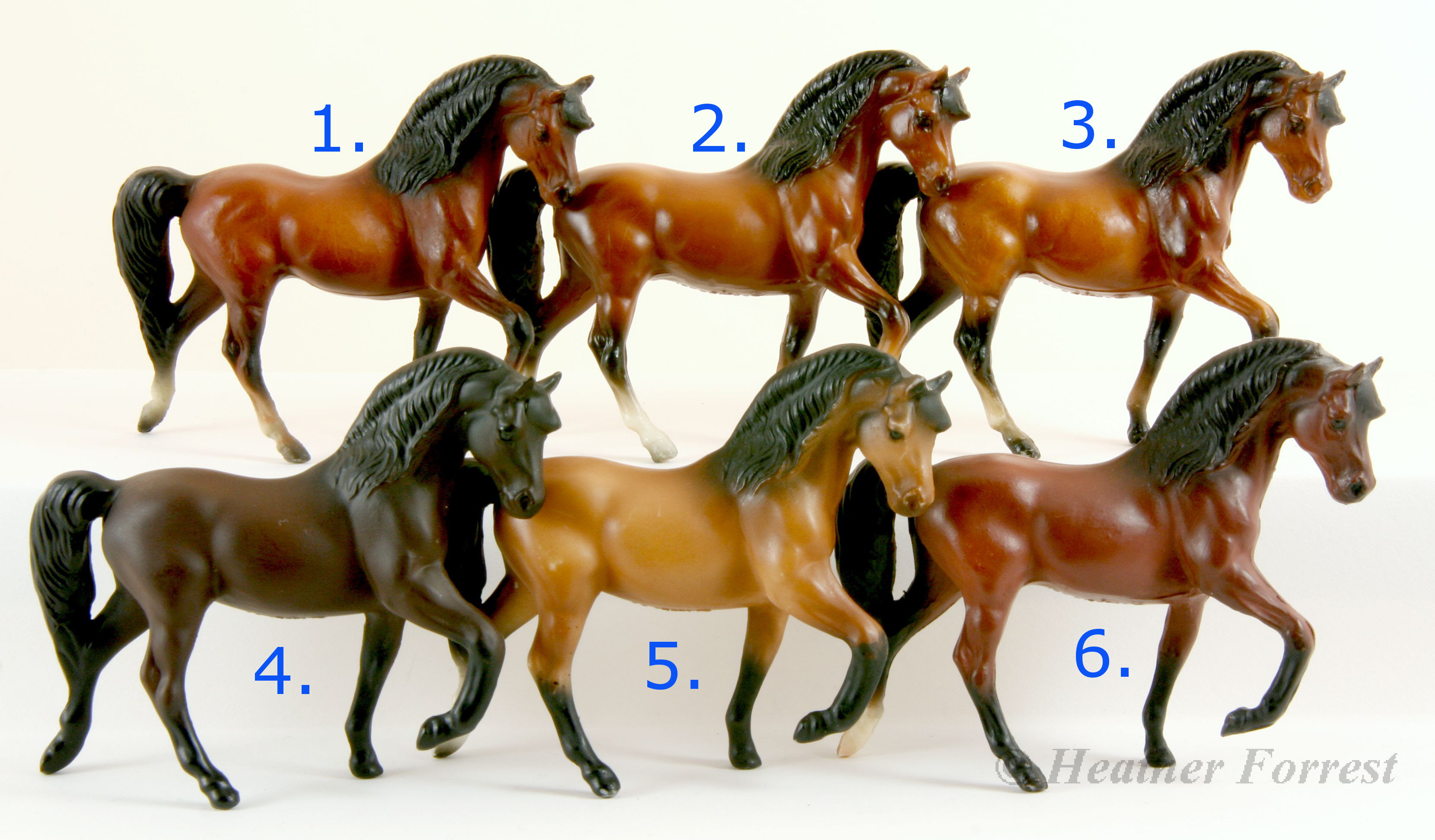 While #5013s and #5035s are all made with old plastic, numbers four through six are all new plastic, which makes it a lot easier to tell #5 and #6 from those two early runs since the variations with those early guys could get a bit extreme.

The easiest to identify is #4, one of the two Morgan Stallions from the Sears/JCPenney sets released in 1992 and 1994 respectively. Fat and thin leg versions of the 1994 set exist, but a 1992 model will be thin-legged. The thin-legged models will bear the N5+Pimple stamp while the fat-legs will have the new Big Breyer stamp. This guy is a beautiful deep, dark chocolate bay without any markings, unlike his other new plastic brethren who in the normal course of things each sport a near-hind sock.

Though several value guides list #5 and #6 as identical, they most certainly are not, though they are easiest to ID when they're next to each other. #5, #5184 from the 1995-97 Stablemate Assortment, is a soft tan buckskin or sandy bay and always has those sad, fat legs. #5650 from the first Saddle Club set is a nutty walnut brown and usually has the more refined legs of earlier releases (I say 'usually', but I've only seen thin-legs, does anyone out there have a fat-leg #5650?). Though they both sport a sock on their near-hind leg, #5184 has a black hoof on that leg while #5650 has a shell coloured hoof. As with the bays above, there's no real sure-fire way to identify numbers one through three of the chestnut group. #1 may or may not be #5037 or an old plastic #5150. Both releases have been found without a stamp and with N5 stamps, so that doesn't really narrow it down to one or the other. #5037 is the only one of the two to carry the G5 stamp, though . #3 is the 1989 special run which was just a repackaged old plastic #5037. This model should have a clean, stampless belly, but there has been at least one collector who opened her 1989 Sears set to find a chestnut Morgan Stallion with a stamp.

The only time you know for sure you have a #5150 is when, like #2 here, you have a new plastic model. You can date these guys pretty accurately since Breyer only started using new plastic in 1992.

#4, a Sears 1990 SR, though an old plastic model, is quite easy to tell from the other old plastic chestnuts as his colour is much darker and redder than the other releases, though lighter variations may exist and cause confusion.

The final model, #5 - the 1997 JCPenney SR, is the easiest of the chestnut group: new plastic, fat-legged, toasty brown, often translucent - there's no mistaking him for one of the others. Once you get away from the chestnuts and bays, things get much easier. Here we have the two alabaster releases. Up top is regular run #5016. This run is always old plastic and the body is all one colour (no dark legs). Sometimes the mane and tail is a darker grey than shown here or even self-coloured. Down below is the Morgan Stallion from the 1996 JCPenney set. This guy is always new plastic, has pink hooves, grey shaded legs and candy cane striped mane and tail. 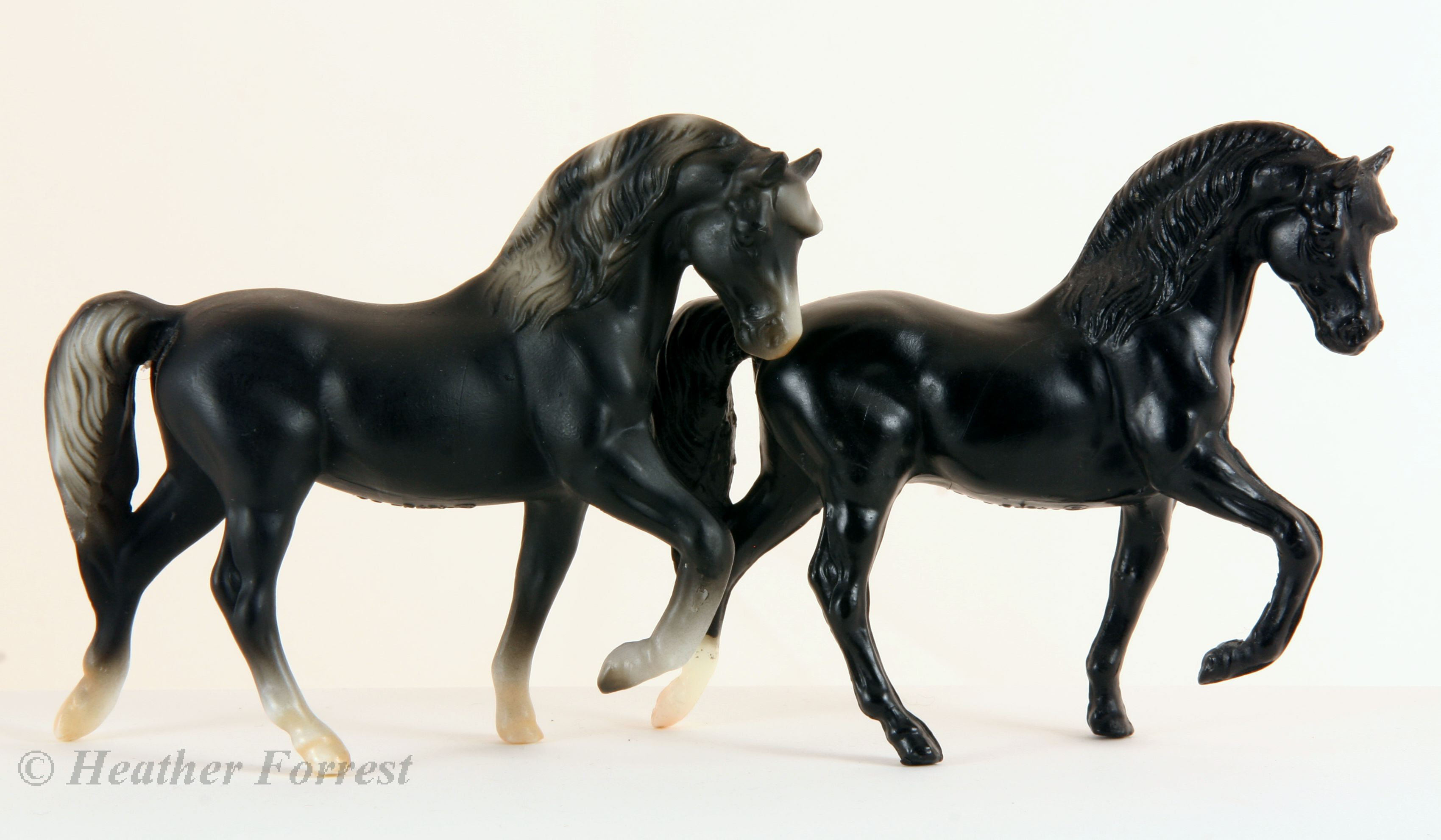 No confusing these two. The 1995 JCPenney stallion in the front has a striped mane and tail, much like the SR above. He is always made with new plastic and should have four socks and a white nose. The model behind him is a #5036. These were always made with old plastic. The number of socks can vary, but the colour is always an inky black compared to the softer black of his SR buddy.