Earlier today we had the Durham Steel Stallions models which are fairly well documented for knock-offs. The origins of the following models are a bit more mysterious.

The owner didn't know anything about these guys, but it doesn't look as if they are from the Durham Steel Stallions line as they are unpainted and are lacking any type of mold stamps.

They do, however look very similar in finish to other Durham miniatures and are, with the possible exception of the G1 Saddlebred, molds which Durham would already have on hand. It stands to reason this G1 Saddlebred Knock-off probably spawned the rumors of the Hagen-Renaker 5-gaiter mentioned in the Durham Steel Stallions post. 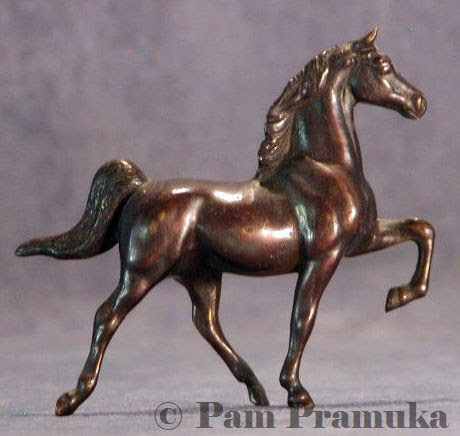 Models and pictures owned by Pam Pramuka and used here by permission.

The Saddlebred is Stablemate-size, but the Morgan and Thoroughbred are almost Micro Mini scale (there is also a Hartland Tinymite Morgan out there), which makes me think they are probably missing something...pencil sharpeners!


The bases of the models would contain a little pencil sharpener. Like the model above, nothing much is known about these guys, but I recall often seeing the Morgan in the gift shops of various tourist traps.

There seem to be no mold markings, but Durham does (or did) produce other miniature pencil sharpeners in a similar style. Even though Durham makes similar items, I don't think these are their product as the molds are less detailed than the Durhams and have some sort of scary eyes. Still, it's odd that the same three models have been used; maybe this company copied Durham's copies?

From pictures I've seen of a broken Morgan sharpener on eBay, these models are attached to the base via pegs which were added to the production tool and then cast as a part of the model.

I couldn't get permission to use the pictures I found, but a search on eBay for 'metal horse pencil sharpener' should yield pictures similar to my finds. The packaging seems to come in a few styles:

These three are fairly common on eBay, though the Hartland Morgan seems to be the more difficult to find, and Sharpenking still sells the Thoroughbred.


In the mid-1990s, a company called Little Jimmy, LTD30 offered a small line called Winner's Circle, LTD, "solid die cast metal horse with collector card and stand" which looked suspiciously like metal G1 Stablemate molds. The copyright gives the date of 1995 along with the address "614 Trenton Avenue, Point Pleasant Beach, NJ 08742"30; interesting that they're based in New Jersey, isn't it? Collectors mention finding these models at stores such as K.B. Toys30 and Toys-R-Us31.

The packaging, which also states they're "MADE IN CHINA" and "PRINTED IN CHINA"30, declares "Each authentic die-cast horse is a hand-decoratedand (sic) highly detailed for collecting, trading and play"30. From the sound of it, these were intended to be more than your average cheapy knock-off.


At first glance, some collectors thought these were new Durham releases31, but they seem to be produced by an unrelated company. Some of the molds have some slight differences from both the Breyer releases and the Durhams. The G1 Seabiscuit has a re-worked mane and tail, and the near-foreleg is extended more. The G1 Thoroughbred Mare has a new little flip on the end of her tail and some slight leg and possibly head repositioning. Like the Thoroughbred Mare, the G1 Morgan Stallion has had a little tail flip added. His mane and forelock have also been reworked a bit and he's gotten a facelift. His off-foreleg has also been raised slightly from the original position.

Each model came with a stage-like plastic stand and a collector's card (some collectors do not recall receiving a card31, so maybe this wasn't a universal accessory). If the Thoroughbred's card was a typical example, I'd love to see what the others had to say:


"THOROUGHBRED The modern Thoroughbred is bred to mature at an early age, and horses are raced at two years old. This practice is wasteful and many youngsters break down under the strains imposed.It continues largely on account of the economics involved."30


That's not your average breed profile for a children's toy is it?


Now I was a bit skeptical of how well the box pictures would translate into real life, but you have to admit, these are some pretty nice looking models, especially for knock-offs. I need some of these guys in my collection!


Our final metal model isn't quite a knock-off, though he looks pretty close. 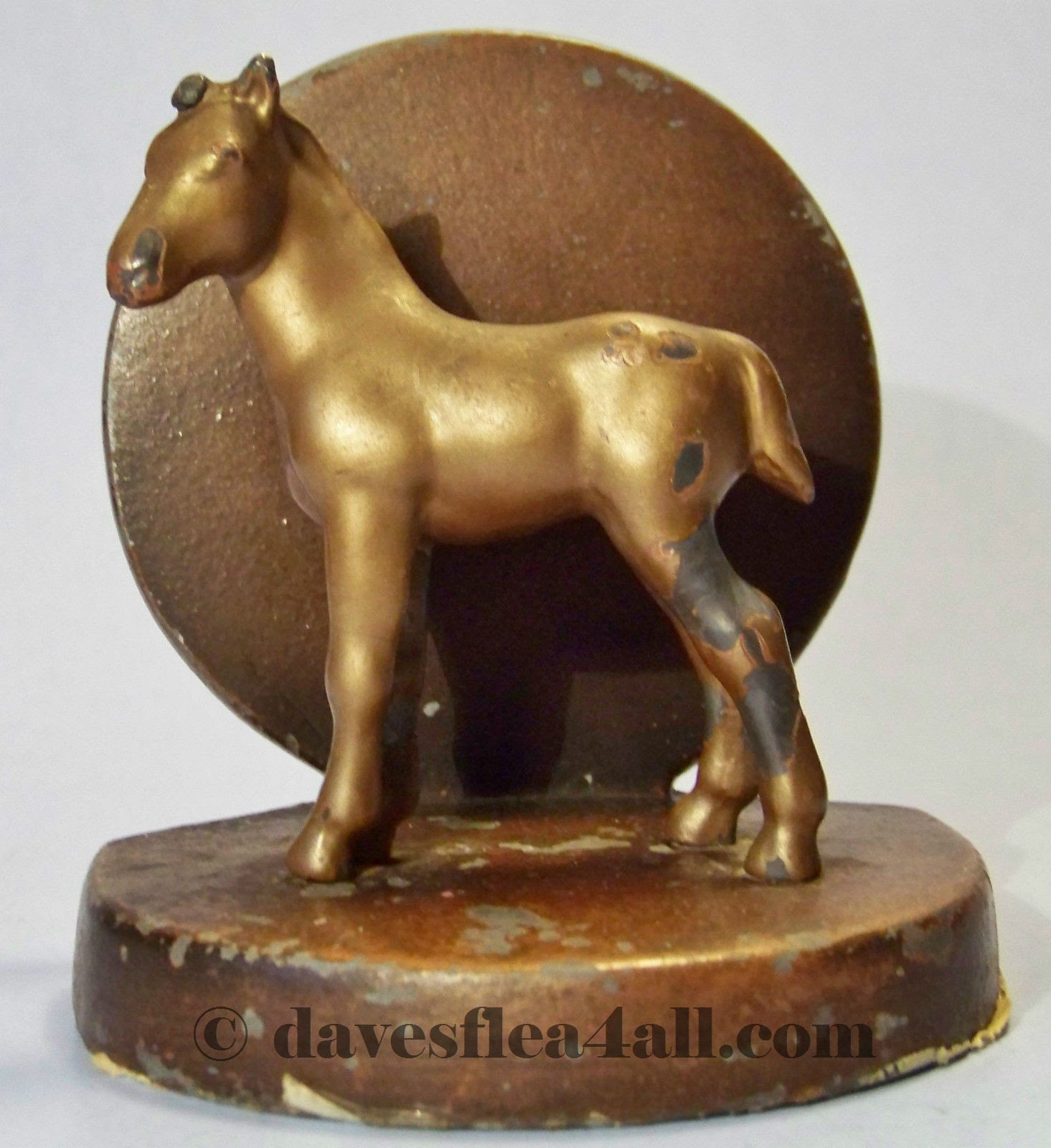 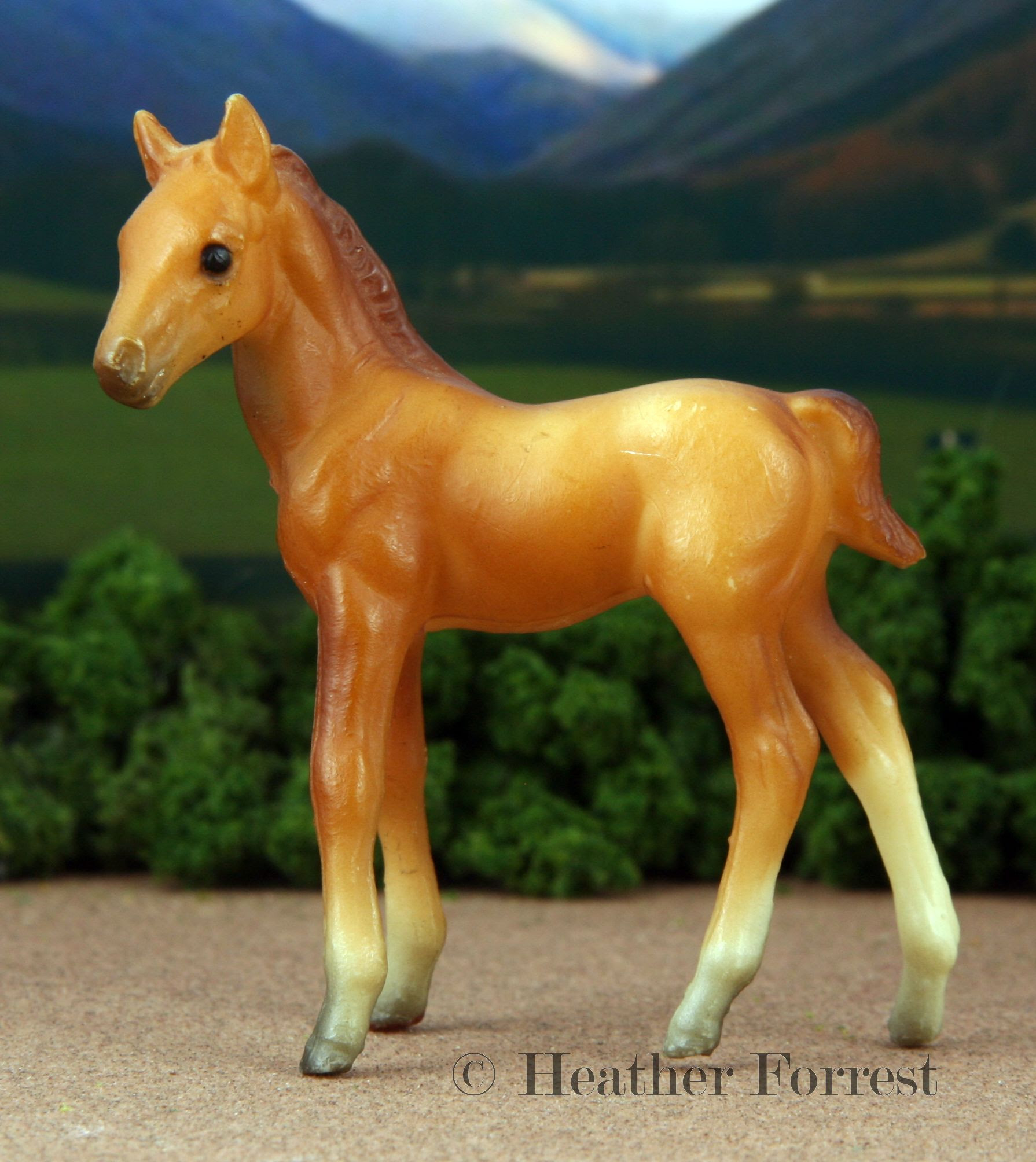 This little guy is a Nuart-style foal; Nuart produced a variety of figures in the 1920s and 30s. Except for a few differences, he looks quite similar to the G1 Stablemate Thoroughbred Standing Foal, doesn't he?

Many thanks to davesflea4all.com, Kim Geelan, Sharon E, Heather H, and Pam Pramuka, for generously contributing pictures from their collections for this post!