The G3 Standing Stock Horse is one of the more heavily used G3 molds and has a rainbow of look-alikes to its name. 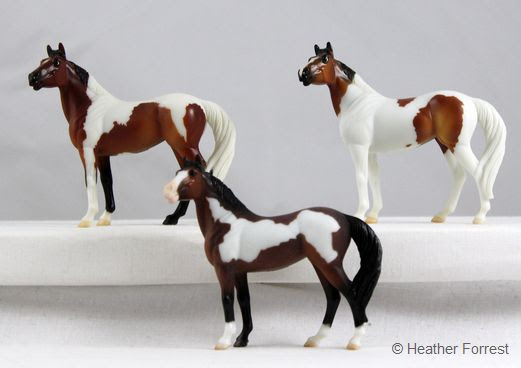 #5906 Paint Horse - Bay Pinto (2006-08) is a well traveled model and can be found in the Rural King #701850 Stablemates Country Stable Barn (2010) as well as the Various Retailers Horse-A-Day Calendar (2011-2012). The model is a red bay tobiano with the "map and cape" pattern draped over its back. The pattern irritates purists because, except in very rare cases, tobiano horses have white on all four legs. These models have a near-fore stocking, an off-fore pastern, and nothing on the back legs. The mane is two-toned black/white and the tail is white. A small star and eye-whites finish things off.

BreyerFest Breyer Store Special #711080 Stablemates 20th Anniversary Commemorative Set - 2000 Leah's Fancy Chick (2009) is a lighter bay with lovely shading and a "head and haunches" tobiano pattern. All four legs are white, as is the tail, the mane is two-toned black/white, and she has a blaze ending in a snip, and eye-whites.

#5941 Mystery Foal Surprise Gift Set (2012-13), too, is a bay pinto, but this time the pattern is frame overo, with large patches on both sides, a large blaze, and three socks, not including off-fore. The model should have a spritz of roaning over the bay colour, but it can be nearly invisible on some, and un-roaned models are certainly possible. 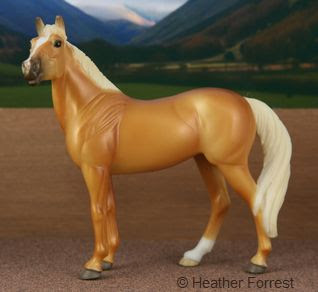 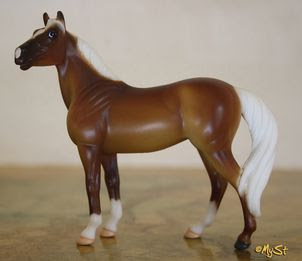 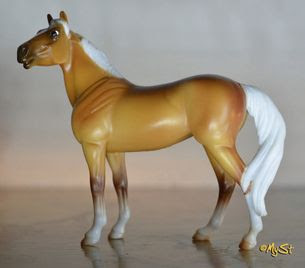 #59202 Stablemates Riding Academy (2007-Current) is a caramel-coloured palomino with bright white mane/tail, three socks, not near-hind, a star and snip, and eye-whites. 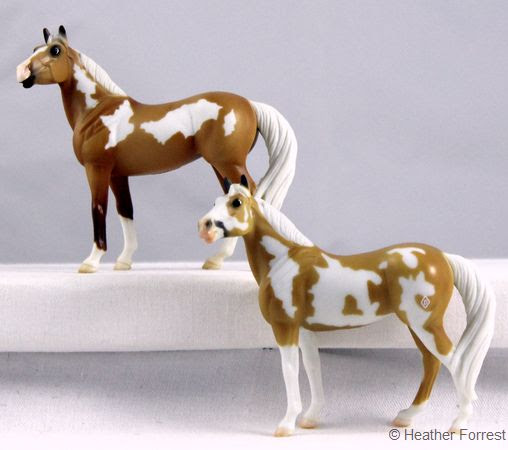 BreyerFest Breyer Store Special #711080 Stablemates 20th Anniversary Commemorative Set - 1995 Mego (2009) is a yellow palomino tovero with a patch pattern, three stockings with a white pastern on the off-hind leg, apron face with black spotting on the muzzle, white mane/tail, eye-whites, and a diamond-D brand on the near haunch. 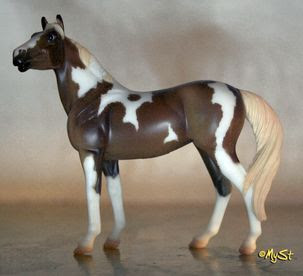 #46003 Fun in the Sun 500 Piece Puzzle (2008-09) could be considered a sooty palomino, but most people just call it a flaxen liver chestnut. It has an intricate tobiano pattern with four stockings, blaze, eye-whites, and cream mane/tail. 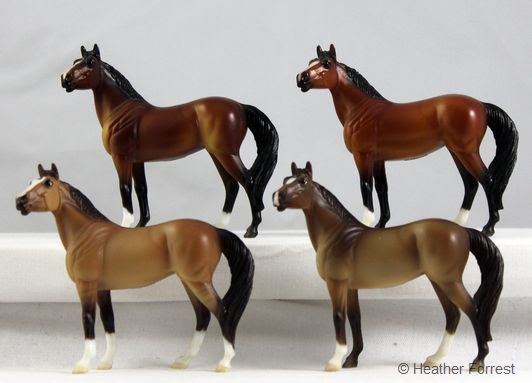 #5405 Horspital Play Set (2008-09) is a slightly metallic red-toned bay with near-fore and off-hind socks, and a blaze which widens towards the top. 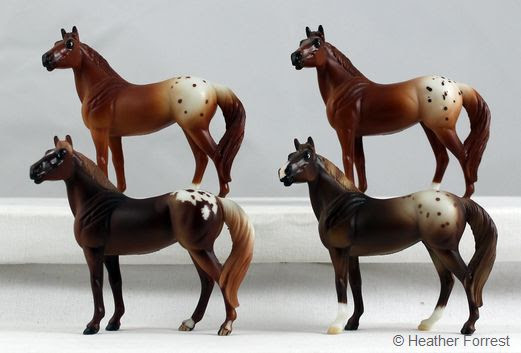 Target #720220 Pony Gals - Appaloosa (2009) is an orange chestnut appaloosa. The small blanket is airbrushed with polka-dot spots which match the base colour, near-fore and off-hind socks, and eye-whites.

Toys 'R' Us #760218 Stablemate World of Horses Shadow Box - Appaloosa (2010) is an orange chestnut appaloosa. The small blanket is airbrushed with polka-dot spots which are darker the base colour, near-fore and off-hind socks, and eye-whites. The base colour is slightly darker and has more of a shine than the Target SR.

BreyerFest Breyer Store Special All American Tribute - Colorado Rangerbred (2007) is a flaxen liver chestnut appaloosa with a stenciled hip blanket with stenciled spots. It has white hind pasterns with striped hooves, a star, and eye-whites. 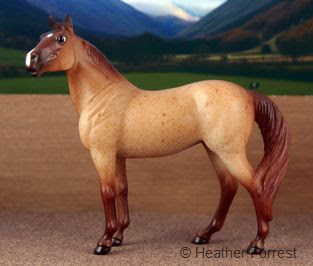 Stablemate Assortment #5907 Quarter Horse (2009-11) is a chestnut roan with a creamy base coat, chestnut roaning, shaded legs and matching mane/tail. It has a star, snip, and eye-whites.

Walmart #97245 Horse Crazy Surprise (2017-current) is thought to be a re-release of #5907, but I have not seen pictures yet to determine if there are any differences in colour.