The G2 Thoroughbred comes in a rainbow of colours, and with so many releases, a wide variety of Look-Alikes are to be expected. Like usual, we'll move from left to right, top to bottom when discussing the models in each picture.

Not black, but a very dark bay, #720256 Dreamer Stablemates Race Horse Set - Goliath's Boy (2005-06) the body has rich plum undertones and no white markings. They hooves tend to be a lighter colour than the body, but over-spray could darken them, and the eyes have eye-whites. These models are frequently damaged from the tack they wore while packaged.

#10103 Seabiscuit Stablemates Three Piece Gift Set - War Admiral (2003-2004) is more noticeably bay as he is a touch lighter than Goliath's Boy. This red-toned dark bay has no markings, black hooves, and a touch of red shading in his nostrils.

The short lived G2 Thoroughbred from the Target SR #720599 Horse and Foal Set (2006) is lighter than the previous models, but still a very dark bay with gold undertones. She has an off-hind sock, near hind stocking, and an apron face. All four hooves are black.

The BreyerFest Breyer Store Special #711403 Porcelain Seabiscuit (2003) is, as one would expect, porcelain and has a glossy finish. It is a clear, medium bay with no markings, and is attached to a grass and stone base.

The closest to a clear, true bay, is #9178 American Pharaoh (2016-current). This model has eye-whites and a hand painted, rather than stenciled star.

The only glossy plastic bay is the QVC Silver Cup Series, Second Collection (2002). The colour could be called a sandy bay or buckskin and has a rather peachy undertone. The model has a large blaze extending over the muzzle and socks on the near-side legs.

Like the QVC SR, the #9116 The Eight Disciplines of the World Equestrian Games - Eventing (2010) could be a sandy bay or a buckskin. It has a matte to satin finish, sooty shading, star, snip, eye-whites, and socks on the near-hind and off-fore legs. 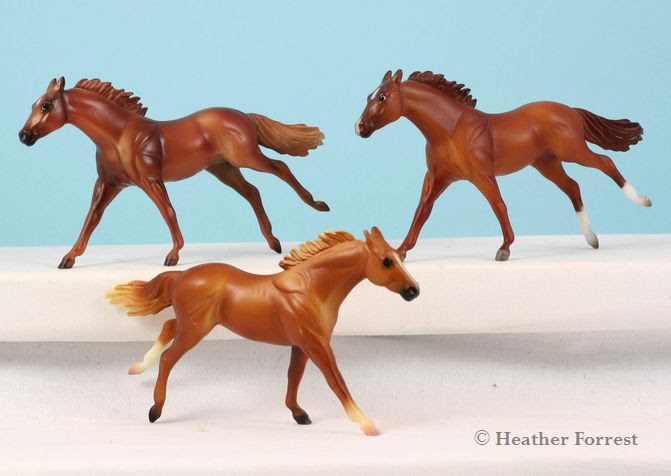 The most heavily shaded chestnut is the #720256 Dreamer Stablemates Race Horse Set - Sonador (2005-06). This model generally has a satin finish to semi-gloss finish. It has a star, eye-whites, and flaxen shading in the mane and tail, and glossy brown-toned hooves. The models frequently sustain damage from being packaged in tack.

#5500 Saddle Club 4 Piece Set - Prancer (2008-11) is more lightly shaded with a matte to satin finish. The mane and tail are darker than the body and the hooves are a matte grey. The model has a star, snip, eye-whites, and hind socks.

#5602 Thoroughbred (1998-02), also assortment #5901/#5902, is a yellow-toned chestnut with flaxen highlights in the mane and tail, near-hind stocking, off-fore sock, and a blaze. The hooves on the coloured legs are a greyish brown, and shell-coloured on the white legs.

Toys 'R' Us #740701 TRU Reflections (2001) is the one with the hardware in its back, though some people like to remove this for display purposes. It is also currently the darkest grey and the only one with dapples. The dapples are the misty water-dapple style and the mane and tail are darker than the body. The model has a thin blaze and a near-hind stocking.

Just About Horses #790798 Special Edition Stablemates Gift Set (1998) and the G2 Thoroughbred from the BreyerFest Breyer Store Special Mystery Box (2004) are one and the same. The model is old plastic and is a shaded light grey on a base-coat of white paint which gives the colour a rather thick look.  It has dark shading on the face, four vague socks and a narrow blaze with a touch of pink in the snip.

Walmart #750010 Flicka in the Wild Stablemates Set (2006) is a shaded grey very similar in shade to the JAH SR. The shading in the mane and tail is darker and it has a lighter face. There are no markings, but it does have eye-whites.

The only flea-bitten grey thus far is the JCPenney #410175 Stablemates Parade of Breeds - Thoroughbred, Fleabitten Grey (2005. The body has a slightly peachy tone due to the tiny chestnut flea-bites. The mane and tail are stark white, the face and joints are softly shaded. It has thin blaze and four socks. The hooves on the near-fore and off hind legs are grey; they're cream coloured on the off-fore and near-hind legs.

Target #720223 Pony Gals - Thoroughbred (2009) is a delicately shaded white grey with no markings, just a touch of darker shading on the face, ears, and leg joints. The hooves are a very light grey. 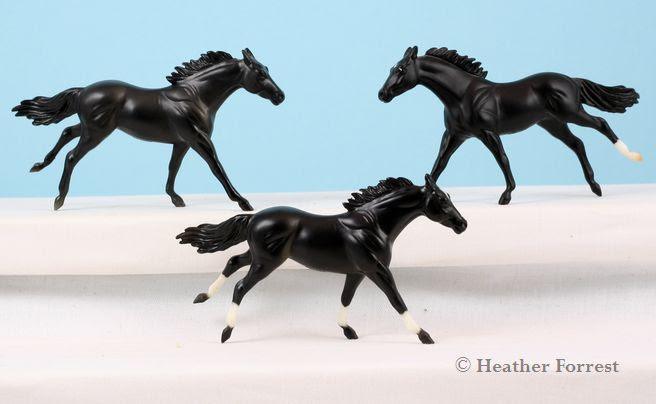 #10303 Hidalgo Stablemates Arabian Adventure Play Set (2004) is a smokey black with a touch of shading, mostly noticeable only on the shoulders. It is completely without markings and has black hooves.

BreyerFest Breyer Store Special #711080 Stablemates 20th Anniversary Commemorative Set - 2009 Whizards Baby Doll (2009) is a soft black that gives the impression somehow of being shaded. She has a near-hind sock, star, and eye-whites.

The leg marking on the #5207 Jockey Rider and Race Tack Set (2005-06) model are a bit odd for socks - I think the painters might have been trying to give the impression of leg wraps. Anyhow, this model has a star, snip, four "socks", and black hooves.

Not black, but a very dark bay, #5401 Flicka and Family Gift Set (2006-07) is a tobiano with four stockings, cream hooves, blaze, eye-whites, and sometimes a touch of red shading in the nostrils. The mane and tail are two-toned, black and white.

JCPenney #410174 Stablemates Parade of Breeds - Pinto Sporthorse, Black and White Pinto (2004), as the name would lead one to expect, is a black tobiano with a larger pattern than the Flicka model. It has a blaze, four stockings, and cream-coloured hooves. The mane is solid white while the tail is solid black.

The spectacular bay frame overo from the Target #720599 Horse and Foal Set (2006) was only available for a month or so. The intricate, lacy pattern is almost as appealing to collectors as its rarity. The body colour is a richly shaded dark bay, and the pattern extends from shoulder to hip on both sides. The face has an apron blaze and a patch on the off-side cheek. The forelegs are solid, except for a patch on the near-side knee. The near hind leg has a clear stocking while the off hind leg has a small sock with a larger leg patch above. The hooves on all four legs are black.

The chestnut pinto models represent a range of white patterns.

#5203 English Rider and Saddle Set (2000-04) is the tobiano with four white legs, blaze, and two-toned chestnut/white mane and tail.

The #5904 Chestnut Paint (2003-06) also appears as Target SR #720116 Thoroughbred - chestnut pinto (2006) and in the Tractor Supply Company Play Set #301119 Horse Adventures (2009). It is a darker chestnut with flaxen shading in the mane and tail. The white pattern on this one is likely one of the sabino or White mutations that is popping up so frequently now in the Thoroughbred breed. It has a blaze, hind stockings, and patches of white on the off-fore leg. Translucent plastic models are not uncommon.

Blockbuster #10304 Hidalgo Stablemates Mustang Play Set - Hidalgo (2004) is the frame overo, probably with a touch of White or sabino, too. This was an incredibly ambitious pattern for this scale as the pattern is very detailed with lacy edges. The model has an apron face, dark spots on the lips, three stockings, with a pastern on the near-hind leg, cream-coloured hooves, and eye-whites. Translucent plastic models are not uncommon. 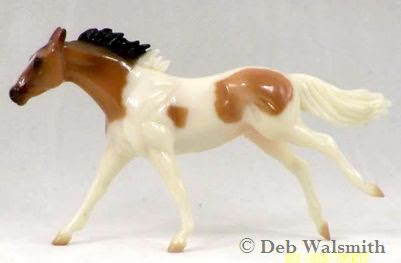 The only glossy pinto so far is the German Show Special Stablemate Set (2006). This model is a buckskin or sandy bay with four white legs and a blaze. The head and neck are coloured, and there are coloured patches on the hips, and one behind the girth on the near-side. The mane is two-toned black/white, the tail is solid white, and the hooves are cream-coloured. 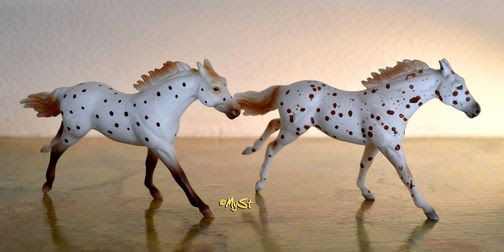 #59975 Appaloosa Mare and Foal (2000-02) is a chestnut leopard appaloosa with flaxen shading in the mane and tail, light chestnut shading on the leg joints, grey hooves, and grey shading on the muzzle. The body is either painted white or is the stark white plastic. I haven't scratched mine to find out. The spots are very polka-dotty with a mist of smaller spots in between.

#5393 Leopard Appaloosa Horse & Bay Semi-Appaloosa Foal (2016-current) looks as if the body may have a white base-coat of paint instead of bare plastic. It, too is a chestnut leopard appaloosa with flaxen shading in the mane and tail, though the shading looks darker. The legs on this model are solid chestnut with a near-hind sock and cream coloured hooves. The muzzle is shaded chestnut like the legs. The spots are polka-dots and are more sparse and regular than the 2000 mare.

Many thanks to Deb Walsmith and MySt of My Stablematesfor providing pictures for this post!