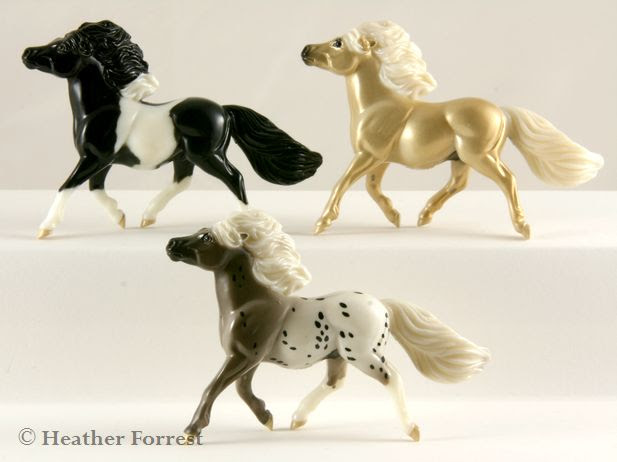 Lazy Days Midnight Lightning is the black tobiano with a "cape" style pattern which extends over the back of the shoulders; the barrel, chest, neck, and haunches are left black. The four socks are disconnected from the rest of the pattern and the models have pinkish eye-whites.

Legally Blonde is a rich and creamy palomino with a metallic finish, unpainted white mane and tail, painted chestnuts, shaded muzzle, a small star, and pinkish eye-whites. I have a vague memory that this colour is actually supposed to be golden champagne, but I have yet to find a source to confirm this.

Santee Dottaloosa is a grey blanket appaloosa - this type with spots which extend up the shoulders and neck are often called semi-leopard appaloosas in the hobby - with stenciled hind-stockings, pinkish eye-whites, stripes on the off-fore hoof, and pinkish eye-whites. As with Legally Blonde, I have a memory of this colour representing something different than it appears. Though I cannot find a source to confirm it, I recall the real Santee Dottaloosa being a silver black pintaloosa. 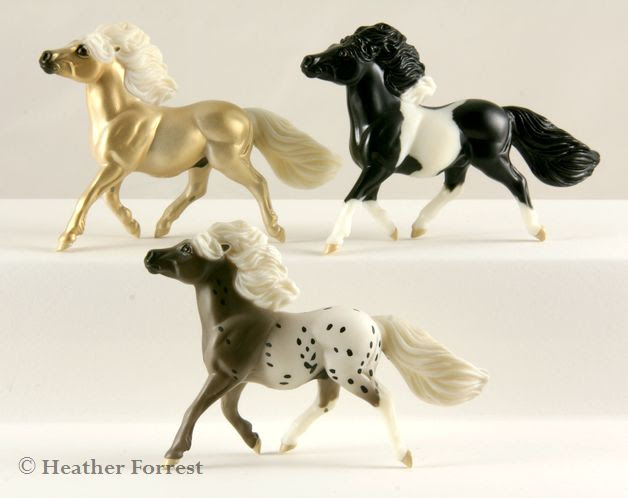 Breyer has a history of using glossy models as the rare or prize models, but this time they're the common version of a set and the matte the more rare. Around 200 of the Wee Trio sets were produced in matte finish and given away to the judges and other staff who helped at the 2004 Jamboree.

The colours were the same, but the models were matte to satin in finish. It can be a bit difficult to tell the matte sets from the glossy. Santee Dottaloosa is the easiest as the finish is usually very matte and the grey colour gains depth from the gloss.

The metallic finish on Legally Blonde can make things tricky, but close examination of the mane and tail can determine a matte or glossy finish.

The hardest is Lazy Days Midnight Lightning - the black markings tend to have a bit of a satin shine on the matte models; look closely at the white areas as these will differ more from the glossy models.