We have a ton of G2 Stock Horse Look-Alikes today, so let's just dive right in.

There's a fair range of bay, brown, and black models. One of the models, #5410 Tractor Play Set (2010-13) on the top-left, is actually a bay dun. It has a dorsal stripe, shoulder barring, and faint leg stripes. the colour is the lightest of the brown models being a shaded tan and the points are dark chocolate to black. It has a diamond-shaped star, near-hind and off-fore socks, and eye-whites.

#5401 Flicka and Family Gift Set (2006-07) on the top-middle, is a red bay generally with a satin finish with slightly metallic tones. It has no leg markings, but has a diamond-shaped star and eye-whites.

On the top-right is the newest of the brown models, the #5374 Cutting Horse (2014-15). This model is a dark bay with soft golden, slightly metallic highlights, four airbrushed socks, and a blaze. It can be difficult to find this model in good condition due to the fragility of the metallic paint and the fact that it came packaged in rubber tack which tended to remove or otherwise damage the paint.

#720221 Pony Gals - Quarter Horse (2009), also released as #701720 Stablemates Visiting Vet Horse and Trailer (2012-14) is on the bottom-left. It is a very dark brown (also called seal bay) with stenciled off-side pasterns and no other markings. The finish is usually satin to semi-gloss.

The last bay G2 Stock Horse is the#5361 Western Trail Play Set (2009-10) on the bottom-middle. It appears black, but is actually a very dark bay with near-fore and off-hind socks, star, snip, and eye-whites. It, too, can suffer damage due to being packed in tack, but the semi-gloss to satin finish serves to protect it somewhat. Some models are slightly lighter and more of a dark chocolate colour than brown-shaded black.

Finally, on the bottom-right, is the #5407 Stablemates Dude Ranch Play Set (2008-09). This is the only solid black G2 Stock Horse thus far. It has three socks, not off-hind, a large blaze, and eye-whites. 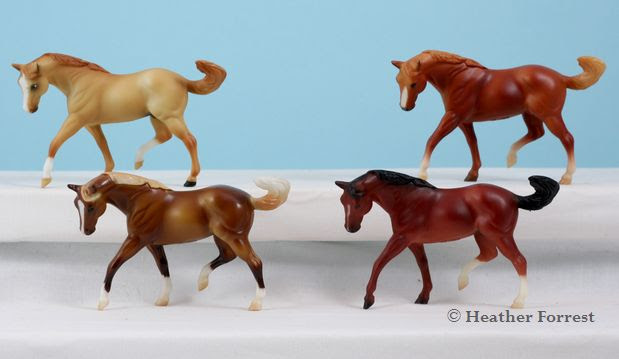 The chestnut models come in a slightly wider range of shades.

On the top-right is the only chestnut model not to have been reissued. #5981 Stablemates Horses Gift Pack (2002-06) is a bright red chestnut with shaded flaxen mane and tail, three airbrushed socks, not off-fore, and a large snip.

The model on the bottom left first appeared in the JCPenney #410431 Truck and Trailer (2007) set and was then later released in the #5412 Stablemates Horse Lover's Collection Shadow Box - Stock Horse (2011-Current) set. This model is a caramel coloured flaxen chestnut with darker shading on the knees and hocks, four socks, and a blaze. The finish is generally satin to semi-gloss. 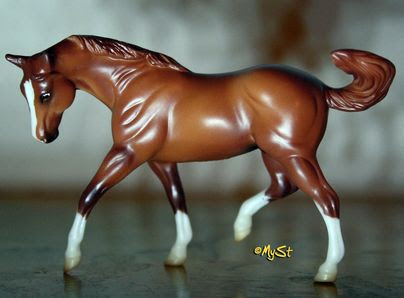 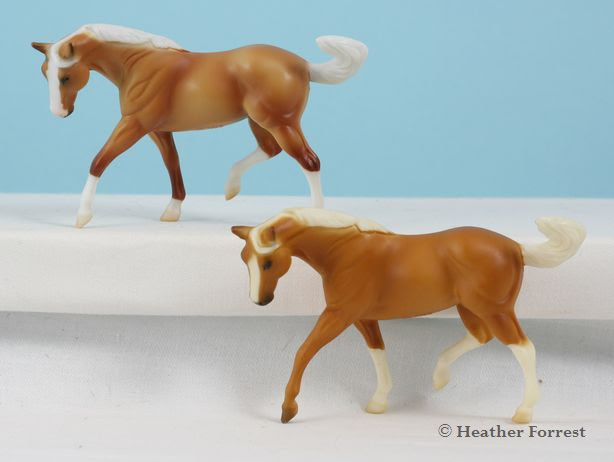 #10317 Graceland Stables Play Set - Rising Sun (2010-12) on the top is a softly shaded palomino with darker shading on the legs, three stockings, and an off-fore pastern, and a large blaze.

There is another palomino G2 Stock Horse, the model from the #5933 Country Wagon (2012-14). This model is a very pale cream palomino, with four socks and possibly a blaze. 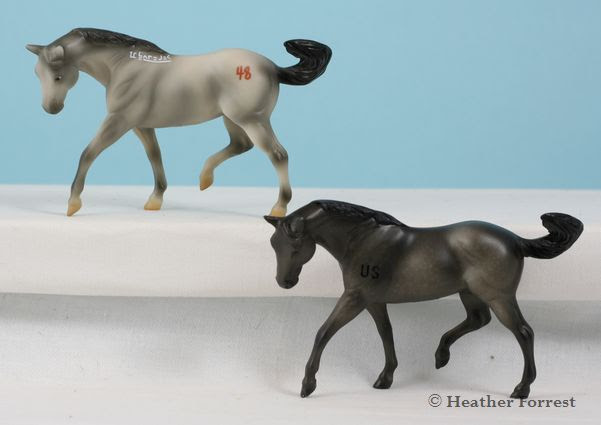 The grey models are pretty obvious. On the top is the softly shaded #711080 Stablemates 20th Anniversary Commemorative Set - 1991 Mustang Lady (2009). She has eyes-whites, a white freeze brand on her near-side neck and a red 48 on both hips.

#5311 Spirit: Stallion of the Cimarron Play Set (2006-07) on the bottom replace the G1 Native Dancer around the end of 2005/early 2006 and is a dark dappled grey with no markings besides a black US brand on the near shoulder. 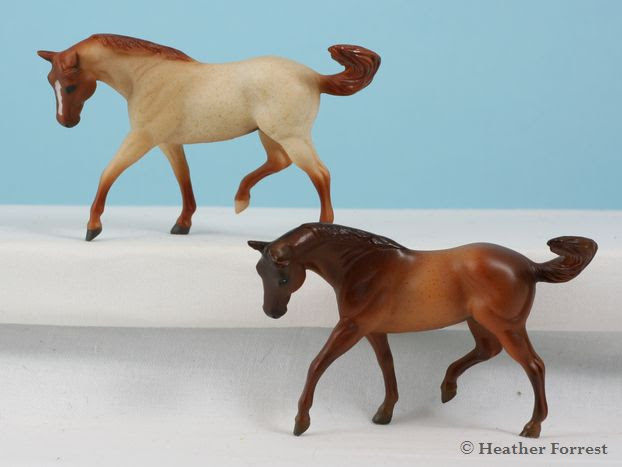 Like the grey models, the roans are a cinch to tell apart. On the top is the JCPenney special run #410175 Stablemates Parade of Breeds - Quarter Horse, Red Roan (2005). This model has a pale pinky-cream body with small chestnut speckles, darker red points, blaze, and dark fore-hooves except for the off-hind which is a light shell colour.

On the bottom is the Walmart special run #750010 Flicka in the Wild Stablemates Set (2006). This model is a darkly shaded chestnut with a lighter band of shading over the barrel, chestnut speckles, and no other markings. 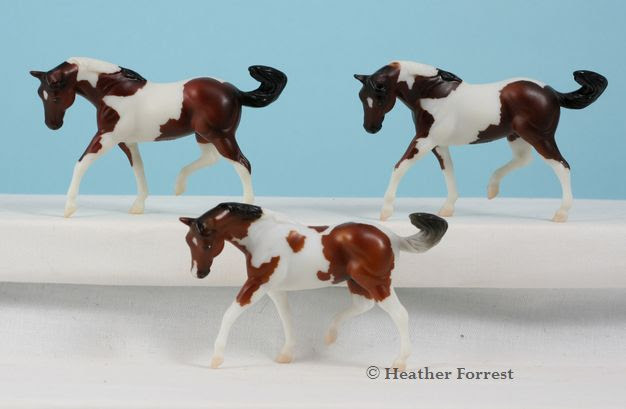 The top two models are re-releases. On the left is #5500 Saddle Club 4 Piece Set - Patch (2008-11) and on the right is the Toys 'R' Us special run #760218 Stablemate World of Horses Shadow Box - American Paint Horse (2010). My regular run is a slightly lighter and more red bay than the special run, and there are slight changes in the pattern and markings, but this is more than likely due to simple painting variations. Both models are red bay tobianos with a star and four white legs. The finish is generally satin to semi-gloss.

On the bottom is the special run #711080 Stablemates 20th Anniversary Commemorative Set - 2007 Rugged Painted Lark (2009). This model is a slightly lighter bay than the two above with a star, snip, four white legs, eye-whites, and and overall more detailed pattern. 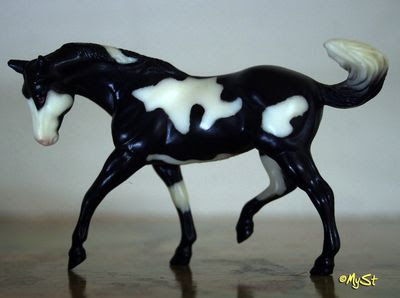 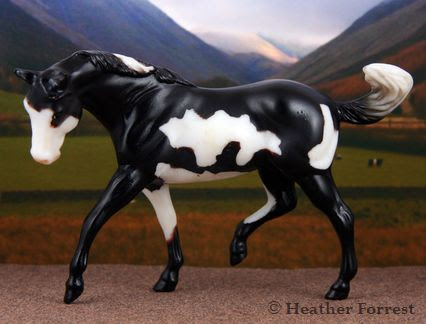 #59198 from the Western Ranch is a black frame overo while #5315 from the Annie Oakley set is actually a very, very dark bay with eye-whites. As you can see from the pictures, there are subtle differences in the size, shape, and placement of the markings which remain consistent through a range of models. 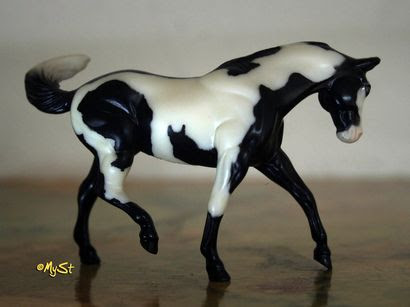 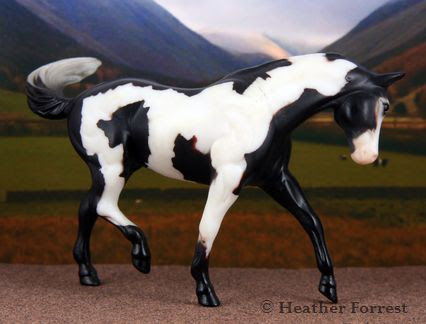 The difference in pattern and colour is even more obvious when you see the off-sides. The bay colour of the Annie model is most apparent around the edges of the markings and the markings themselves are less smooth than the Ranch model. 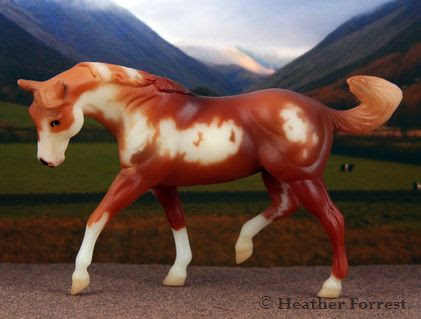 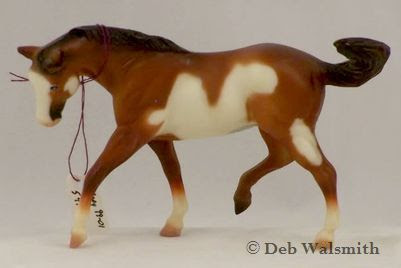 They may both be listed as chestnut overos, but once you see them together, they're nothing alike.

On the left, Hidalgo from the #10306 Hidalgo Stablemates Buffalo Bill Show Play Set (2004-05) is a flaxen chestnut frame overo with a rather unique blaze, black spots on the muzzle, eye-whites, and an assortment of leg markings on all four legs. This model can also be found in translucent (like mine) and regular plastic.

The model from the #59197 Stablemates Little Red Stable Set (1999-2001) on the other hand looks like more of a splash overo with the smooth belly spot and apron face. It has only three socks (not off-hind) and features a blue near-side eye.

There's a range of brown blanket appaloosas on this mold. Moving from left to right, smallest to largest blankets we have:

The model in the #79197 Country Stable Set (2006) also has lacy hip blankets, but they're larger than those on Quarterflash. The base colour for this model is a softly shaded chestnut and for markings it has a large star, near-hind and off-fore socks, and eye-whites.

#711080 Stablemates 20th Anniversary Commemorative Set - 1994 Bright Zip (2009) is a chestnut with a large, rather roany blanket with spots extending past the borders, resist-dapple roaning over the body, blaze, eye-whites, and a white Y brand on the near shoulder. 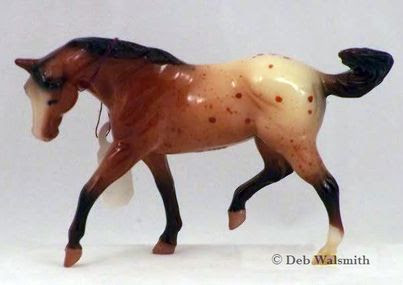 The only glossy blanket appaloosa is from the QVC special run Silver Cup Series, First Collection (2002). This bay model looks a bit like Bright Zip in that it too has a roaned blanket with scattered spots, resist-dapple roaning over the body. It has a large blaze and a near-hind sock. 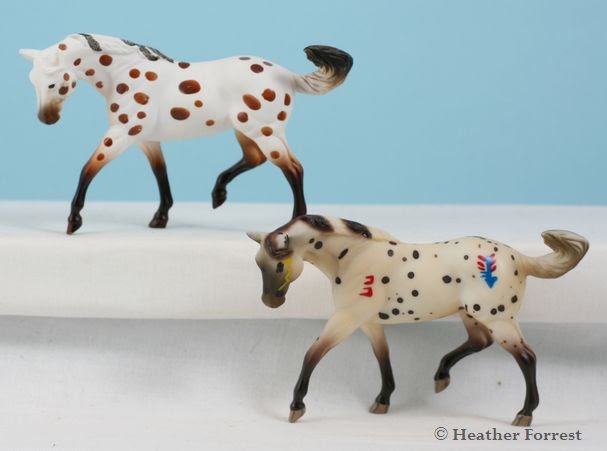 There are only two brown leopard appaloosa G2 Stock Horses so far. On the top is the model from the #5308 Dude Ranch Play Set (2001-05). It is a red bay with large spots, chocolate to black legs and hooves, dark shading on the muzzle, dark tipped tail, white forelock, and several black stripes in the mane. The body is very white.

#5208 Indian Brave and Appaloosa (2005-06) is a more off-white colour with smaller chestnut spots, darker legs and face, grey hooves, shaded tail, dark forelock, two mane stripes, and on the near-side a yellow zig-zag on the face, red horseshoes on the shoulder, and a blue arrow with red feathers on the hip.

Many thanks to MySt of My Stablemates and Deb Walsmith for providing pictures for this post!