With the introduction of a new generation of Stablemates, Breyer saw fit to invest in further diversification of the line. A pair of riders, very similar to those produced by Britains, made an appearance in English and Western wear. Each style came with an appropriate saddle and bridle and was paired with a horse. The tack and riders were all made of rubber and were quite detailed for the scale.

The first batch of horse and rider sets appeared in 2000 and were available through 2004. There were two Western and two English sets. The two Western Rider and Saddle Sets consisted of #5201, a palomino G2 Stock Horse and #5202, a bay G2 American Saddlebred. Both models went on to be re-released in several later play sets. 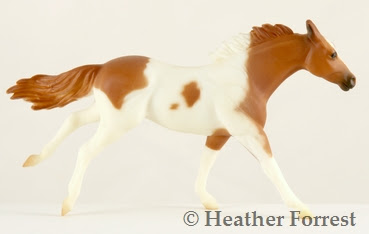 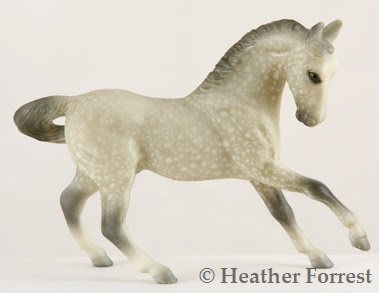 The models in the English Rider and Saddle Sets were a bit more flashy than the Western sets. #5203 is a chestnut tobiano on the G2 Thoroughbred mold and #5204 is the G2 warmblood in dapple grey. These two were only used in these sets. 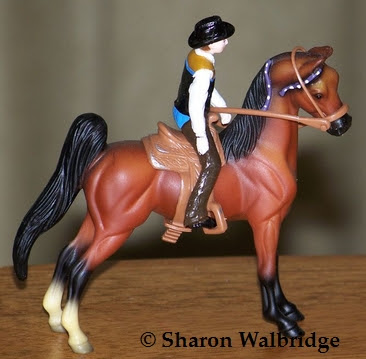 The rubber tack can be a bit fiddly and the riders aren't quite to scale with the horses, but the effect is charming when everything is put together properly. The sets came packaged on a hanging card like the Singles Assortment models, but several changes in the packaging occurred during the run. The earlier models came on a rosette-shaped care fully assembled with tack, rider, and horse all together. Later sets went for a more deconstructed presentation on a plain rectangular card; a trophy, ribbon, and paper fence were added at this time, too. The change likely made the sets easier to assemble and the plainer cards were less likely to be damaged than the more ornate ribbon-shaped cards.

I don't know the exactly when the change was made, but I'm guessing it was some time in late 2003 or 2004 as the 2003 special run was released on the fancy ribbon cards and the new 2005 sets came on plain rectangle cards. Speaking of the 2003 special run, instead of the usual Traditional or Classic model, the last Breyer Day Show Special release was a pair of Stablemates. Sold individually on a rosette card, #702003 Western Rider and Saddle set with Appaloosa - the G2 Stock Horse in buckskin appaloosa and #701003 English Rider and Saddle Set with Bay Warmblood 2003 - G2 Warmblood in bay - were simply re-releases of the Singles Assortment models, #5601 and #5607 respectively, with tack and a rider. These sets didn't attract much attention besides disappointment in the lack of the usual special model and are consequently rather difficult to find.


In 2005 a new batch of horse and rider sets replaced the old. These were more ambitious than the simple English and Western sets previously released. While the earlier sets originally only consisted of horse, rider, and tack, the new sets added a length of card-stock fencing and a few extra accessories - trophies and rosette in most cases. Two new themes were added too, racing and American Indian, complete with appropriate tack and riders. 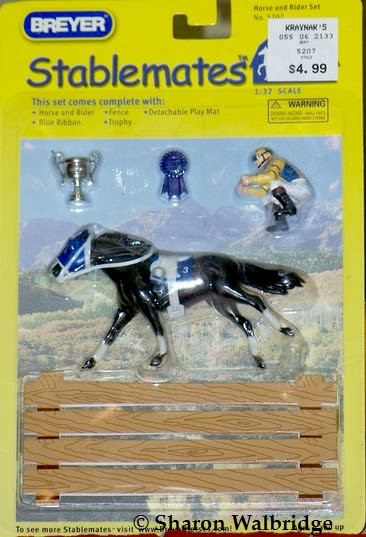 Least successful, design-wise was the G2 Thoroughbred in the #5207 Jockey Rider and Race Tack Set (2005-06), many collectors were turned off by the white socks paired with the black hooves. These white markings were actually supposed to be leg wraps, but the design didn't translate well. This set came with completely new race tack and jockey. #5208 Indian Brave and Appaloosa (2005-06) set was the only one to contain a fabric accessory, a colourful Indian blanket. The bridle was the same as those used in the earlier sets, but the rider was new. This was the only time the G2 Stock Horse appeared in war paint, but it was not his last time to be given painted markings. There was nothing new accessory-wise in the #5209 Cowgirl and Western Saddle Set (2005-06), but the palomino G2 Paso Fino was still a lovely prize. The colour on this model tends to be a bit "roany", much like some of the early 1970s Stablemates. 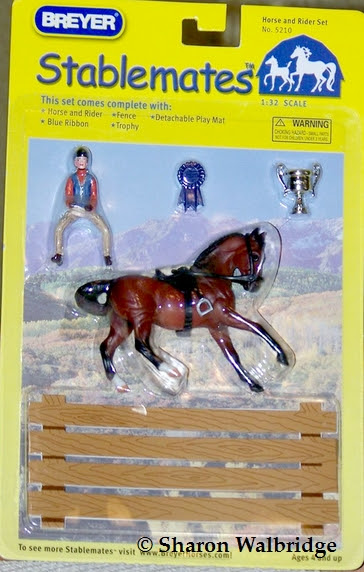 Things got a bit complicated with the #5210 Junior Rider and English Saddle Set. At first the set contained a lovely red bay G1 Quarter Horse Stallion, but in the big switch at the end of 2005, a G2 Warmblood in the same colour replaced it only to be discontinued at the end of 2006 with the rest of this group of models. The tack and rider are the standard English set.

Many thanks to Sharon Walbridge and Seranata for providing pictures for this post!

Email ThisBlogThis!Share to TwitterShare to FacebookShare to Pinterest
Labels: Horse and Riders