Gift Sets: Mares and Foals - New Foals on the Block 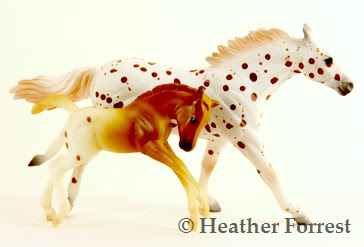 The pairs in the sets weren't too matchy matchy; the adults made believable parents to the foals, but each model had its own individual look. Although both models in the #59975 Appaloosa Mare and Foal set were chestnut appaloosas, the mare was a flaxen chestnut leopard appaloosa while the foal was a more orange-toned blanket appaloosa. 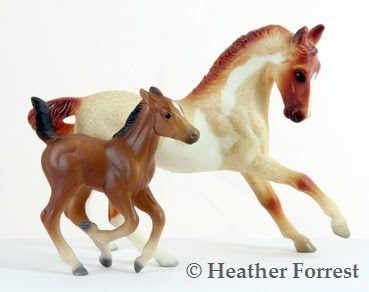 Oddly enough one of the two solid foals was paired with the pinto stallion in the #59976 Warmblood Stallion and Foal set. The G2 Warmblood stallion is a flashy chestnut roan frame while the foal is a much more subdued, though sweetly soft, solid baby bay. 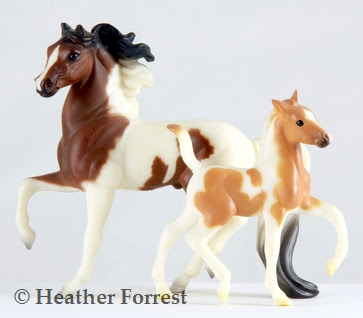 Both models in the #59977 Pinto Stallion and Foal are colourful tobianos. The G2 Trotting foal is a light chesnut tobiano with a complex pattern for the size. The bay tobiano G2 Prancing Morgan had a more simple pattern, but with more detailed, ruffly edges to the markings. 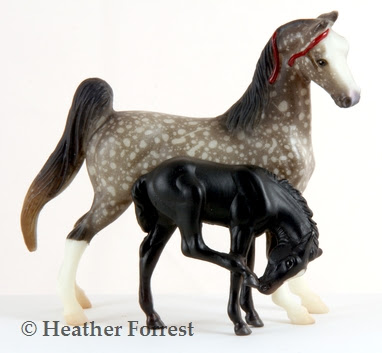 Compared to the other sets, the #59978 Saddlebred Mare and Foal models are a little subdued. The G2 American Saddlebred is a nice medium dapple grey with bubble dapples, four stenciled high-white stockings, an airbrushed bald face, and solid cranberry ribbons. Black can be such a plain colour, but the G2 Scratching Foal is saved from this with a perky star and some soft brown shading around the muzzle.


The 2000 collection of Horse and Foal sets were available through 2002 when they were replaced in 2003 by four new sets; these were bit lighter on the patterned models than the previous sets. 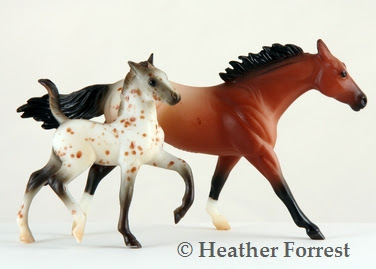 The patterns on the models in the #59979 Horse and Foal Gift Set - Bay Blanket Appaloosa Mare and Leopard Appaloosa Foal set were switched from those in the 2000 set. This time the mare had the blanket pattern while the foal was the leopard. The G2 Thoroughbred is a bright bay with a small, airbrushed blanket. The G2 Trotting Foal in the set tends to vary, a lot. The example shown is fairly typical, being a varnish bay colour with grey shaded points instead of black. Other models can be much darker or lighter and some have chestnut shading instead of the grey. The airbrushed hind socks are more often present than not. 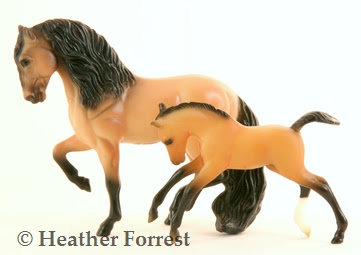 A mini-me pair in the Horse and Foal genre was inevitable. The models in the #59980 Horse and Foal Gift Set - Buckskin Lusitano Stallion and Foal are both a bright yellow buckskin with inky black points. The G2 Andalusian is completely solid and has a creamier colour while the foal is more yellow and has an off-hind sock. 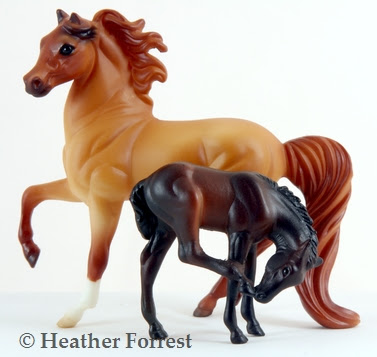 #59982 Horse and Foal Gift Set - Red Dun Morgan Stallion and Dark Bay Foal was a little more interesting than the Lusitano set. The G2 Prancing Morgan colour, a shaded chestnut dun, is complimented by the much darker foal,  a G2 Scratching Foal in a very dark, shaded bay. Both models are completely solid, except for the short near-fore sock on the stallion. 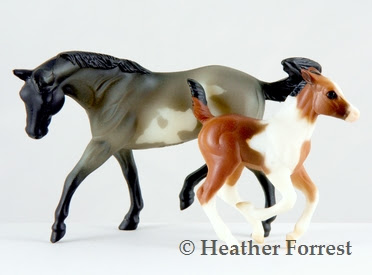 This time two different pinto spotting genes were showcased in the pinto set. The stallion in the #59983 Horse and Foal Gift Set - Blue Roan Pinto Stallion and Bay Foal is a black dun frame; the moderate size of the markings serve to emphasize the darkness of the body colour rather than lighten it. The G2 Cantering Foal serves to put a bright not into the set with its light baby bay colour and splashy tobiano pattern.


These four sets were available through 2006 when a new quartet with a complicated history  filled the Horse and Foal hole in the 2007 catalogue.