With a number of similar releases, re-releases, and renamed sets, the Frolicking Foal look-alikes can be a bit of a nightmare. 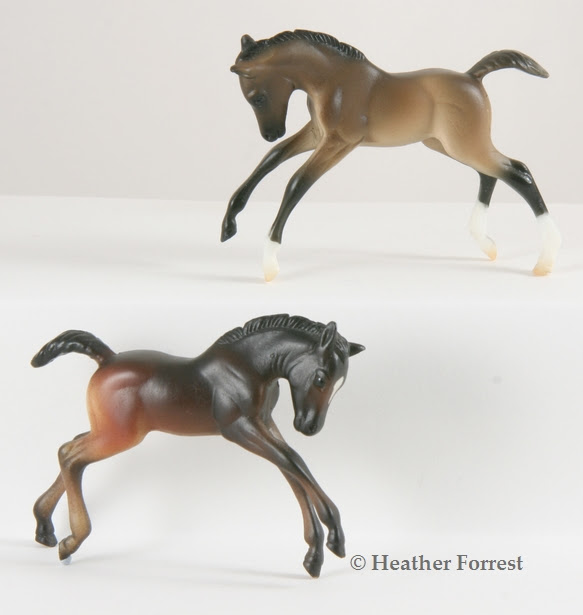 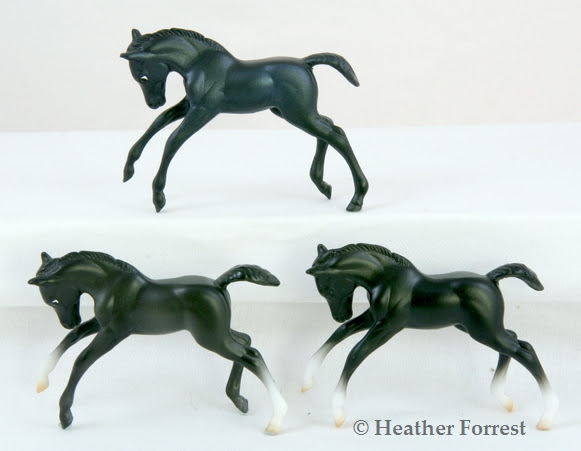 It's all a matter of socks when it comes to the black Frolicking Foals. Most distinctive is the foal on the top row from the #20012 Starlight Play and Activity Set (2006-07). This model is without markings aside from an elongated star and eye-whites and has a slight blue-ish metallic sparkle to its finish.

On the bottom-left, more of a very dark, shaded bay than a true black, the foal from the #59204 Stablemate Deluxe Animal Hospital (2010-Current) has airbrushed socks on the off-fore and near-hind legs, and a solid face.

The model in the photo above on the bottom-right is from the #5414 New Arrival gift set while the photo below is of the #5309 Horspital foal. 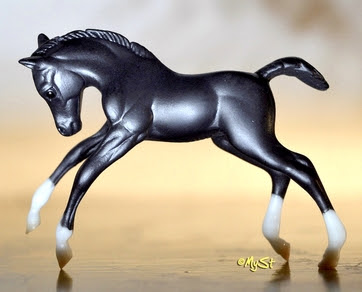 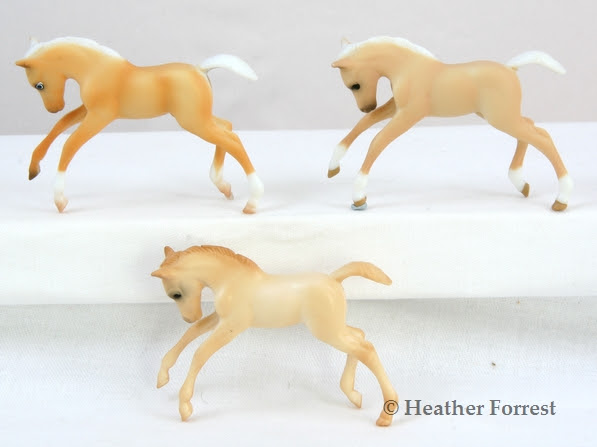 These three fall into the "creamy-yellow" category. First, on the top-left is the hardest to find in this group, the Frolicking Foal from the #6127 Stablemates Fun Foals Gift Pack (2008). This is the darkest of the three with a shaded palomino coat, three socks (not off-fore) and a blaze ending in a snip. The off-side eye is black with eye-whites, while the near-side eye is a beautifully detailed blue, with black eyeliner and eye-whites.

A paler palomino, with very little shading aside from darkly shaded eyes and muzzle, the #5409 Horse Play Set (2010-12) foal has four stenciled socks and tan hooves.

The bottom horse is not a palomino at all. This very pale chestnut foal from the #5962 Mystery Foal Surprise Gift Set (2013-Current) is completely without markings of any kind; even the hooves are body-coloured. 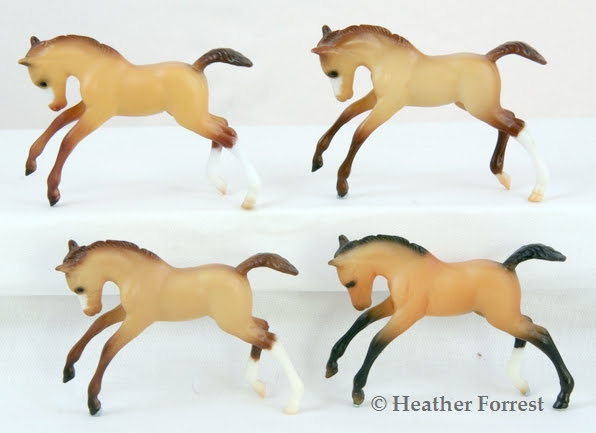 One of these things is not like the others - the buckskin is from the #59980 Horse and Foal Gift Set - Buckskin Lusitano Stallion and Foal (2003-06) set and should be a fairly un-shaded yellow-tan with an off-hind stocking.

The other three are from the #5924 Horse and Foal Set - Sport Horse (2007-15) and both versions of the #720599 Horse and Foal Set (2006) Target special run. The models in the three sets are the same, but can exhibit a fair amount of variation in the colour and markings. The body colour is a rather apricot chestnut dun with a faint dorsal stripe, a large blaze overflowing both sides of the face and hind socks - usually an off-hind sock and a near-hind stocking. The off-hind marking on the above models ranges from stocking to pastern and the blazes are all slightly different in detail and size. 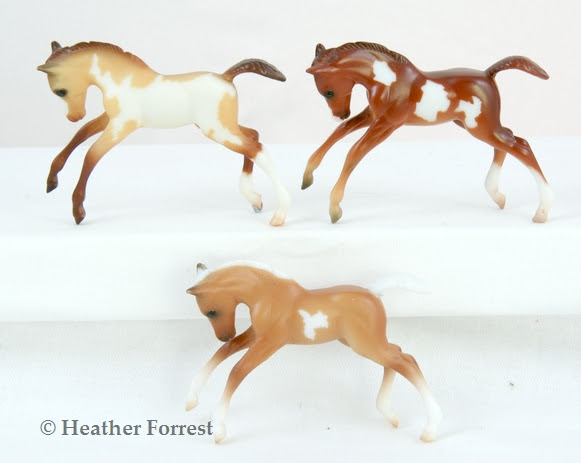 Genetically these three could all be frame, though the model on the bottom could also be some sort of splash, sabino, or one of the many white mutations. Colour-wise they're all pintos of some sort with a red base.

First, on the top-left is the very short-lived chestnut dun foal from the Target special run #720599 Horse and Foal Set (2006) gift set. This foal has a detailed frame overo pattern which stretches the length of the body, large blaze, near-hind stocking, and off-hind sock.

Also a frame overo, also with hind socks, and also a special run from Target, the  Frolicking Foal from the #720233 Pony Gals - Puppies and Foals Play Set (2009) has a patchier pattern, a less extensive blaze, and a dark red chestnut colour with a semi-gloss finish.

More tan than the other palomino releases on this mold, the #5932 Frolicking Foals Pocket Barn (2012-Current) foal has only two small patches on each side of the belly, a small blaze ending in a snip, four air-brushed stockings and darker tan shading on the leg joints and muzzle.