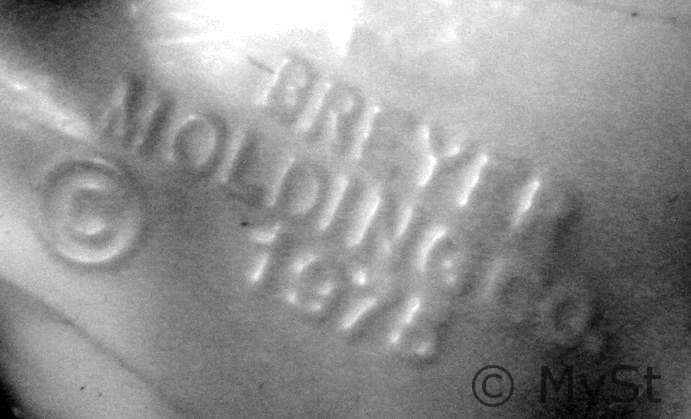 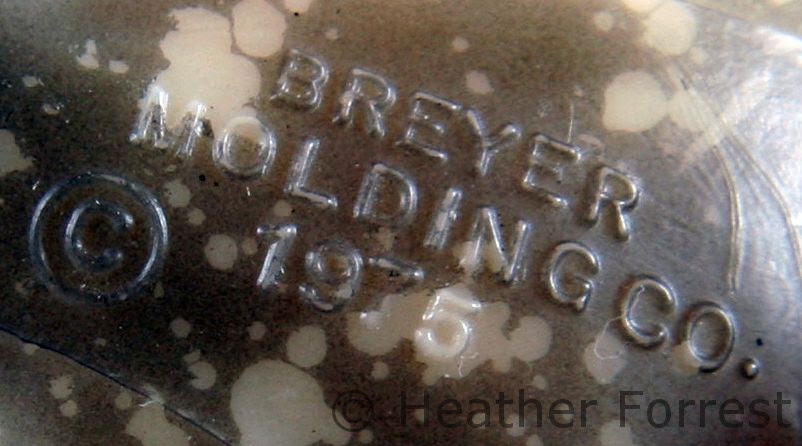 The G5 stamp didn't make it past 1976, but the N5 kept right on going. Some time in 1976 the stamp picked up a little pimple under the 7 in the date - dating based on the existence of 1976 chestnuts with and without the pimple.6 As the 1976 chestnut was actually released in September of 1975, maybe these non-pimpled N5s were from 1975 and the pimpled ones from 1976? That's just my theory, I have no concrete evidence to back it up. The pimple continued until the N5 stamp changed completely in the 90s.


In 1979 or 1980 the B mark was added to the Morgan Stallion, which remained through 1982/83. During the B era, along with the N5+Pimple-stamped models, examples were found sporting only the B mark and no copyright stamp at all!6 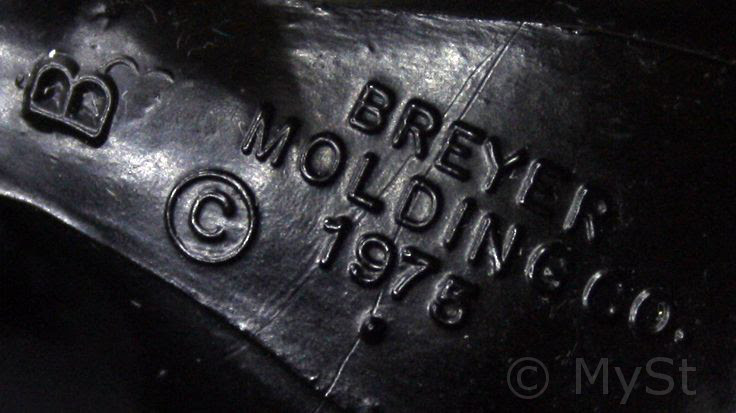 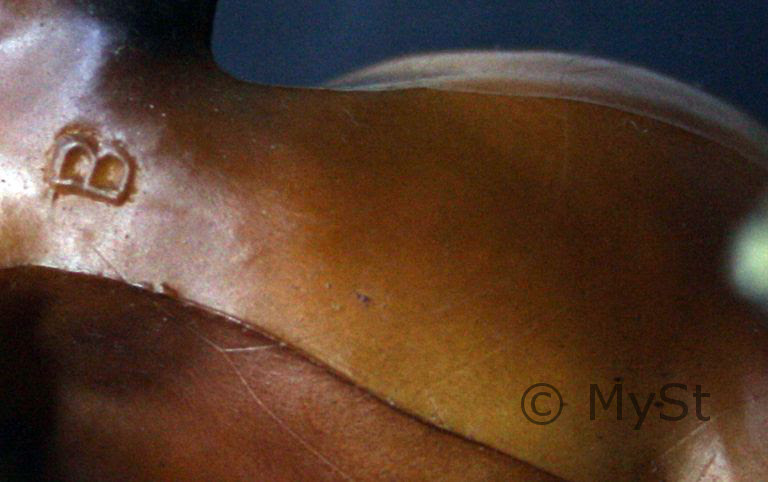 Between 1982 and 83 and through 1994 the N5+Pimple stamp was back to flying solo on the Morgan Stallion belly, but bare-bellied models were still popping up from time to time. Apparently this was so common in 1989 that many, if not most of the 1989 SR chestnuts were mark-less.6

Collector MySt found a N5+Pimple chestnut in her 1989 set, so they do exist and there may be others. At this late date it can be hard to tell if a model is actually the 1989 SR or the RR unless you're lucky enough to get a complete set, preferably unopened.


The dark chestnut 1990 Sears SRs seemed to all sport the N5+Pimple stamp, only to have the naked belly surge into common use again in 1991. The palomino 1991 Sears SRs seem to all be un-marked while the 1992 Sears SRs are back to carrying the N5+Pimple stamp. The 1991 SRs (and at least one RR chestnut from that era) have a small rough, ringworm looking patch on their bellies that the earlier bare bellies didn't have.6


Nancy mentions having a new plastic 1992 chestnut without a mold stamp6, but this was probably an anomaly as the new plastic models favoured the N5+Pimple stamp.

The Morgan Stallion underwent another copyright stamp operation some time in 1994. The timing on this one is a bit odd as the Morgan Stallions from the 1994 Saddle Club Set overwhelmingly sport the old N5 stamp and delicate, slim legs, while some, but not all of the 1994 JCPenney SR sets contain Morgan Stallions with a new stamp and thick, detail-less legs.


This new stamp (the Big Breyer stamp) was similar to the old in that the 5 and the N were still in alignment, but the spacing in Molding was tighter, now the last R in Breyer was over the C in Co. instead of the G in Molding. The pimple had disappeared as well.6 Other differences exist, but I feel these are the most important for quick identification. 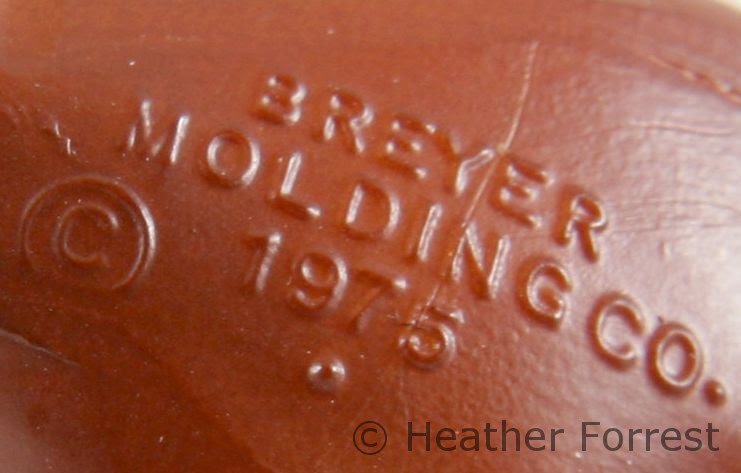 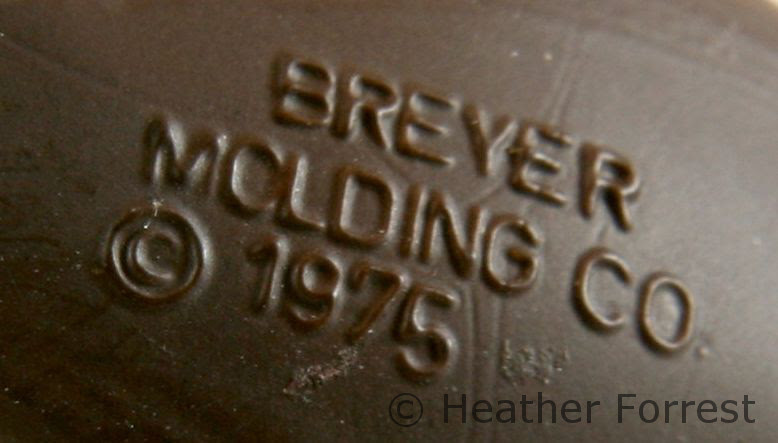 In the 4th edition of her book Nancy was working under the usual assumption of one mold = one cavity in the tool (the production mold used to create a plastic model), but in her 5th edition she had come to the conclusion that, based on these and other stamp irregularities, there must be more than one copy of some of the Stablemate molds.6

I think I may have some concrete proof of the existence of two Morgan Stallion cavities, besides the stamps. I have been staring at my pictures of this mold lately and began to notice a difference in the off-hind hooves - the slingback and the platform.

I sorted my models according into the two types to see if there was any sort of pattern; there was a middle section which could go either way as hooves do vary a bit due to the number of seams occupying such a small area, the level of prepping a model receives can greatly affect the shape of the hoof. I thought, if the hooves are different, there must be some other little tell as well, because with the hooves it can be hard to identify the type for sure.

Turns out, there is: it's all in the nostrils. Very early models - pre-pimple - are a bit difficult, but the difference is still there. The off-side nostrils in the early models start off very close to identical, but the far-side nostrils, from the beginning, came in two distinct styles, deep and flat.


It's easier to tell in person; one quick test is to stand in the light with your model and tilt it a bit. The light and shadow should make a straight line from one side of the nostril to the other on a flat nostril model. A deep nostril will have a shadow shape which just moves about as you turn the model.

Over-zealous seam cleaning can alter the shape of the nostrils a bit, but you should still be able to see this angle in the shallow nostril. The deep nostril looks like you could get a little, tiny finger in there for some green gold digging.

On slightly newer models (no earlier than 1976), the off-side nostril changes, too. A dent, just above the dent where the upper point of the nostril joins the face, interrupts the curve of the nostril. The inner lip of the nostril also features a few divots, giving that side a slightly ruffled look. These grooves tend get a bit more noticeable as the mold ages. 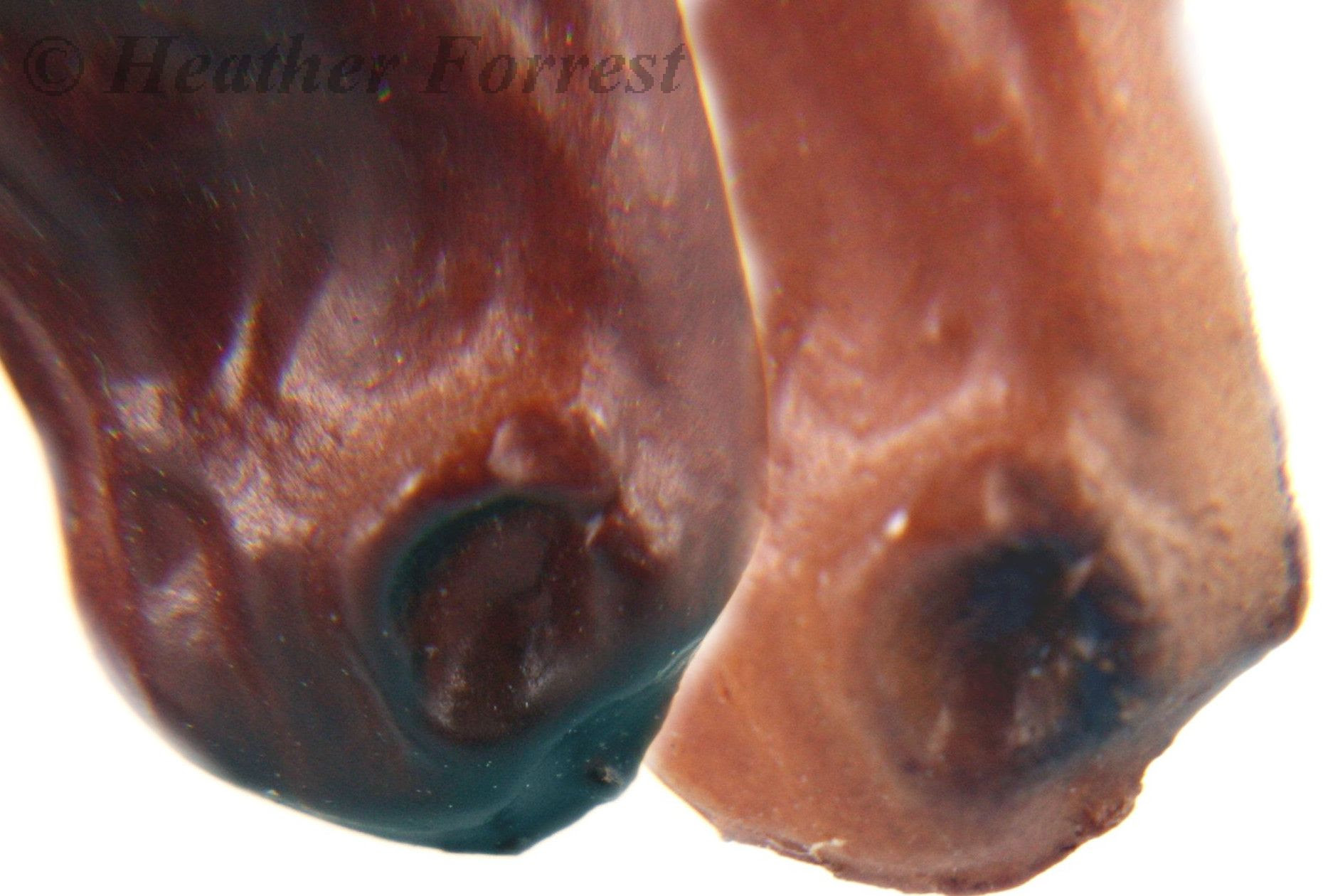 
After sorting the two molds, I took a look at the date stamps, and oh joy!, there was a pattern to the stamps!

The G5 stamped, slingback models seem to go away with the old plastic - Nancy's new plastic 1992 chestnut aside (maybe part of an early test of the new plastic in the US factory?) - leaving the field to the former N5 - currently Big Breyer - mold.

My tin-foil hat theory about this is as follows: maybe the cavities weren't always grouped in one tool with their twin as we've assumed. Maybe one of the Morgan Stallion cavities shared a tool with the Quarter Horse Mare cavity. This might explain why the G5/bare models are less common than the N5. The Quarter Horse Mare mold didn't need to be used that often, therefore there wasn't much point in only running out Morgan Stallions from it, so the N5 mold got more use.

The Quarter Horse Mare was discontinued shortly after the Mexico debacle in the late 1980s (supposedly due to damage), so maybe, even if they did decide to use the tool to pop out Morgan Stallions from time to time (maybe while the N5 was undergoing maintenance, possibly in 1989 and 1991), when it came time to ship the (big, giant, heavy) tools over to China in 1992, they decided it wasn't worth it to send the QHM/MS tool over with only one functioning cavity; after all, they still had another perfectly good Morgan Stallion cavity. This is only a theory. I have no concrete evidence, this was all pure conjecture.

Here is the stamp progression for easier reading. The only difference between my data and Nancy's is this, she surmises either cavity (most likely Mold 2) was stampless in 1975-76,6 while I have found my stampless models all fall into the Mold 1 category, but I lack definite data for early stampless models - my stampless bay slingback looks very much like he could be a 1975, but he could also be an early 1976. There may still be stampless Mold 2 models, I just don't have any. So, imagining a bare-belly above either category, here are the rest of the mold stamps:

Please, take a look at your G1 Morgan Stallions and drop me a line if you have evidence supporting or disproving my nostril/hoof/stamp theory! I only have my models to go on as it's difficult to make things out in pictures, and would love to have data from a larger sample group.

Edit: MySt over at My Stablemates has come up with an interesting theory. Maybe the Big Stamp mold isn't just a damaged and re-tooled Mold 2 cavity. Maybe something happened after the molds went over to China which necessitated the creation of an all new injection mold.

An existing Mold 2 G1 Morgan Stallion could have been used as the casting original which would explain him having the same nostril issues. This would also explain how those 1994 N5s were in production at the same time as the Big Stamp.

We do know of molds which have been damaged and repaired, why couldn't a small one be damaged and remolded? This is just a theory. Neither MySt nor I have any insider information on this subject and are just playing what-if.

On the flip side, examples of the Traditional Trakehner both before and after his retooling (smooth vs. rough body) have been found within the same run, which shows it is possible that there could have been enough blanks of the N5-stamped bodies to fill the needs of a special run and small regular run. Maybe that's why the Saddle Club set was mysteriously switched out in 1996. Again, this is only a theory, I cannot prove anything.

Next: The Stamp of Approval - B for Breyer & Other Mold Stamp Stories

Many thanks to MySt for allowing me to discuss her theory and to fill in the gaps in my belly pictures with those from her excellent site, My Stablemates where she is hard at work providing profile and belly pictures of all of her models.