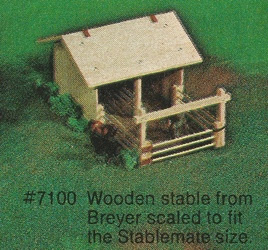 The original Little Red Stable wasn't actually red, it was green and it was called the "Stablemates Stable", but the idea was the same.

When the second batch of Stablemates molds were released in 1976, the first play set also made an appearance. The set consisted of the new Quarter Horse Stallion and Mare and a pair of the Thoroughbred Foals - all in dark bay - with their home, a palatial green cardboard stable, which could also be purchased separately. As is so common for this time, all four models came with a variety of leg markings, and in a plethora of shades and finishes. My variations on this set can be seen in later posts and we will also cover how to tell the two bay regular run foal pairs apart. 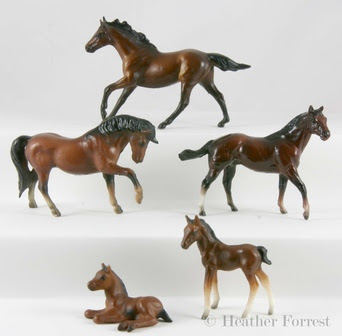 For the first year this set was called #7200 Stablemates Stable, but when the 1977 catalogue came out, it had been re-listed as #3085 Stablemates Stable Set and the picture was only of the box, no models to be seen. 1978 was the same, but the next year brought about something a bit different.

Beginning in 1979 and through 1980, when the set was retired at the end of the year, the name and number remained the same, but now the pictures showed a bay Seabiscuit instead of the Quarter Horse Stallion. This Seabiscuit appears to be the same as the assortment release. Because the 1977 and later catalogues only showed the box, it's not impossible for Breyer to have made the mold substitution pre-1979, but the hobby generally accepts 1978 as being the final production year for this G1 Quarter Horse Stallion. 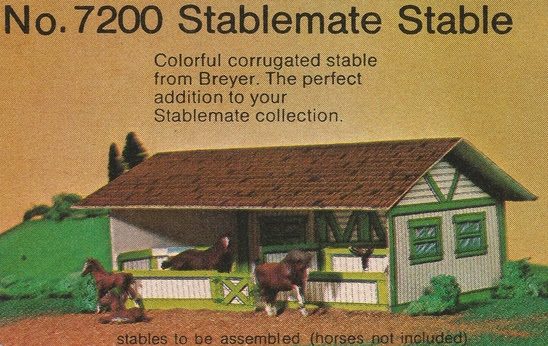 The 1976 catalogue picture showed a family which appeared to be dark liver chestnut sporting high white stockings and white faces. It is thought that these were just test models used as stand-ins for the actual production models for the catalogue pictures, but rumors exist of similar models being found in early sets. 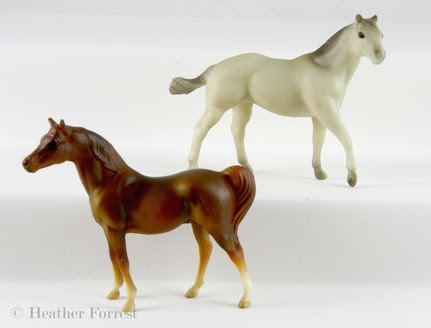 One of the 1997 mid-year releases (available in August) was new Stablemate Stable set - #59197 Stablemates Little Red Stable Set. This time the little barn was a red, modern, plastic affair with swinging doors and a tack room, and came with an assortment of accessories: a jump, three barrels, a water trough, and some fence panels in addition to the two Stablemates.

The promotional pictures in the mid-year release flier didn't look that interesting; the models were the same alabaster Citation and bay Arabian Stallion as in the individual assortment, but when the sets were released, collectors got a pleasant surprise. Instead of the recycled Stablemates, there was a smoky alabaster Quarter Horse Stallion and a surprisingly pretty, clear golden chestnut Arabian Stallion. Though this set ran for several years, it never appeared in the box catalogues and in 1999, the G1 molds were replaced by G2s. 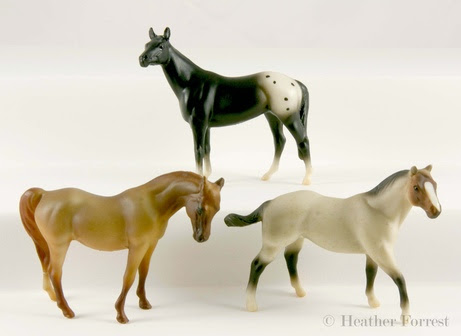 The only other G1 Little Red Stable set to be produced was a special run. In 1998, instead of the usual 12-piece set, Breyer released a trio of models with the same regular run barn and accessories through JCPenney.

The models in the #706698 Stablemate Barn set were a black blanket appaloosa Native Dancer, a bay roan Quarter Horse Stallion, and an interesting chestnut Arabian Mare. Apparently these sets weren't terribly popular at the time, because they are a bear to find on the secondhand market.

Many thanks to Sharon Walbridge for providing a picture of the Little Red Barn!