In 1976 collectors were treated to an actual picture of the Stablemate line-up. The model chosen to represent the Saddlebred was No. 5002 bay, which in this case was a beautiful light chestnut with four stockings and a bald face. Thus a legend was born. In her Breyer collector's guide, Nancy Young reports having only seen one model which resembled the mystery chestnut "bay", and the colour wasn't quite the same and it had a solid face, rather than bald. She theorized that particular model may have been an escaped test run or factory oddity.34 A true 1976 catalogue chestnut Saddlebred has yet to be seen.

That said, there are a good number of #5002 bays that are referred to as chestnut due to a lack of black on the legs. Technically they are chestnut, just not THE chestnut. Body colour for this run ranges from 'buckskin' to mahogany and the black on the legs might only cover one side, or just the knees/hocks, or be completely missing. The braids on these models were always left unpainted. 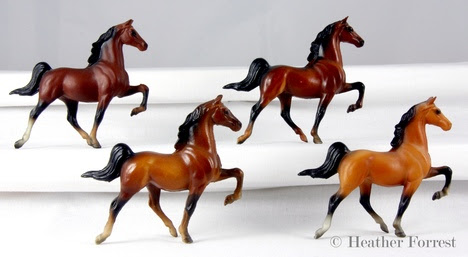 Here are my four #5002 Bays: two rich dark bays, one with a distinct hind stocking and matte finish and the other with vague-socks and a satin finish; the more standard medium bay with sloppy, partial black points which fade to dark brown in places and vague socks/stockings; and the much less common "buckskin" variation with much more distinct white markings.