The names listed above are as per the 1976 and 1977 catalogues; the most frequently used hobby variations are noted in parentheses. The Thoroughbred Lying Foal was originally called the Thoroughbred Lying-Down Foal in the 1975 catalogue, but the full name does not seem to have stuck. Generally, though, G1 Mold names are consistent throughout the hobby, but in the later generations, names tend to vary a bit.

Each assortment released was given a product number which was listed in the dealer and box catalogues. Each model was also given an individual number, which could usually be found in  the dealer or box catalogues or on the model's packaging.

According to a 1975 price list, the Stablemates were scheduled to be released in three batches during the year. The Arabian Mare and Stallion, Citation, Saddlebred, Thoroughbred Mare and Thoroughbred Foals at the beginning of 1975, Native Dancer, Seabiscuit, Silky Sullivan, and Swaps on May 1st and the Draft Horse, Morgan Mare, Morgan Stallion, Quarter Horse Mare, and Quarter Horse Stallion on September 1st. While collectors have reported acquiring models during this time-frame, the dates in this post are those used by the hobby.2


The year of 1975 was the year of the Stablemate Series; the smallest scale released by Breyer at that time, measuring in at a teeny 1:32 scale. An Arabian Mare and Stallion, Thoroughbred racing star Citation, a Saddlebred, a Thoroughbred Mare, and a pair of Thoroughbred Lying and Standing Foals (which were sold as a set) made up the line.

With the exception of Citation who only came in his portrait colour, and the Saddlebred which only came in bay and dapple grey, all the molds were released in three colours: bay, alabaster, and dapple grey for the Arabians and chestnut, bay, and black for the Thoroughbreds.


The Morgan Stallion returned this year, this time with his mate, the Morgan Mare. Both molds were released in three different colours - matching colours, of course: bay, black, and chestnut. The Arabian Stallion was also officially released in his correct colours as was Citation.

1976 also saw the introduction of a Draft Horse, a Quarter Horse Mare and Stallion, and Race Horses Native Dancer, Seabiscuit, Silky Sullivan, and Swaps. Like the other breed molds, the Quarter Horses were available in three different, matching colours: chestnut, palomino, and buckskin.

The draft horse was only available in chestnut (sometimes with flaxen mane and tail) and the race horses in their portrait colours. 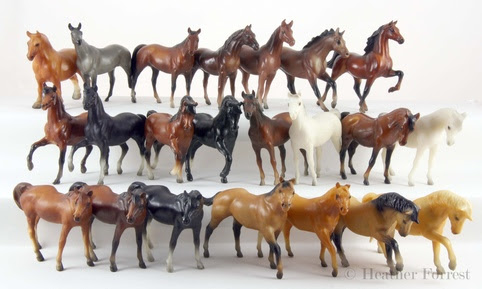 In 1977, what had been a flourishing Stablemate herd shrank a bit. The dapple grey Saddlebred, Arabian Mare, and Arabian Stallion did not return this year. Nor did the chestnut Morgan Mare, Morgan Stallion, Quarter Horse Mare, or Quarter Horse Stallion. The Stablemate foals also left the line which, with the exception of the Stable Set which was discontinued at the end of 1980, were not to be seen again as regular runs until 1997. 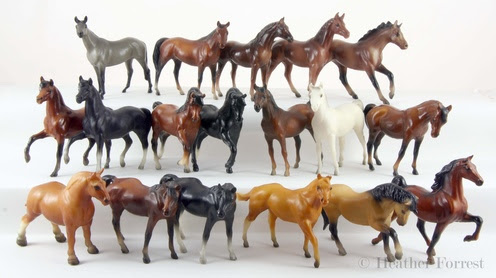 The alabaster Arabian Mare, buckskin Quarter Horse Stallion, palomino Quarter Horse Mare, and the chestnut Thoroughbred Mare were missing from the 1988 catalogue and were not to be replaced by anything new, at least not this year.


The 90s were approaching, so it was time for some changes. The five original Thoroughbred race horses were all that remained of the earlier assortments; now they were to be joined by some old faces in new colours:

The Arabian Mare and Morgan Stallion were re-released in one of their old colours. The mare was to all intents and purposes identical to her original alabaster self, but the Chestnut Morgan Stallion tended to more orange while his predecessor was more brown-toned, though they could also appear identical. 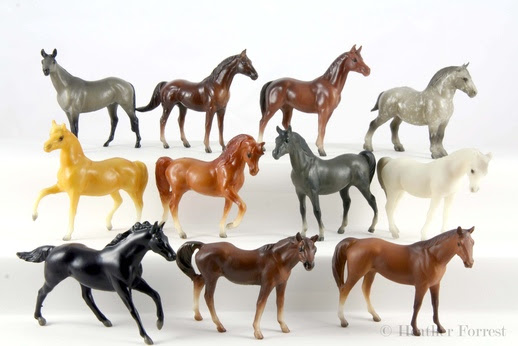 Of the five original Thoroughbred race horses, only Swaps, Silky Sullivan, and Native Dancer were left; Citation and Seabiscuit deserted the ranks of their famous peers to return as generic Thoroughbreds: Seabiscuit in black and Citation in a chestnut/sandy bay. The short-lived 1989 dark bay Thoroughbred Mare was replaced by the same mold in a brownish chestnut.

Collectors actually began finding these new models in stores in mid-1990, but they did not appear in the catalogue until 19913, so that is the date collectors have adopted.

The Saddlebred was discontinued and not seen again until 1996, this time as a JCPenney special run. The Draft Horse, Arabians, and Morgans remained the same. This was also the last year Stablemates were made from Cellulose Acetate, all later models would be made with Polystyrene.


This was the first year the Stablemates were switched to the new plastic. The same line-up was available, only now they were made from Polystyrene instead of the heavier Cellulose Acetate.


From 1975 until 1991 Stablemates were made with Cellulose Acetate or "Old Plastic" as it is commonly called. Starting in 1992 Polystyrene was used instead. This is, of course, referred to as New Plastic. Cellulose Acetate is a dense plastic while the Polystyrene is lighter and more brittle.

To test for plastic type, tap the model's hooves on a hard surface. If it makes a dull sound, it's old plastic, a clattery or clinky sound means it's of the new plastic. It's helpful to have a model of a known plastic type to compare with.

The 1992 line-up remained unaltered until 1995 when an entirely new collection of colours on the G1 molds was unveiled.