On the bottom right is the #5906 Belgian - Sorrel (2006-08) in a flaxen chestnut with lighter lower legs (almost vague socks), blaze, and unpainted tail decorations.

The Toys 'R' Us #760218 Stablemate World of Horses Shadow Box - Belgian (2010) on the bottom left is essentially the same as the regular run, but is more yellow toned and has a semi-gloss finish. 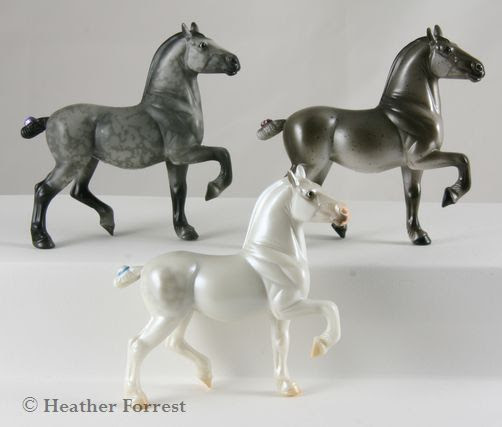 JCPenney #410512 Stablemate Parade of Breeds - Percheron (2009) on the top left is a dark dapple grey with water resist dapples on a lighter grey base, dark grey points, eye-whites, and a metallic lavender tail bun.

On the top right is the model from the #5971 4-Piece Gift Collection (2007-08). This model is a dark grey with a silvery metallic sheen, black flea-bites, and a plum-coloured tail bun with white spots. 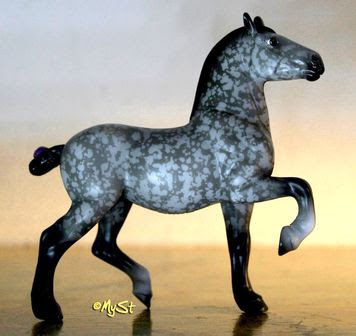 The model from the #6022 Gentle Giants (2015-current) is very similar to #5971, being a dark dapple grey with eye-whites, but the dappling is higher contrast, the points are black, the tail bun is plain lavender, not metallic and the off-fore and near-hind legs have socks. On the top is the JCPenney #410436 Stablemates Parade of Breeds - Russian Heavy Draft (2008). This model is a brown bay with a wide blaze, four socks, eye-whites and cranberry-coloured tail ribbons.

On the bottom is #5976 Gift Collection (2009-11). This model is very similar to the special run above with the bay colour, eye-whites, and four socks, but the colour is redder, the tail ribbons are green, and the face has a star instead of a blaze. Both of these models are bay tobianos. The #5907 American Spotted Draft Horse (2009-11) is a bright red bay tobiano with a wide blaze, four stockings, eye-whites, and blue tail ribbons. 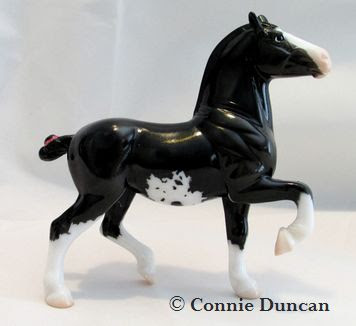 These two aren't terribly similar, except maybe on paper. JCPenney #410421 Stablemate Parade of Breeds - Percheron (2007) on the left is matte with a wide blaze, white muzzle with pink shading, four socks, cranberry tail rosettes, and eye-whites.

Many thanks to Connie Duncan and MySt of My Stablemates for providing pictures for this post!