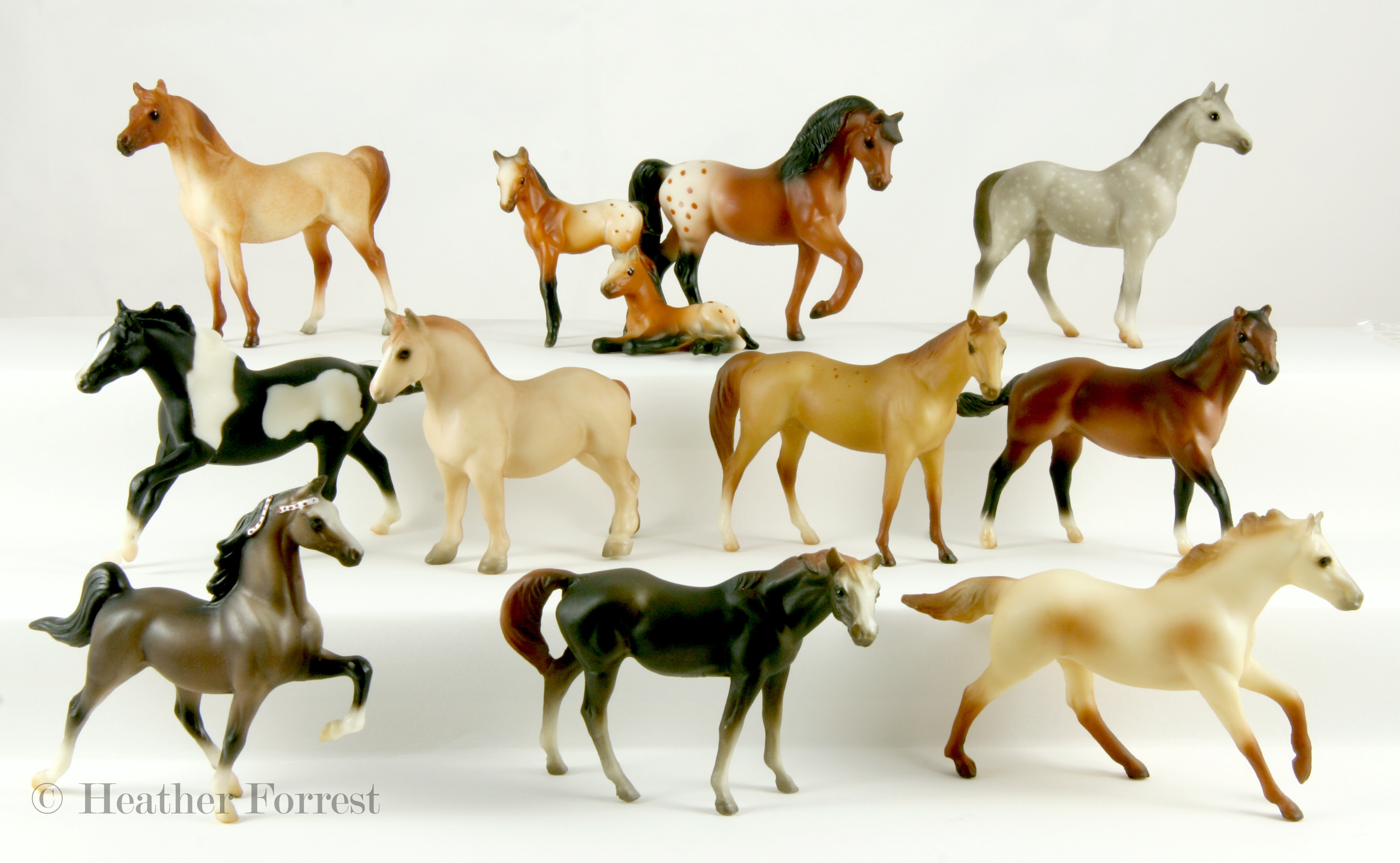 This collection seemed to be rather heavy on the pink and included some rather odd colours. First though was the undeniably cute family consisting of a bay blanket appaloosa Morgan Stallion and his matching twin Thoroughbred Lying and Standing Foals - both foals sporting airbrushed bald faces. Among the more standard colours were a dapple grey Swaps and a black tobiano Seabiscuit who sported a snazzy little blaze.

In the pink corner we had a very nice chestnut roan Arabian Stallion, a pale flea-bitten chestnut Draft Horse with a bright white blaze, and an odd, but appealing chestnut-going grey Seabiscuit. Two other models appeared to be in the going-grey department, a bay-going-grey Saddlebred with a bald face and red-on-white ribbons, and a liver chestnut-going-grey Thoroughbred mare, also with a bald face, though I have a solid faced variation, too.

The final two molds had some weird spots going on. The redish-tan chestnut Citation looked a bit like one of Breyer's peppercorn roans, but could also pass for having Bend-Or spots. Less easy to explain was the Quarter Horse Stallion.

At first glance he appears to be nothing less than a luscious bay with four perky little socks, but when you look closer you notice a tiny scattering of lavender or light blue specks over his hindquarters. At first collectors thought they each had received a damaged mode, one that had perhaps caught some spray from an errant airbrush in the factory, but after comparing notes on mailing lists and message boards they came to the conclusion he was meant to be that way.

The best we can tell, he might have been intended to be a snowflake appaloosa like this Traditional Standing Stock Horse Foal who also sports lavender/light blue spots. There's a rumor of spotless variations of the QHS kicking around, but a poll on Blab failed to turn up any examples, which doesn't mean they're not out there, but probably means they're rather rare.

This charming little set was the final offering of a special run Stablemate assortment from Sears; from here on out it was up to JCPenney to keep the tradition alive.

Many thanks to appyinthewind and Deb Walsmith for taking the time to examine the backsides of their G1 Quarter Horse Stallions for me!