With all the releases on this mold, there's sure to be a ton of look-alikes - and there are! 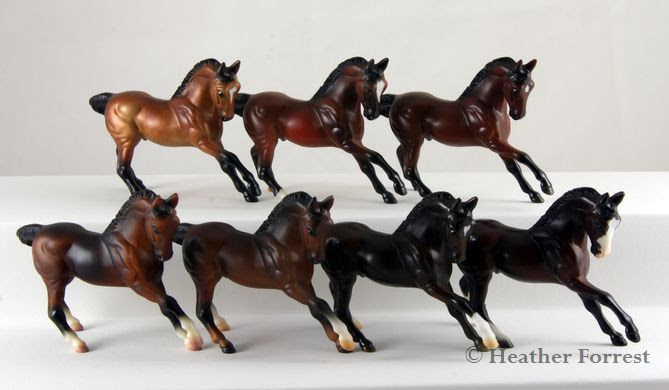 Target #720032 Stablemates Flower Barn (2006) is a buckskin or light bay with dapples, detailed brown eyes with eye-whites, elongated star, and a metallic finish.

JCPenney #410175 Stablemates Parade of Breeds - Warmblood, Bay (2005) is generally matte to satin medium bay and only has black shading on the leg joints with the lower parts of the unmarked legs being a reddish brown. The near-hind and off-fore legs have socks and shell coloured hooves.

JCPenney #410436 Stablemates Parade of Breeds - Hanoverian (2008) is a dark bay, usually satin to semi-gloss, with a heart-shaped star, near-hind and off-fore socks. 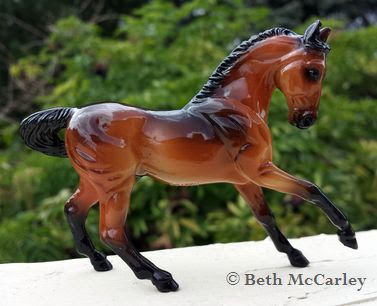 QVC Silver Cup Series, First Collection (2002) is a shaded buckskin or sandy bay with a high gloss finish and no markings. 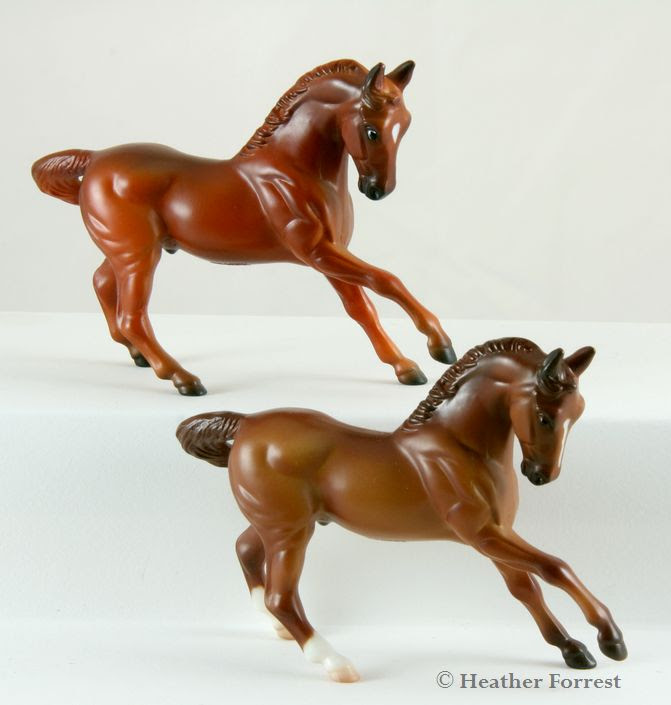 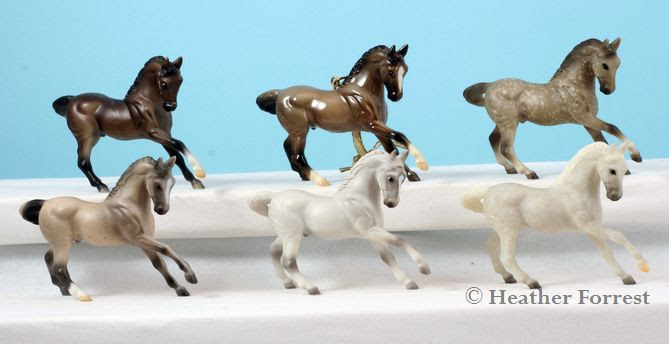 Play Set #5363 English Riding Set (2010) is a dark rose grey - grey with just a hint of red tones - with eye-whites, near-hind and off-fore socks (a popular combination for this mold), eye-whites, and a white tip to the tail. The finish is usually satin to semi-gloss and this model tends to have paint issues due to being packaged wearing rubber tack.

Just About Horses #701704 Double Exposure (2003) is often called "grulla", but more of  rose grey, lighter than the first model. It has a high gloss finish, a blaze, off-side socks, and a gold/white ribbon attached to a ring in it's back.

Play Set #5204 English Rider and Saddle Set (2000-04) is a medium grey with resist dapples and while it doesn't have socks, the lower legs are lighter than the rest of the body.

World Equestrian Games #9161 Selle Francais (2014) is a white grey which has been painted white with soft grey shading on the face and joints, blaze, eye-whites, and lighter lower legs, but no socks.

TJ Maxx #701774 Horses of the World (2004) is a white grey with unpainted plastic, a fine mist of grey flea-bites, shaded muzzle, and three grey hooves with the off-fore hoof being cream-coloured. 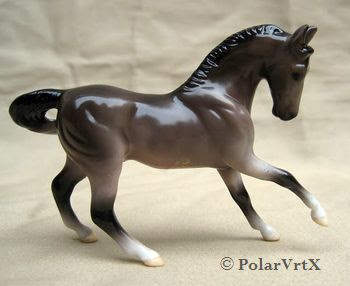 BreyerFest #711502 Porcelain Stablemate Warmblood (2002) is somewhat similar in colour to Double Exposure, but is lightly dappled and has black points, four socks, and a glossy finish. 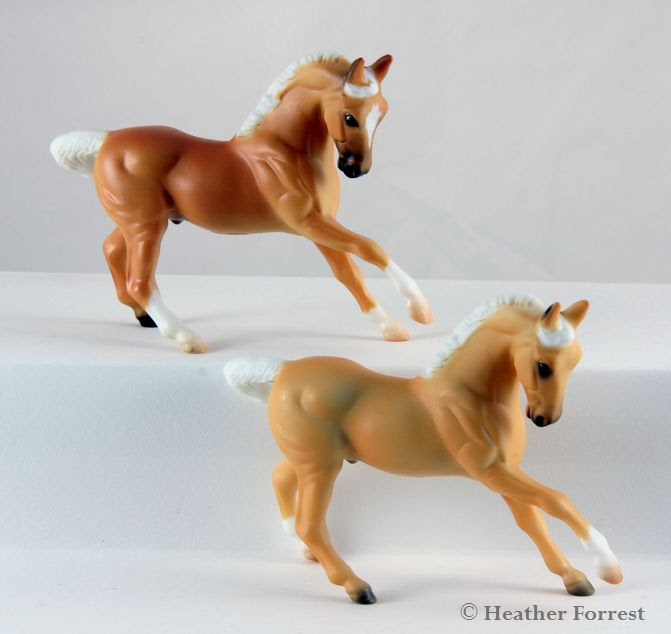 Walmart #750010 Flicka in the Wild Stablemates Set (2006) is a darker "macaroni and cheese" colour with an elongated star, eye-whites, shaded muzzle, and three socks, not near-hind. 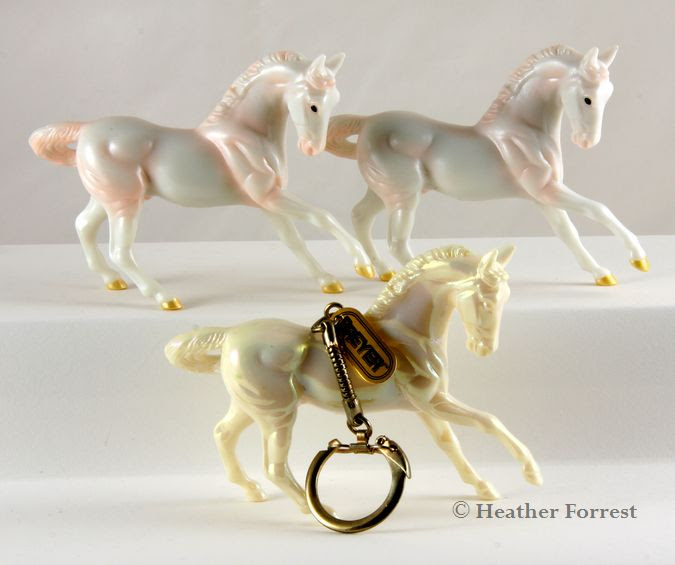 Both of the models on the top row are from the Target #720229 Pony Gals - Princess Kayla Fantasy Adventure (2009) and they are a pearly white shaded with pink with gold hooves. The amount of pink shading can vary greatly.

Not shown is the JCPenney Breyer Stablemates Truck and Trailer Set (2008), this model is a pearly white with blue-grey shading and eye-whites. 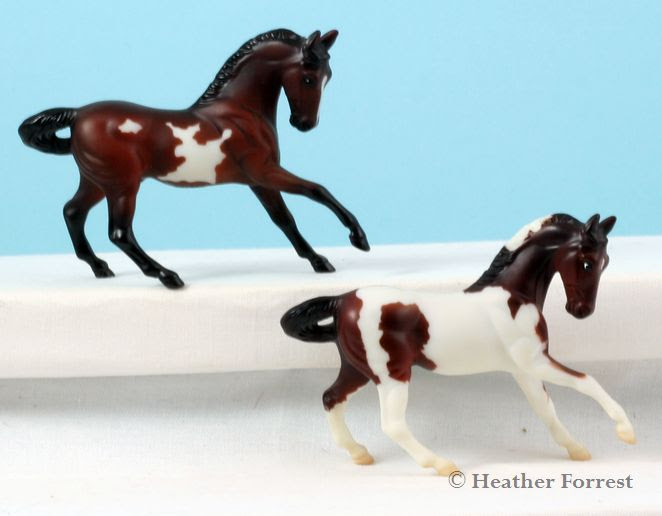 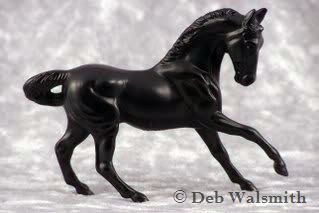 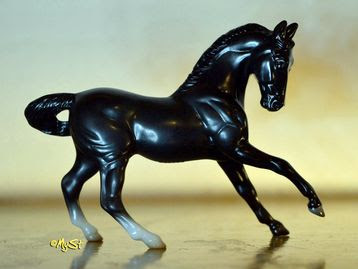 Velvet Rope Event Painting Session Stablemate (2008) is a solid black model while the Gift Set #5388 Competing at the Games (2016-Current) is a satin to semi-gloss black with star and hind socks. 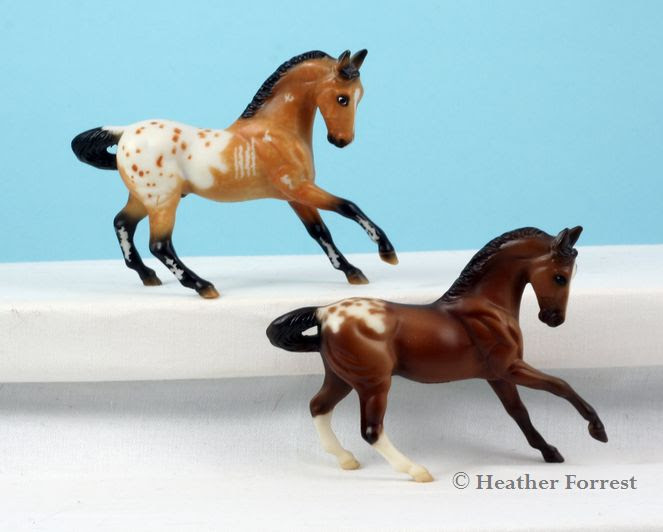 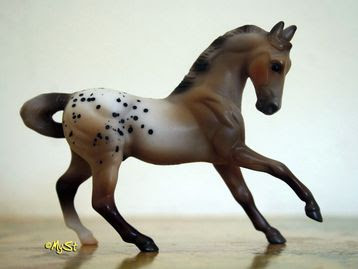 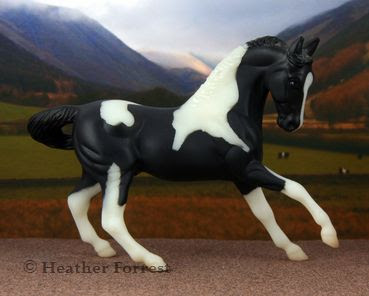 Just About Horses #790798 Special Edition Stablemates Gift Set (1998) could also be found in the
BreyerFest Breyer Store Special Mystery Box (2004) and is a black tobiano with a blaze, and four stockings. These models are produced in old plastic.

Many thanks to Deb Walsmith, PolarVrtX, Beth McCarley, and MySt of My Stablemates for providing pictures for this post!