2005/06 proved to be a big couple of years for the horse and harness sets. Not only were a new batch of regular run sets released, but several special holiday sets made their appearance as well. In 2005 Breyer began to experiment with other holiday promotions besides their usual Halloween and Christmas offerings. An Easter-themed "Spring" collection included a variety of models and toys, including the #5990 Cottontail Express (2005).

The G2 American Saddlebred included in this set is a slightly metallic, pale palomino. Her ribbons are white with yellow and pink Vs. Her wagon is pastel yellow, pink, and purple with a purple harness. Also included are baskets of flowers, a bunny, and a tiny bundle of carrots. 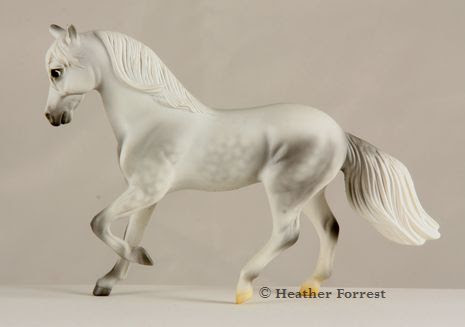 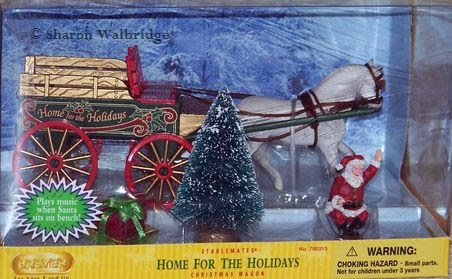 The first Christmas-themed Stablemate also appeared in 2005 with the #700315 Home For the Holidays Christmas Wagon (2005). There have been several dapple grey G2 Paso Fino releases, but none as softly dappled and delicate as the snowy mare in this set. The wagon is a festive green and red with gold trimming and brown harness. When Santa is placed on the seat "song" plays. Gaily wrapped presents and a "real" Christmas tree make up the cargo. Christmas 2006 found the G2 Paso Fino again decked out for the holiday in the #300560 Holiday Sleigh (2006) play set. 2006 must have been a snowy year, because the chestnut appaloosa G2 Paso Fino was pulling a sleigh instead of a wagon this year. The colours - green, red, and gold - were the same as last year, but instead of Santa we have a jaunty little man with a load of wrapped gifts and a Christmas tree to deliver.