The G2 Paso Fino is heavy on the look alikes, though only a few of them are particularly tricky. 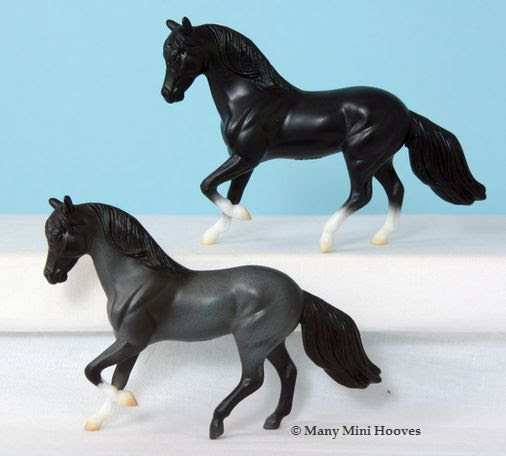 The black-based models are fairly simple. What may look like a shaded black or dark grey from a distance (or in a blurry eBay picture) is the black roan model from the #5412 Stablemates Horse Lover's Collection Shadow Box - Paso Fino (2011-current).The body is a shaded slate grey covered with roany speckles, with a dark head and legs, a black mane and tail, and fore-socks with shell coloured hooves.

The Paso Fino from the #5940 Mystery Foal Surprise Gift Set (2012-13) is an inky black with four socks and shell coloured hooves. 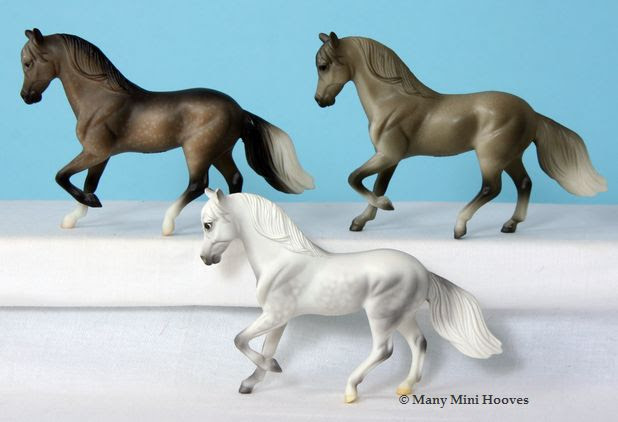 Out of the three greys, only two are fairly similar. #700315 Stablemates Holiday Wagon with Music (2005) contained the stunning dappled white grey model. The body colour is bright, chalky white with a delicate wash of grey shading and air-brushed dapples. The forelegs are shaded grey on the joints and hooves while the back legs are lighter with cream hooves.

#5904 Dapple Grey Paso Fino (2003-06) and Blockbuster Special Run #10304 Hidalgo Stablemates Mustang Play Set (2004) are a bit trickier. Both models are a dappled medium grey and both are dappled using the water-resist method. The model on the left is the special run and has more of a rose-tone to the grey, darker shading, off-fore and near-hind socks, and a blaze. The tail is partially shaded white with a very distinct stripe of dark shading on the underside.

The regular run has a more even colour with softly shaded lower legs and tail. 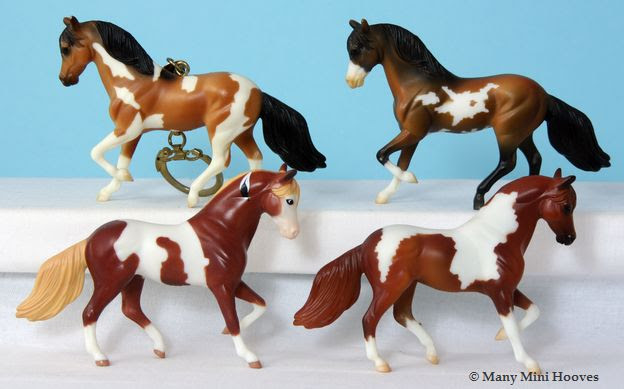 Both of the models on the top row are buckskin pintos. Toys 'R' Us Special Run #730300 TRU Reflections (2000) is a sandy buckskin tobiano with four stockings. The keychain will usually be enough to identify the model, but some collectors prefer to remove the hardware to make display easier. In the set it was paired with a matching Traditional El Pastor; the pattern first debuted on the bay pinto #116 Sin Par - Cips in 1984, and was also used with a black-basecoat on the 1997 show special #700297 Desperado.

On the right is the model from the JCPenney Special Run #410175 Stablemates Parade of Breeds - Paso Fino Cross, Buckskin Pinto (2005). Besides being a frame overo instead of a tobiano, the body colour is more heavily shaded. The muzzle is white up to the cheek and the face has a blaze. There are socks on both fore-legs.

Two chestnuts, very similar in colour, but one is flaxen while the other has a self-coloured mane and tail. In late 2005/early 2006 the G2 Paso Fino replaced the G1 Morgan Mare in the #5312 Spirit Family Play Set with Rain (2006-07). Rain is a bright red chestnut tovero (tobiano + splash) with flaxen mane and tail, four socks, tan hooves, and an apron face. Most distinctive is the black eyeliner and painted eagle feather dangling from the mane onto the off-side of the neck.

In comparison, the mare from the #5918 Pocket Barn with Mare and Foal (2007-08) seems pretty plain. She's almost the same colour as Rain, but her colour is slightly shaded and her mane and tail are self-coloured. The pattern is a rather simple blanket-style tobiano with three stockings and an off-hind sock. This model was also released as a special run through various retailers and called #720052 New Arrival Barn - Stablemates Pocket Barn with Mare & Foal (2007). 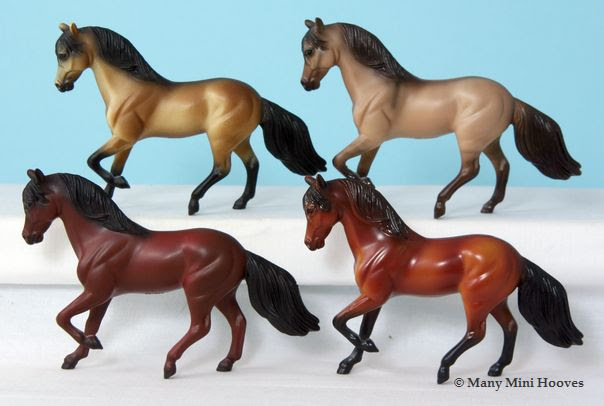 Of the two bay duns on the top row, only one model is the now standard new plastic. The model on the left is from the Just About Horses #790798 Special Edition Stablemates Gift Set (1998) which was produced in old plastic. This model is a beautifully shaded golden brown colour with a softly shaded dorsal stripe and dark, nearly black points.

The dun factor on the BreyerFest Special Run Breyer Store Special All American Tribute - Florida Cracker (2007) is more dramatic with a very distinct dorsal stripe, shoulder stripe, and dorsal barbs - small stripes coming off the main stripe of the dorsal. The body colour is more of a peachy-tan and the points are chocolate-brown. 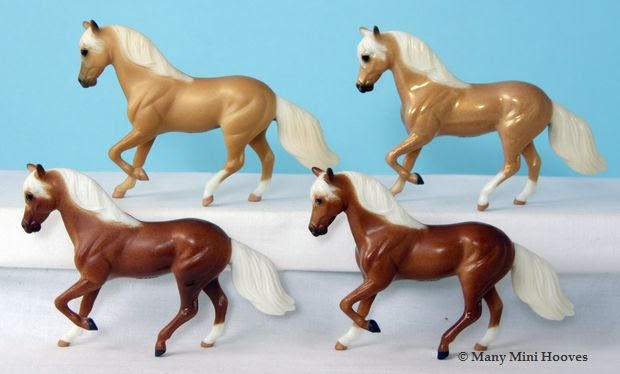 When it comes to the G2 Paso Fino, you're either a light palomino or a dark palomino; there's no room for those in-between shades.

On the dark side we have #5209 Cowgirl and Western Saddle Set (2005-06) and the re-release as #5376 Horse Crazy Create and Color Barn (2013-14). My Horse Crazy model seems to be slightly more golden and shiny, but that can probably be attributed to simple variation and the production gap between the models. These models have a dark palomino coat, which makes them look almost like flaxen chestnuts when compared to the light palomino releases above. They have socks on the fore and hind off-side legs and have shaded muzzles.

The matte light palomino is the TJ Maxx Special Run #701774 Horses of the World (2004). She is a golden-yellow palomino with creamy mane and tail, and socks on the hind legs. All four hooves are tan. The  BreyerFest Special Run Single Day Ticket #711206 Trixie (2006) is basically a glossy version of the Horses of the World Paso. This model sports a high gloss, darker facial shading, black front hooves, and her coat has a bit of a sparkle to it.

All four models have a speckley roan effect to their body colour, much like that seen on old G1 chestnut models, though it's most noticeable with the darker palomino colour.