When it comes to look-alikes, the G2 molds don't disappoint; the sheer number of releases compared to the G1 numbers makes a healthy quantity of look-alikes a certainty. The colour breakdown is similar to that in the real Andalusian breed - lots of greys, some bays and chestnuts, and the rare dilute. All of the bay and buckskin models are new plastic. Of the two buckskins on the top, the paler of the two is #59980 Horse and Foal Gift Set - Buckskin Lusitano Stallion and Foal (2003-06). The colour tends to be a bit flat; the hooves are black and the legs have no markings. The darker model from the JCPenney #410306 Breyer Truck and Trailer set (2006) has four high white stockings and a richer, nicely shaded, dark tan colour.

Of the bay models along the bottom, only the model on the left, #5904 Dark Bay Andalusian (2003-06), is the only regular run. The model in the center, Target #720116 Dark Bay Andalusian (2006), is a special run re-release of the regular run. Both models are a darkly shaded red bay with hind socks, but the Target special run tends to be much darker with a semi-gloss finish. #5904 can also be found in the Tractor Supply Company Play Set #301119 Horse Adventures (2009). 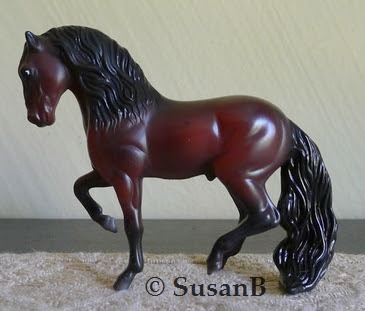 Dark bay has certainly been a popular colour for this mold. The G2 Andalusian in the 2015 Tractor Supply Company #701733 Open Road Adventures (2015) play set is very similar in colour to the other bay releases, but this time he is completely without markings, less heavily shaded, and sports eye-whites. The finish is satin to semi-gloss. While both models on the top row are palominos, the body colour of the darker model can make it easy to confuse him for a very flaxen chestnut. The light palomino model on the left is from the #5981 Stablemates Horses Gift Pack (2002-06). Compared to the other palomino the colour is very pale with a nicely shaded face. Many have four very vague socks while others can be found with more distinct, though still airbrushed socks. The darker palomino is #10316 Graceland Stables Stablemates Assortment - Tucker (2011-2012) and is a rich caramel palomino. He has four stenciled high stockings and a large snip. At least one variation without socks exists.

The two chestnut models could be confusing or misrepresented by an unscrupulous seller. The model on the left is plastic while the smaller one on the right is porcelain. They are very similar in colour, however and someone could attempt to pass off the plastic model as the ceramic one removed from the base. While both have a near-fore sock, the JCPenney #410174 Stablemates Parade of Breeds - Lusitano, Chestnut (2004) has his second sock on his near-hind leg. The #8138 International Miniatures Collection - Portuguese Lusitano (2004-05) has his other sock on the off-hind foot and tends to be more heavily shaded. Like the bay BreyerFest Amando, the Andalusian model from German Show Special Stablemate Set (2006) is essentially a beautifully high-gloss version of the JCPenney #410174 Stablemates Parade of Breeds - Lusitano, Chestnut (2004), though the coat colour appears to be more of a pale orange-tan than a deep red-brown. Don't be taken in by a very satin JCP special run, the incredibly limited German SR has an unmistakable mirror finish. There aren't quite fifty, but the G2 Andalusian can be found in a wide range of grey. We'll tackle this group moving from left to right, top to bottom. First is the model from the #5307 Circus Play Set (2001-04); it is a pure, thick white with no shading, bright black eyes, and yellow hooves. The JCPenney  #410512 Stablemate Parade of Breeds - Andalusian (2009) is essentially the same as the model from the Toys 'R' Us  #760218 Stablemate World of Horses Shadow Box - Andalusian (2010). My TRU model is slightly darker and a touch more pearly than the JCP SR, but this has more to do with individual variation than an actual difference between the releases.

In the middle row are the mid-grey models - two are regular runs, one is not. The only G2 Andalusian thus far to sport the modern dapples is the BreyerFest Breyer Store Special #711080 Stablemates 20th Anniversary Commemorative Set - 2004 Nobel II (2009) - isn't that a mouthful?! Of the lighter grey models it has more darkly shaded joints and the shading in the mane and tail is striped rather than nebulous. While the front hooves are grey, the back hooves are cream coloured thanks to the soft hind socks. Like the real Nobel II, the model sports a tiny black brand on his near hip.

#5606 Andalusian (1998-02) in the middle of the second row is the first release of the G2 Andalusian and one of two to have the (thankfully) short-lived air-brushed spot dapples. The model is a light grey with heavy darker grey shading, blueish spotty dapples, four vague-ish socks, grey hooves, and a wispy, hand-painted snip. Representing the third-dappling technique on the far right is the stallion from the #5940 Mystery Foal Surprise (2012-13). This is the only grey model have a brown-tone to the grey and bubble dapples. The joints are darkly shaded, the mane and tail are distinctly two-toned, and there are four stockings and cream coloured hooves.

The only old plastic G2 Andalusian is from the Just About Horses  #790798 Special Edition Stablemates Gift Set (1998); it is also the darkest of the greys. Like #5606, it has the blueish spotty air-brushed dapples. The head is more lightly shaded than the body and there are four socks with shell-coloured hooves. #701774 Horses of the World (2004) from TJ Maxx is the only black release so far. It is a pure, inky black with socks and cream-coloured hooves on the near-hind and off-fore legs. 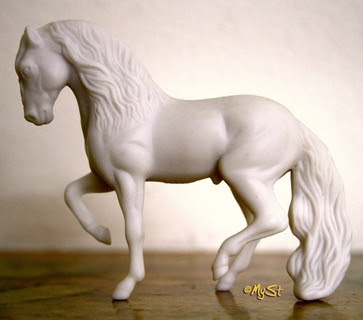 The model from the craft set is painted with white primer and has a plain gold-coloured ring in the back. The movie gift is unpainted white plastic with a slight green tinge and when charged glows green. If the hardware has not been removed, the gold ring holds a keychain loop and a BREYER tag.

The left-over Movie Gift models have also been used for prizes and other give-aways at BreyerFest and other Breyer-sponsored events.

Many thanks to Deb Walsmith, SusanB, and Myst of My Stablemates for providing pictures for this post!