The picture of the Stablemate Assortment was not the only attraction in the 1998 July/Aug issue of Just About Horses; the announcement of a new special run was bound to steal the show.

5,000 sets of the complete line of the new G2 molds in special run colours were offered to Just About Horses subscribers. The sets were to come in presentation boxes, complete with a certificate of authenticity. As if this weren't enough, as icing on the cake, these models would be produced, for one time only, in old plastic! 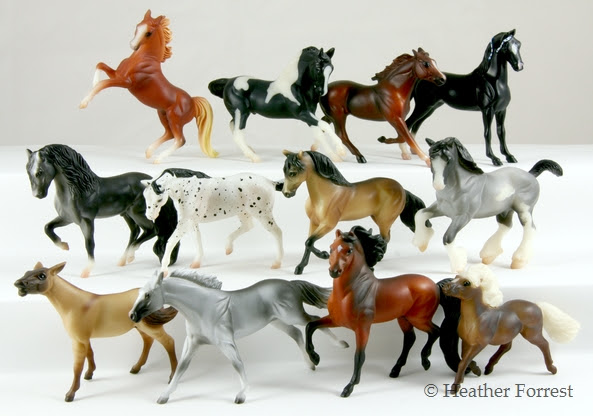 The colours in this set, like those in the new G2 assortment, pushed the boundaries of previous Stablemate paint jobs. Dapples, a wide variety of facial markings, detailed duns, and unusual colours such as silver dapple and sabino roan were all trotted out.

Some models, such as the black leopard appaloosa Stock Horse, grey Thoroughbred, and bay Prancing Morgan had their white markings painted on rather than being masked, unpainted plastic. Both the dark dapple grey Andalusian and the black silver Shetland Pony sported the new airbrushed dapples.

The paint used for this run seemed to be thicker than usual which could give some models a thick edge to their masked markings. Complaints about the roan Clydesdale in particular were so bitter that Breyer produced replacement models for some people.

The sets were delivered in December - mine arrived on December 21, 1998, less than a week after the new G2 assortment became available at my local Breyer shop.