Birthday Week - Footnotes: One of These Things is Not Like the Others - G1 Oddities

In the early pre-China days of the Stablemate line production oddities, small unannounced Special Runs, and other unexplained phenomenonmenomenom were not uncommon.

In the possible unannounced special run category is the mystery buckskin Arabian stallion. The owner of the Arabian Stallion from the set was told it was a special run from the 70s and came with a black Swaps; Nancy Young was unable to find a second source or any further information. The Arabian Stallion is a mustard yellow buckskin (like the Quarter Horse Mare) with four stockings and grey hooves17, the Swaps is presumably a solid black as markings weren't mentioned.

This mystery Swaps is most likely an escaped test run and was found in 2005 at a garage sale with a few 1970s era Stablemates and a Hartland foal - all for $3! He is old plastic, splatter dappled, and sports the tail gap seen on very early Swaps releases. 42 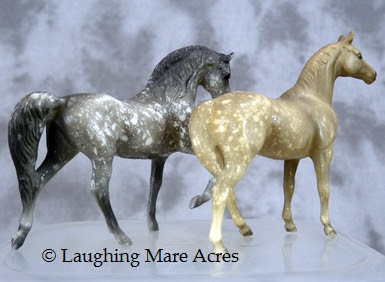 He is shown here with a G1 Morgan Stallion to compare colour and dapple style - there's a fairly clear view of the tail gap.


Speaking of one of these things not being like the others, these 1976 new releases didn't end up looking much like the catalogue models. 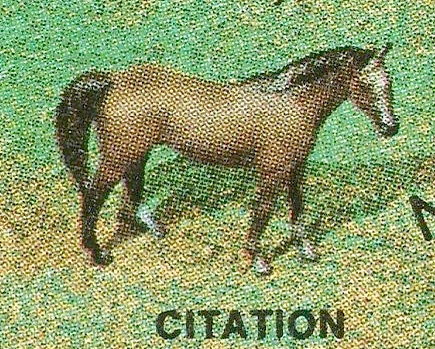 Pictures from the 1976 Breyer box catalogue

It was not unknown during this time for Breyer to use test models or artist-proofs as stand-in models for the catalogue pictures. The colour variations in the 70s and 80s models are too numerous to mention; amongst these were reports early in production of a bay Silky Sullivan variation38.


The models below definitely don't look anything like their catalogue counterparts. These guys are factory culls - models discarded during the painter process for various reasons. While not competitive show models outside of collectibility classes, culls and mistakes such as these are popular with some collectors. 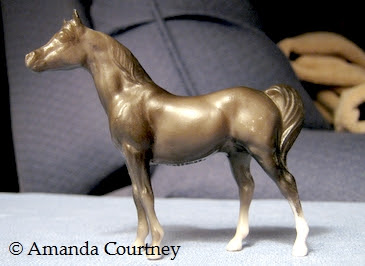 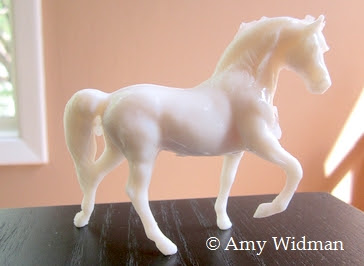 Finally, the flockies: there is some debate as to whether these are original finish models or not. Several small companies, including Riegseckers - the creators of Breyer's flockie releases - produced custom flockie models in the 80s. The Draft Horse flockies have been found in several seemingly consistent colours - chestnut, bay, light & dark grey, and palomino, with loose or bobbed manes and red or green tail ribbons 41 Edit: It's official! At least some of the G1 Draft Horse flockies are Riegseckers custom flockies! Many thanks to Miss Lindy Pinkham who unearthed this vintage Riegseckers sales flyer! I'm assuming the "Clydesdale" model is the bay with the high whites; the other colour options seem fairly self-explanatory. For those yearning for a mini flockie of their own, a small handful of artists have been known to create modern flockie customs. Materials for creating your own can be easily found online as well - wear a good mask at all times during the flocking process.

Many thanks to Amanda Courtney, Amy Widman, Lindy Pinkham, Stacy Quick, and Laughing Mare Acres for providing pictures of their oddities!