As we've established, many of the G1 molds have twin molding cavities; others only seem to have one cavity, but have still undergone some changes.

The G1 Draft Horse sported two different copyright marks; they do not seem to appear concurrently. The mold started with the "floating" mark which had a significant gap between the copyright symbol and the 1 of 1976 and slightly wide-spaced lettering. This mark lasted until around 1995 when it was replaced with a new mark, possibly the result of some over-enthusiastic mold polishing. The new "tight" mark had the copyright symbol right up against the 1 of 1976 and more tightly spaced lettering.12


The other non-twin mold with significant stamp changes is the G1 Quarter Horse Stallion. Like many of the others, the earliest models lacked any kind of mold stamp, leaving them with a clean, smooth belly. Soon after the proper 1976 stamp was added to the mold.34 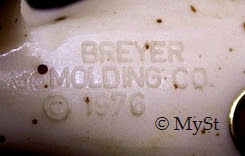 From 1976 through 1994, the copyright symbol of the stamp was slightly indented, falling between the M and the O of Molding and was a rather small C in a large circle. The mold underwent some repairs in late 1994/early 1995 and the stamp was changed slightly with the R of Breyer lining up with the C in Co. and the copyright symbol hanging slightly to the left under the M of Molding. This mark lasted until late 1995 when the mold experienced further issues.34

From late 1995 through much of 199734 the G1 Quarter Horse Stallion mold sported a bare belly for the second time in the mold's life, but this time it wasn't a nice smooth surface - the remains of the mold mark was partially visible and the plastic appeared bumpy and smeared.

In late 1997 a new stamp appeared, this time the change went a little further than just spacing changes - the date had changed!

The text on the new stamp was much more widely spaced than then older stamps and instead of the date 1976, it now sported a small 1975.34 This stamp lasted until the mold was discontinued at the end of 2005.


Many (possibly all) of the molds went through a short stampless period early in their first year of release. Evidence of stamplessness exists for the following molds:

Many thanks to MySt for providing the G1 Quarter Horse Stallion belly picture!