Part of the appeal of this set is its rarity - only 200 of these sets were produced in late 1984/ early 1985 making this a small run even by current standards; in the past thirty years there must have been some losses, making the survivors even harder to find and bringing down the final run count. Besides rarity, this set is just pretty, especially that old-style red roan, a colour which seems to drive collectors wild no matter what mold it's on.

There seems to be a lot of confusion when it comes to identifying models from this set. I think part of the problem comes from the lack of online pictures and the poor quality of some of the pictures that are available. Hopefully the following Look-Alike segment will help shed some light on the situation. 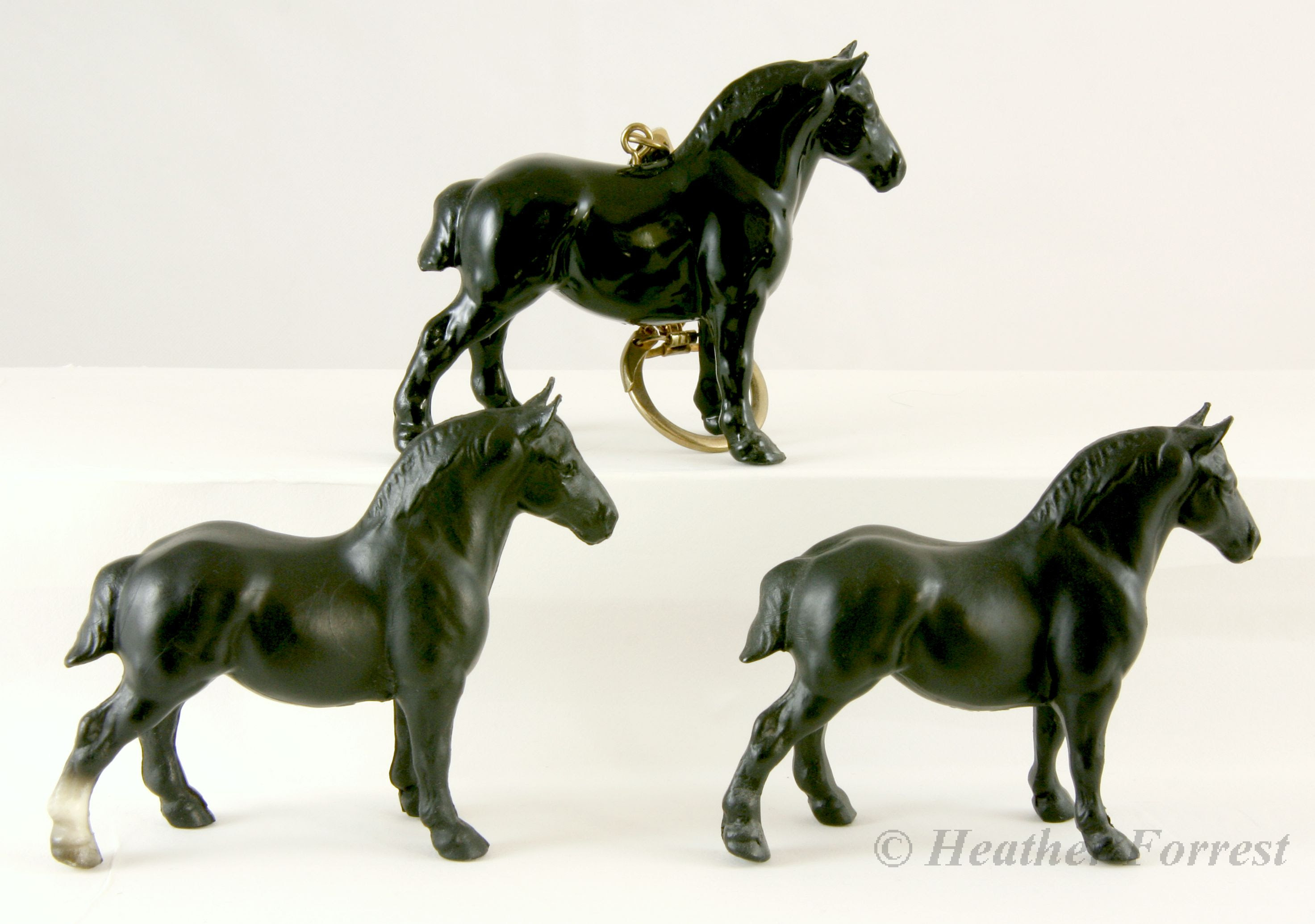 First we have the black model. There's not really a lot you can do with black. The three black G1 Draft Horses are all old plastic, at least the BreyerFest SR has the courtesy to have a high gloss finish and to have a keychain sticking out his back. The Sears SR is a little trickier. The only real difference is that off-hind sock and grey hoof the Reigseckers model is sporting. Overspray or a missing sock is possible, but I would be highly sceptical of anyone trying to pass a non-socked black G1 Draft Horse off as a Reigseckers SR. What many sources refer to as the 'bay' model is actually really a dark chestnut. Models with black points may exist, but Nancy Young states those she's seen are all lacking any black. She seems to think the majority have solid faces, though bald faces do exist 13; mine is a baldie. The brown coat of this model is delightfully rich - more so than the other two bay releases. As you can see there's really no confusing this model when you place him with the others. The two palomino G1 Draft Horses are some of the easiest to tell apart. The 2002 QVC special run is new plastic, highly shaded, and sports a stenciled blaze and a high gloss finish while the Reigseckers is matte to semi-gloss, old plastic, and is the typical 1980s-style palomino with a vague air-brushed bald face - some models may have solid faces due to over-spray. The chestnut in this set (bottom left) is the one that gives collectors the biggest headache. The regular run chestnut comes in such a range of variations that it can be difficult to tell the RR and the SR apart. In general the Reigsecker is more red, less orange, has a flaxen-ish mane and tail, solid face, and an off-hind stocking (though you can see mine is trying to work a second vague-sock there). The paint finish (on mine at least) has a delicate, almost transparent feel which really sets him apart from my regular runs. The besides the palomino, the other ID no-brainer is the soft grey model. The other grey G1 Draft Horse is undeniably alabaster with a stark white coat and grey mane and tail. The Reigseckers SR has a delicate smoke grey body with dark, almost black mane and tail. Mine has a bald face and vague socks, but some models may be without white markings.

The last two models in this set are unmistakable, though one is fairly easily fakeable. The old-style red roan is in a class all by himself with his creamy base-coat and wild chestnut splatter spots. Unfortunately it's easy to fake the unpainted model - all you need is an old plastic G1 Draft Horse in any colour and a bucket of bleach water, so buyer beware.

Just because I thought we didn't have enough pictures in this post, here's some profile-style pictures of the individual models. 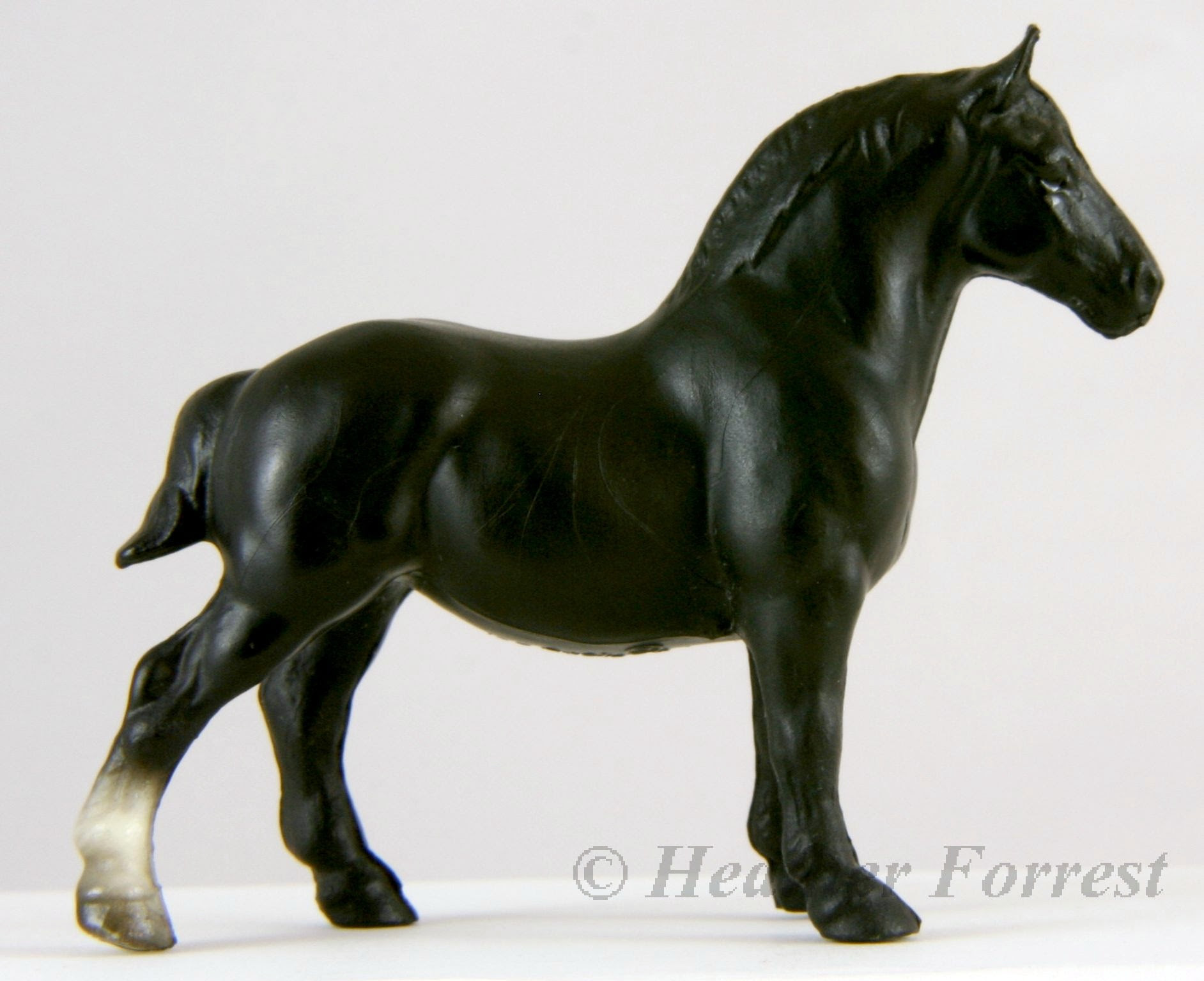 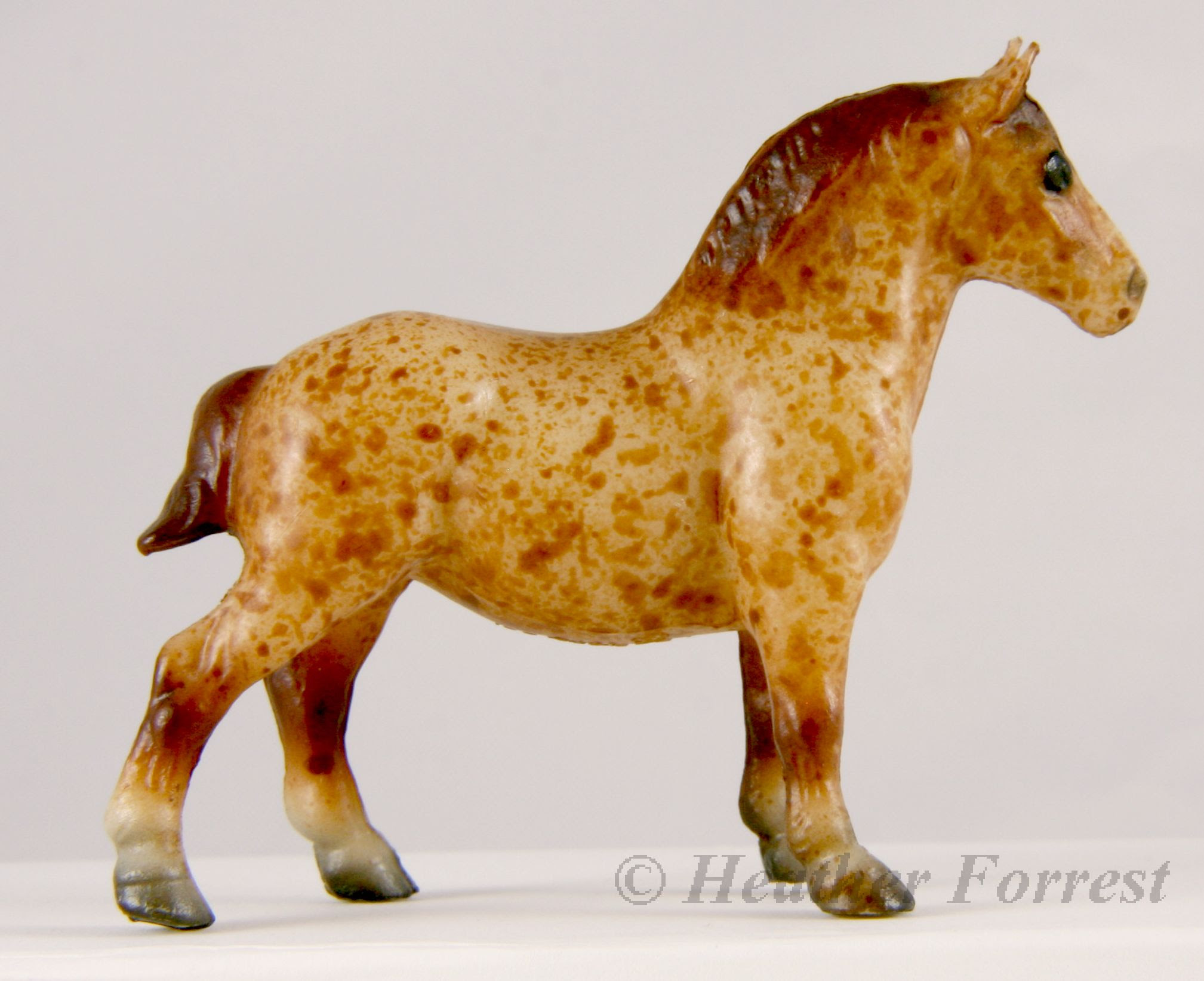 Finally, to sign off with a bit of a flourish, I've managed to put together a mini Variation Gallery with the roan Draft Horse: Many thanks to Kris Chernoff of Model Equus, Elizabeth Emswiler, and NoLine Farm for generously contributing pictures from their collections for this post!