The bay and chestnut group can be pretty confusing. #1 there is the original #5013 Arabian Stallion in bay while #s 2 and 3 are #5181s. These two runs are easy to tell apart in person as #5013 (1.) only came in old plastic and #5181 (2. & 3.) only came in new plastic. Colour-wise, the older run generally had much darker points while the newer run's points tended to be a bit wishy-washy and had a tendency to appear chestnut.

The bottom row contains two true chestnuts and an impostor. #3 is, as mentioned above, a #5181 which was meant to be bay, but my example missed his last date with the airbrush before being set aside to dry, leaving him without his black points and shading. Even though he appears chestnut, it's more of a red/brown-toned chestnut while #4, one of the two models from the #59197 Little Red Stable play set, has more of a gold/orange tone to his coat.

The easiest of the group to identify is #5, the stallion from the  #59974 Arabian and Foal gift set. Unlike the others, he lacks any leg markings and has a very flat, matte colour. The difference in his finish is due to his light tan undercoat. His mane and tail are meant to be self-coloured and I have yet to see much variation in the run. 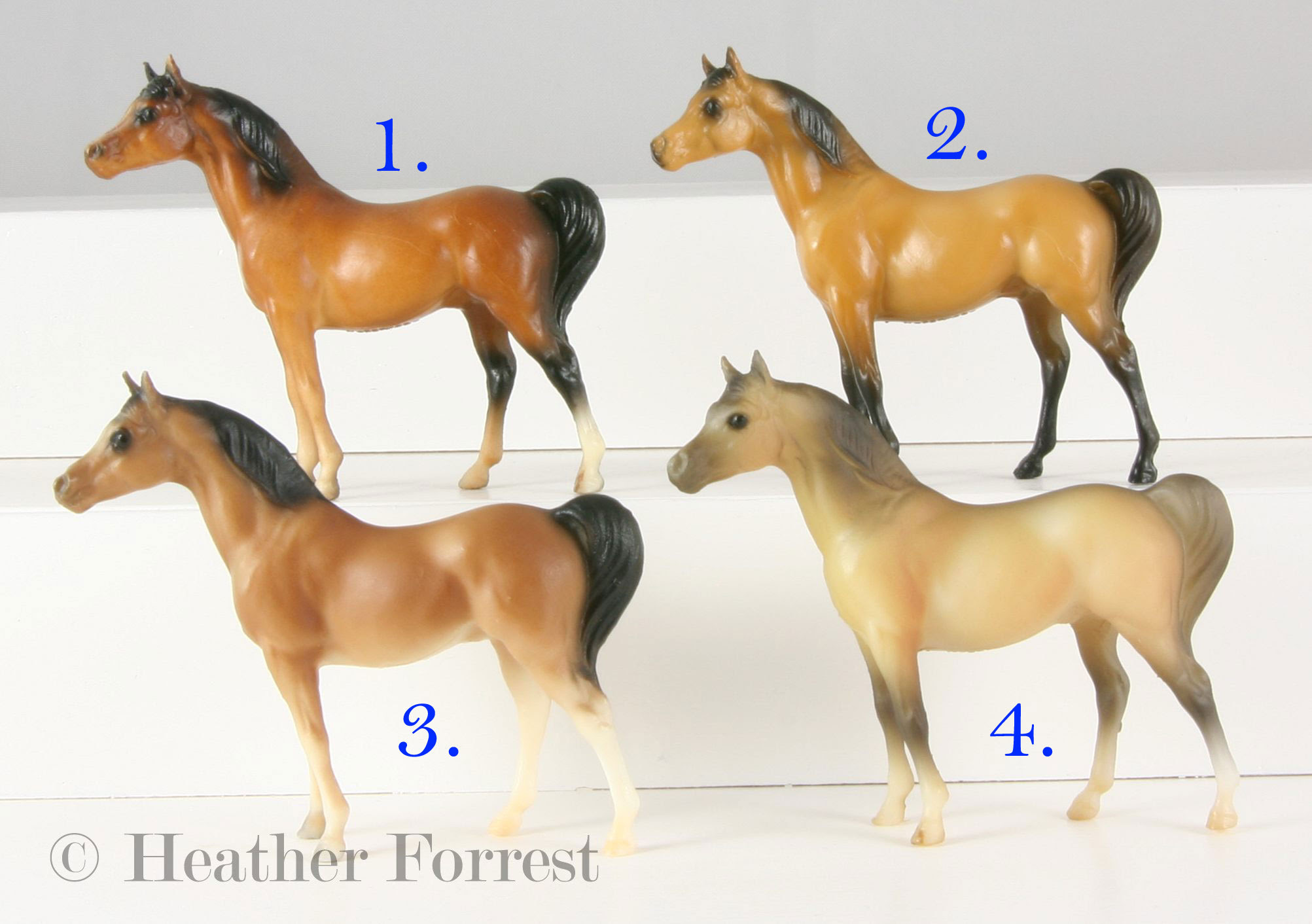 Is it bay, buckskin, or dun? First the easy tell, the top two models were only produced in old plastic while the bottom two were only produced in new plastic. #1 is a very light version of #5013 and the only regular run in this quartet. You can see how it might be easy to mistake him for #2, a Sears SR from #495601 Stablemate Assortment II 1990, but the colour of the special run is more yellow-tan without any red and always has solid black legs with no markings. His black points also tend to be more of a dark chocolate than a true black.

The new plastic models (3. & 4.) don't look very similar when they're together, but could be hard to tell apart if you were only going by a written description. Call him a sandy bay or a light buckskin (we'll get the genetic work-around for the lack of black on his legs in a different post), either way #3 is drastically different from #4 when you see them together. #3 is from the JCPenney Special Run #710695 Set of 12 Miniatures 1995 and usually has a vague, airbrushed bald face, white to very pale tan legs, and black to dark brown mane and tail and a decidedly brown coat.

In comparison, #4, one of the two Arabian Stallions from the JCPenney Special Run #710897 12-pc. Parade of Breeds 1997 set is quite peachy-yellow with grey shading and points (some examples are less transparent than mine giving them a darker colour) and a line of fuzzy grey shading down his back (more like counter-shading than a proper dorsal stripe). He also tends to be found in that weird 1997 translucent plastic rather than the usual stuff.

Though this pair are both greys, the differences between the runs are quite obvious. The first model is a regular run #5120 and can be found in both old and new plastic. They tend to be more of a blue/black-toned grey compared to the purple-toned rose grey of the Arabian Stallion from the 1996 JCPenney Special Run #711096 12-Piece Stablemates Set. The special run model is only available in new plastic and sports one to two socks while the regular run has up to four. 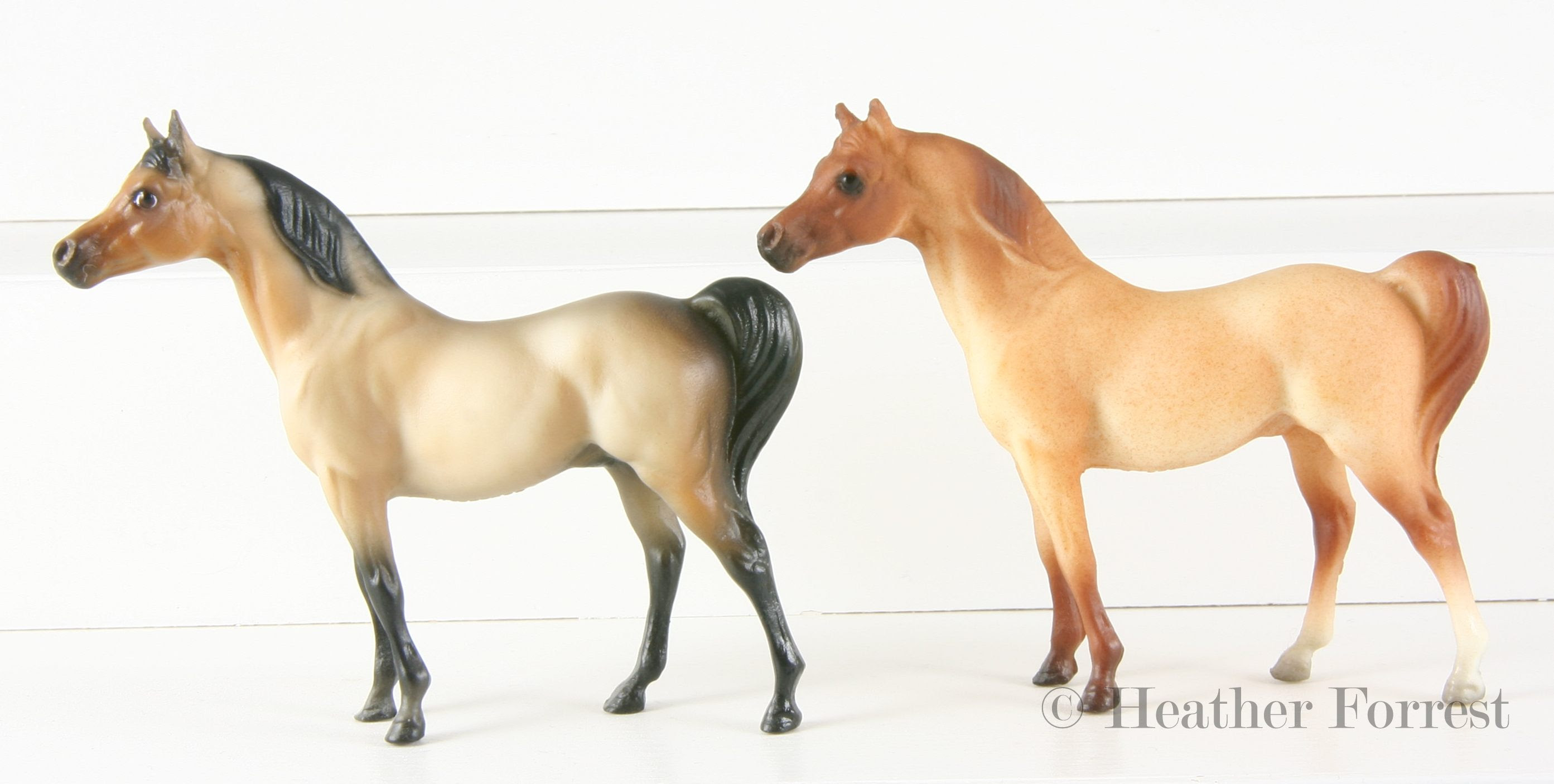 Besides both being roan horses, these two look nothing alike; however, inconsistent use of colour terminology could cause some confusion when looking over a text-only sales list. Properly these two should be called bay roan and chestnut roan, but many people would use 'red' roan for either colour. So if you see a roan G1 Arabian Stallion on a sales list, ask for some details or a picture.

The 2004 JCPenney Special Run #410174 Stablemates Parade of Breeds - Arabian Stallion, Rose Grey stallion should have black points, a grey-tone to his body, a perky little blaze, and detailed brown eyes; the stallion from the Sears Special Run #770198 12-pc Stablemates set from 1998 should have chestnut points, hind socks, a pinkish body with little chestnut flecks, and plain black eyes.

The 2004 SR was originally labeled as "rose grey", but the greying process almost always starts with the head, so most greys would not have the dark face this one possesses, but as a friend of mine likes to day, the only unbreakable rule with the grey gene is that no rule is unbreakable. :) Typically, though, the dark head on this model with the rest of his colouring I would go with roan over grey.