The foal molds tend to have a large quantity of look-alikes and the G2 Scratching Foal is no exception. 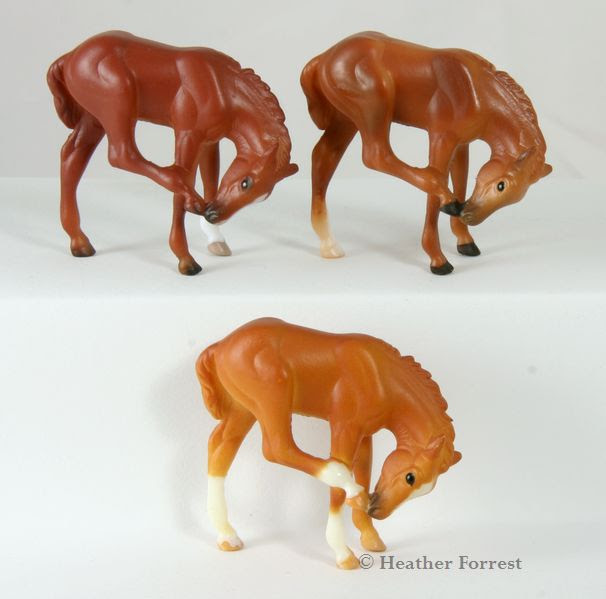 The three chestnut models are all very similar. The foal on the top left is from the #5972 Stablemates Fun Foals 5-Piece Gift Pack (2007-08). This model is the darkest and reddest of the three with a single distinct sock on the near-fore leg, dark hooves (buff-coloured on the white leg), and a star/stripe/snip facial marking.

On the top right is the foal from the #5306 New Arrival Play Set (2006-07). This one is more shaded than the others and is a soft orangey-tan. The hooves are a dark grey except on the near-hind leg which has a vague, airbrushed sock and a shell-coloured hoof. It has no other markings.

Finally on the bottom is the foal from the #5655/#5994 Stablemates Fun Foals Gift Pack (2000-01). A much brighter orange than the others, it also sports three socks (not near-fore), tan hooves, and a large star and blaze. The bay releases on this mold are exceptionally rich in colour. The most recent model is on the top left and is from the #5980 Show Stoppers (2012-14) set. This is the brightest of the three and features eye-whites and a star.

On the top right is the hardest to find of the three and is from the K-Mart special run #6127 Stablemates Fun Foals Gift Pack (2008). This foal can look more like a very dark chestnut than a bay as the points tend to be closer to the body colour than black. It has a near-hind sock and eye-whites.

The foal from the #59982 Horse and Foal Gift Set - Red Dun Morgan Stallion and Dark Bay Foal (2003-06) is a beautifully shaded dark bay with absolutely no markings at all. The palominos on this mold are nowhere near similar. The foal from the #5982 Stablemates Fun Foals Gift Pack (2002-06) is a bright, clear yellow palomino with four socks, large blaze and  white muzzle.

#5604 Palomino Peruvian Paso and Foal (2008) was a special run carried by Tractor Supply Company  and other similar retailers. It is a dark, sooty palomino or could even be called silver bay. The only markings it has is a large sock on the near-hind leg and eye-whites. Now for the chestnut blanket appaloosas. Until recently, these were only special runs. First came the JCPenney #410175 Stablemates Parade of Breeds - Appaloosa, Chestnut(2005) on the bottom row. This model is a flat orangey-chestnut with a lacy hip blanket, and socks on the near-hind and off-fore legs, and a small star.

The other foal is also a JCPenney special run, this one from the #410443 Stablemate Parade of Breeds - Appaloosa (2010) set. It is a flaxen chestnut or dark palomino with an airbrushed blanket, polka-dot spots, stenciled near-hind sock, airbrushed fore-socks, star, and eye-whites. A second airbrushed blanket appaloosa joined the line-up in 2015 with the #5884 Mystery Foal Surprise Gift Set (2015-Current). This foal is very similar to the 2010 special run, but it is paler, less orange, and has air-brushed socks on the near-side legs, a star and snip, and no eye-whites.