The look-alikes for the G2 Cantering Foal are fairly simple except for the palomino models; I always have to refer to my database when trying to identify these models. 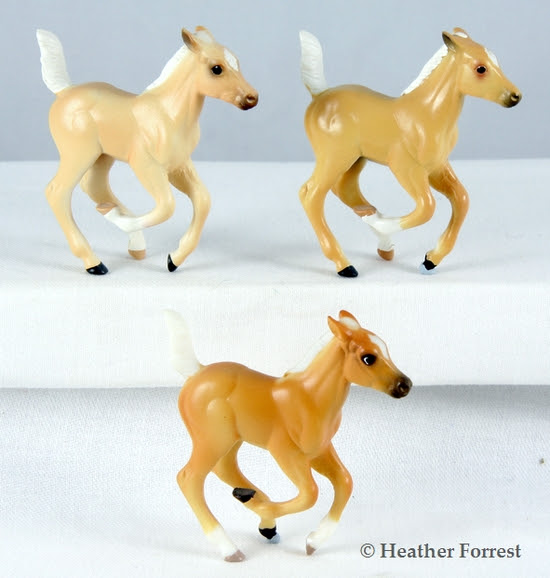 The two models on the top row are both from the #5922 Horse and Foal Set: American Quarter Horses - Palomino (2007-15) and Target special run #720599 Horse and Foal Set (2006) sets. There is no difference between the regular run and special run releases beyond the usual production variations. These models have a creamy palomino base colour with the white markings painted on over the base. Shading tends to be pale, reddish, and minimal.

On the bottom row is the G2 Cantering Foal from the #5302 Stablemates Puppies and Foals Play Set (2006-07). The white markings on this release are plain white plastic, the colour is less creamy and more orange-toned, and the shading on the face is dark.

The foals from the Horse and Foal Sets have socks on their near-hind and off-fore legs while the Puppies and Foals model has them on his near-fore and off-hind and a larger star. All have black hooves on their coloured legs and creamy hooves on their white legs. 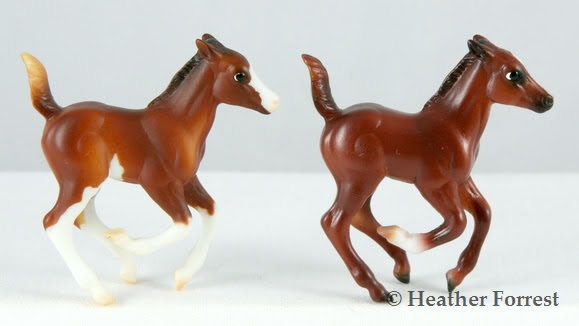 The model on the left is from the #5977 Stablemates 5-Piece Fun Foals (2009-10) while the one on the right is from the #5940 Mystery Foal Surprise Gift Set (2012-13). The Fun Foals model is usually slightly lighter, more richly shaded, with a flaxen tail tip. It has four high white stockings, a wide blaze, eye-whites, and belly spotting. The Mystery Foal is a much darker red chestnut with one small sock on the off-fore sock, eye-whites, and a small blaze. 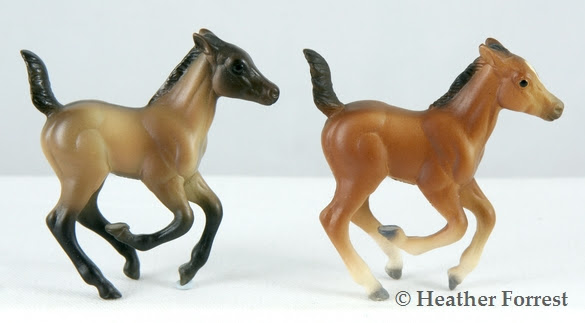 All of the bay foals are pretty distinctive. The darkest of the three is the foal on the left from the #5407 Stablemates Dude Ranch Play Set (2008-09). It has a dusty tan coloured body with chocolate points, a very dark head, and absolutely no white markings.

#59976 Warmblood Stallion and Foal (2000-02) on the right is a classic baby bay with creamy legs - not quite vague stockings - , a medium-brown body, and darker mane and tail. He has slate-grey hooves and an elongated star. 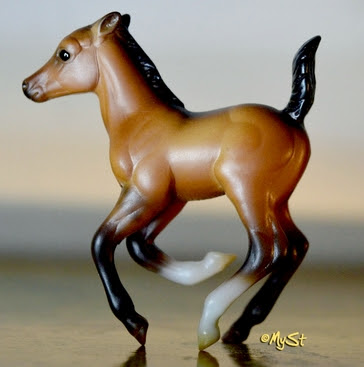 This foal from the #5886 Mystery Foal Surprise Gift Set (2015-Current) has a bay base-colour, but is actually a bay dun. The body colour is a richly shaded brown with chocolate points, leg barring, and socks on the near-hind and off-fore legs. 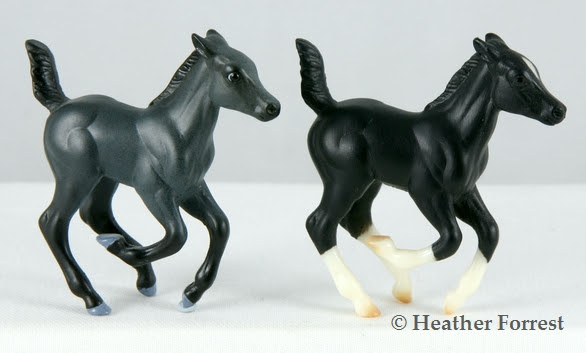 Some people may call the first foal black, but this model from the JCPenney Special Run #410512 Stablemate Parade of Breeds - Quarter Horse (2009) set is a dark grey with slightly darker flea-bites and black points. He has eye-whites and is without any other white markings. The colour could be called roan due to the flea-bites, but the dark head is lacking. The foal from the #5982 Stablemates Fun Foals Gift Pack (2002-06) on the other hand is a true, inky black. He should have four high white stockings and a star.