Gift Set: What's With All the Fanfare?

In 2000 Just About Horses subscribers were offered the opportunity to purchase an exclusive special run on the Traditional sized Iron Metal Chief. The run consisted of the big four decorator colours (Wedgwood, Florentine, Copenhagen, & Gold Charm) which would be distributed as a gambler's choice - you wouldn't know which one you had until you opened the box. All four models went by the name of Fanfare and were in celebration of Breyer's 50th anniversary.

Four years later Just About Horses offered their subscriber a rather similar special run. The colours were the same, and in keeping with the gaited nature of the original release, the Mini Fanfare mold of choice was the G1 Saddlebred. 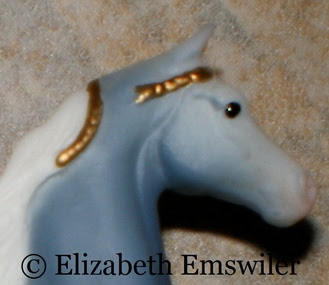 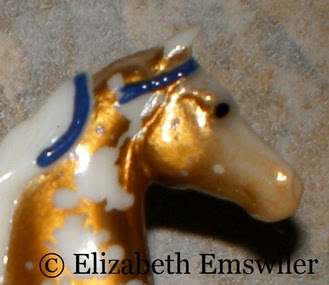 Models and pictures owned by Elizabeth Emswiler and used here by permission.

This time, unlike the Traditional special run, the four colours came as a complete set, but collectors weren't out of the woods yet, the sets came with a bonus, a gamblers choice G1 Draft Horse in one of four decorator snowflake colours.

I'm not sure whether the sugarplum colour was called such in the official announcement or if it was a later hobby invention, but it has entered into common usage. I wouldn't be surprised if we see the use of sugarplum start to die out as Identify Your Breyer, the most commonly used Breyer identification site, simply describes the model's colour as 'pink'.


The Mini Fanfare set was announced in the Sept/Oct 2004 issue and collectors began receiving their packages in late October. The models came luxuriously displayed in these lovely presentation boxes with a certificate of authenticity slipped inside. A total of 1,500 sets were made, which meant there were only 375 of each of the drafter colours available; why does this mold end up with all the hard to find releases?

Many thanks to Sharon Walbridge, Deb Walsmith, and Elizabeth Emswiler for providing pictures of this set from their collections!